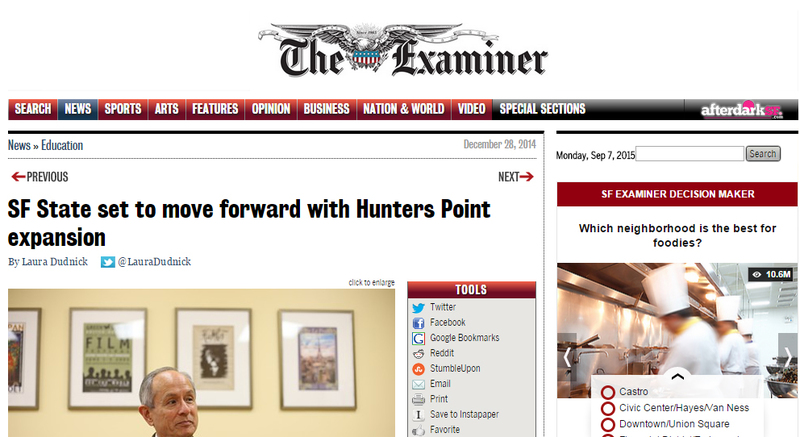 Next month, San Francisco State University plans to announce which programs it will bring to Hunters Point, where by fall 2017 the school intends to expand for the first time in its history.

SFSU President Leslie Wong told The San Francisco Examiner earlier this month that the institution hopes to place in the new campus two programs in the Science, Technology, Engineering and Math (STEM) fields that are both are award-winning and undergraduate.

The school will likely release the names of the programs in early January.

“We want to keep the theme of offering participants technical skills that might be helpful in them seeking employment from some of the technology and biotech businesses, from Mission Bay to Silicon Valley,” Wong said.

The programs are expected to occupy between 20,000 and 30,000 square feet of space at the former naval shipyard, where 3 million square feet total were allocated for various commercial and office space endeavors.

That overall development will also include the construction of 5,735 homes, 233 acres of parks and open space, and 125,000 square feet of neighborhood retail, such as grocery stores and restaurants.

Nearby at Candlestick Point, which is being developed by Lennar Urban in addition to the shipyard, there will be another 150,000 square feet of office and commercial space.

Wong said he has been talking with Lennar Urban for about a year and a half about expanding SFSU to Hunters Point, and with community leaders for the past six to eight months. The university will begin holding public outreach meetings in early winter to gauge the response from neighborhood residents.

“We’ve tried to ask ourselves not only what could we do, but what do the residents want?” Wong said. “That’s what these community meetings will be about.”

“We need a solid educational institute like San Francisco State there,” Hunnicutt said. “This is definitely going to be a wonderful and significant contribution to education in the Bayview-Hunters Point and shipyard area.”

Opening a branch of SFSU in the southeast corner of The City will add to what is becoming a blossoming area for education — Hunnicutt pointed out that San Francisco Unified School District is planning to open Willie Brown Middle School in August.

And in nearby Mission Bay, UC San Francisco has a campus and hospital. “In many ways, opening up a program there resonates deeply with our commitment to social

justice,” Wong said of the largely low-income neighborhood. “When I raised the specter of opening up a campus or service to Bayview-Hunters Point, it was overwhelmingly received by faculty and staff.”

Lennar Urban is also enthusiastic about the SFSU plans.

“Having a San Francisco State presence at the shipyard fits ideally with our vision for the site,” Kofi Bonner, president of Lennar Urban, said in a statement to The Examiner. “We have designed the shipyard to be an urban innovation district, with jobs, housing, entertainment and, importantly, educational opportunities. This would work very well with our plans.”

Wong said he also hopes to open at least one new program at the Hunters Point site. So far, dozens of faculty members and three departments — counseling, social work and computer science — volunteered to expand there. The new program, he added, will likely involve some sort of family support and training for parents.

“There’s enormous potential for us to make a difference,” Wong said.