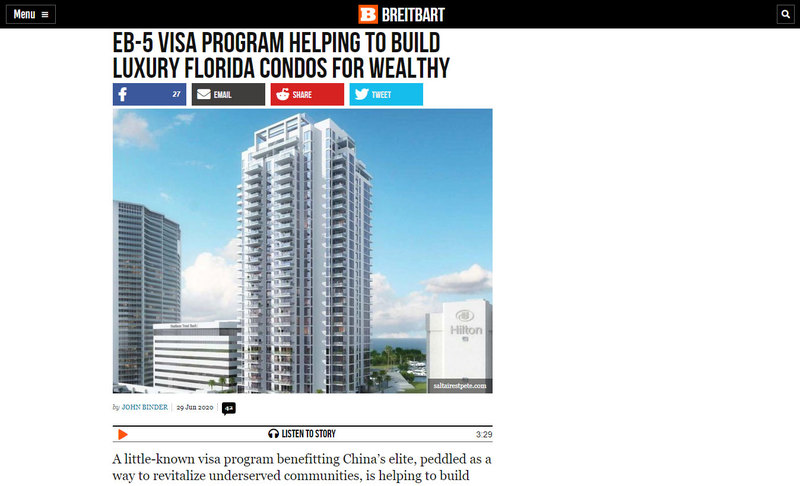 A little-known visa program benefitting China’s elite, peddled as a way to revitalize underserved communities, is helping to build luxury condominiums for the wealthy in St. Petersburg, Florida.

Under the EB-5 visa program, wealthy foreign nationals can claim to invest at least $900,000 in United States development projects and receive green cards for themselves and their family with eventual pathways to American citizenship.

The foreign EB-5 investor’s only requirement is to claim to have created ten U.S. jobs and revitalize “distressed” areas. Those areas, though, are often in wealthy zip codes to build luxury shopping centers and condos for the wealthiest of Americans.

In the latest case, luxury condos known as Saltaire St. Petersburg, located in downtown St. Petersburg, is getting help from foreign EB-5 investors who can pledge $900,000 minimum investments into the project.

The luxury condo building will be 35 stories high with nearly 200 “expansive luxury” units, starting at $1 million a unit.

As Breitbart News has reported, 10,000 foreign nationals and their families are allowed to enter the U.S. every year on the EB-5 visa. The overwhelming majority of EB-5 visas are rewarded to China’s elite — driving a migration of rich Chinese to cities across the country.

Another case, as CityLab noted, involved New York City’s Hudson Yards. The billion-dollar project, which has subsequently driven up rents in the neighborhood, was funded by foreign EB-5 investors:

Hudson Yards, of course, is nobody’s idea of distressed. Located at the source of New York’s High Line, it’s the most expensive real-estate project in U.S. history. It could not possibly qualify as distressed under the terms of the program, or any understanding of the word. In order to buy EB-5 visas at the lower rate ($500,000), immigrant investors must put their money behind projects in areas with high unemployment—a proxy for need.

Manhattan’s West Side may not suffer for lack of opportunity, but, as Kimmelman notes, New York real estate is a realm for Kurosawa-esque visionaries. The Related Companies, the developer behind Hudson Yards, raked in at least $1.2 billion in EB-5 funds for this project. To qualify, Related needed a work-around to bypass the distressed-area requirements—a pass that New York authorities were happy to issue.