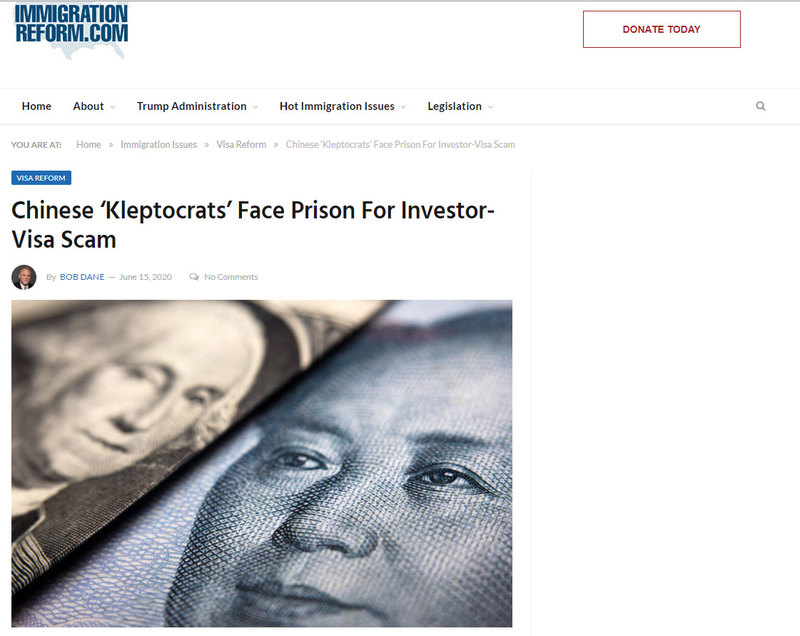 As if the fraud-ridden EB-5 cash-for-visas program didn’t have enough bad publicity, now comes a couple of Chinese nationals who, according to government investigators:

Amidst all their illicit wheeling and dealing, Shilan Zhao and Jianjun Qiao apparently did not create a single U.S. job – which is the foundational purpose for issuing EB-5 foreign-investor visas.

“One aspect of the EB-5 program that has not received much attention is its potential for abuse by kleptocrats or other fraud fugitives overseas to seek a safe harbor in the United States,” noted Ron Cheng, a former federal prosecutor who worked on the case.

Federal prosecutors, who had been trailing Qiao for six years, caught a break last month when he was extradited from Sweden, where he was living under a different name. Adding to the international intrigue, Qiao had become a citizen of the Caribbean nation of St. Kitts and Nevis.

Zhao – who resided stateside in the Seattle suburb of Newcastle, while tending other properties in Southern California and New York — pleaded guilty in 2017 to conspiring with her ex-husband to falsely claim they were still married, and lying about the source of her funds. Agreeing to forfeit her real-estate holdings, Zhao faces up to five years in prison.

The jet-setting Qiao pleaded not guilty to conspiracy to commit immigration fraud, international transport of stolen money, conspiracy to commit money laundering, and three counts of engaging in financial transactions in a criminally derived property. Scheduled for trial on July 28, he could face more than 50 years in prison.

Cheng called Zhao’s and Qiao’s scheme a new twist on “immigration fraud that often makes up an integral part of kleptocratic behavior.”

“In earlier cases, the immigration fraud vehicle might have been marriage fraud, through a U.S. citizen willing to make a payment to ‘marry’ the fugitive. With EB-5 as the vehicle, the difficulty of verifying the legitimate origin of the investment from overseas creates new challenges to detect the fraud.”