Man with ties to Seattle area extradited to U.S. to face money-laundering charges 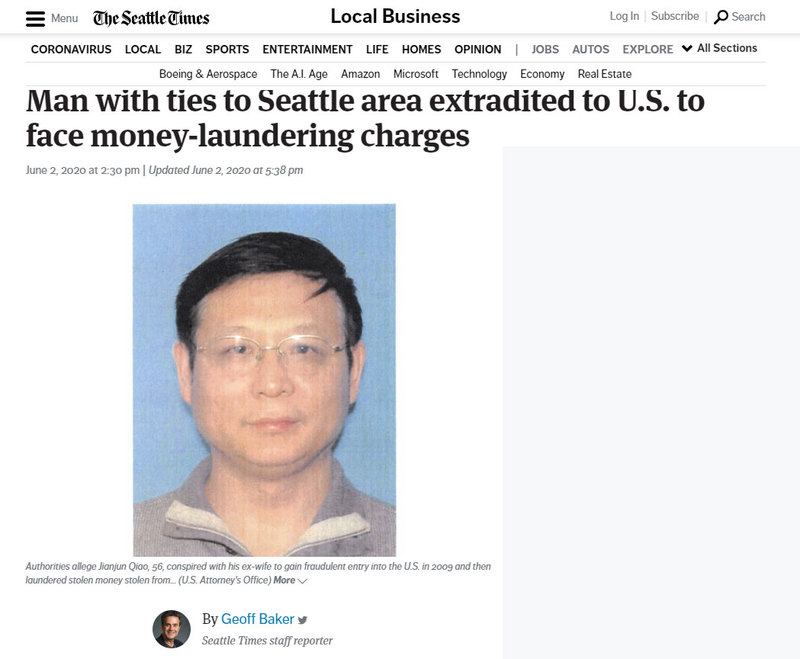 Authorities allege Jianjun Qiao, 56, conspired with his ex-wife to gain fraudulent entry into the U.S. in 2009 and then laundered stolen money stolen from China through a Newcastle home purchased in 2012 by a company in her name. (U.S. Attorney’s Office)

More than a decade ago, Chinese national Jianjun Qiao gained entry to the United States on a special visa program designed to create local jobs, and his purported wife later bought a five-bedroom home in Newcastle.

But after years on the run as one of China’s most wanted fugitives, Qiao, 56, was extradited from Sweden to Los Angeles on Friday to face charges he committed fraud on immigration documents while using U.S.-purchased properties as part of a multimillion-dollar money-laundering scheme. His supposed wife, Shilan Zhao, 56, already pleaded guilty to immigration fraud in 2017, telling federal authorities she and Qiao had actually divorced years before applying for EB-5 immigrant investor visas as a married couple.

Qiao pleaded not guilty in a Los Angeles courtroom Monday. A trial date has been set for July 28.

The case spotlights a federal EB-5 job creation program that has become a popular path for immigrants seeking U.S. green cards. Up to 10,000 permanent residency visas can be allotted annually to foreigners and their immediate families if they invest in a U.S. enterprise that creates at least 10 U.S. jobs; the vast majority of recipients have been from China.

Invest In The USA, an EB-5 trade association has estimated the program funded more than $2 billion in recent Puget Sound region development projects. Approved investors, spouses, and children get provisional residency visas that can be made permanent if they demonstrate the required job creation.

But critics have likened it to immigrants buying their way into the country, with a cottage industry of corporations regularly traveling to China to make pitches to lure investor capital. Among them: The sister of President Donald Trump’s son-in-law and special adviser Jared Kushner, whose family connections were touted during one such overseas visit.

In her guilty plea, Zhao admitted using a phony marriage certificate and false documents indicating the money she planned to spend had been legally obtained through her partial ownership in two flour companies.

The cash-for-visas program used to require a minimum investment of $1 million, or $500,000 in designated Targeted Employment Areas. The Trump administration recently raised those investment thresholds to $1.8 million and $900,000, respectively, and has faced pressure from Republican lawmakers to suspend the program as part of an expanded immigration crackdown.

Thom Mrozek, a spokesman for the U.S. Attorney’s Office in Los Angeles, said the case involving Qiao, Zhao, and the Newcastle home is one of only a handful to be prosecuted since the EB-5 program began in 1990. Sweden’s high court last summer rejected an extradition request to return Qiao to China on grounds he might be persecuted there because he’d joined a banned political party before fleeing that country in 2011.

Once the Swedish court freed Qiao, U.S. officials had him rearrested in Stockholm days later before its own extradition bid. The extradition was granted and Qiao was escorted by U.S. Marshals on a flight that arrived in Los Angeles on Friday.

A joint investigation by the Department of Homeland Security and the Internal Revenue Service alleged Qiao (aka Feng Li) used his decade-long position as director of a grain storehouse in China to embezzle millions of dollars from 2008 to 2011 and launder it through properties purchased in the United States. One of those properties was the 3,660-square-foot Newcastle residence, purchased in 2012 for $525,000 by his then-ex-wife Zhao; Zillow estimates the property is now worth $1.2 million.

A federal grand jury indictment in July 2014 alleged Zhao in 2008 used phony documents to claim marriage to Qiao despite their having divorced in China in 2001. Provisional visas were approved for the couple and one of their sons a year later after she had indicated plans to spend $500,000.