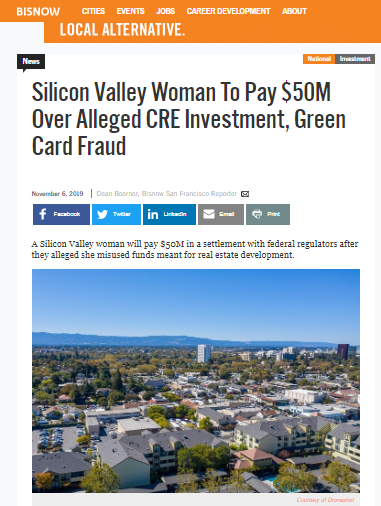 In a Securities and Exchange Commission notice released Monday, the SEC charged that Bethany Liou, 55, sold at least 90 investors a total of $45M worth of securities meant to "finance the acquisition, development, and operation of a mixed-use residential, commercial, and hotel development in Cupertino, California."

Instead, Liou allegedly put the funds in accounts under her name and used them as collateral for a line of credit. The settlement is the partial culmination of a lawsuit filed by Chinese investors seeking permanent-resident cards through the U.S. EB-5 visa program, but that lawsuit will continue.

Liou admitted no wrongdoing in the SEC settlement filed this week.

In 2016, when investors allegedly wired funds to Liou, the EB-5 program offered visas to foreign individuals who invested $1M in a new commercial enterprise that creates or preserves 10 or more jobs for U.S. workers, or $500K in a rural area or area of high unemployment.

Investment requirements have since been raised by the Trump administration, to $1.8M and $900K, respectively.

Created in 1990, the EB-5 program is meant to "stimulate the U.S. economy through job creation and capital investment by foreign investors," the SEC wrote. It is administered by the United States Citizenship and Immigration Services agency.

Each share in Liou's fund cost $500K, plus up to $55K for an administrative fee, with the nearly 100 participating investors wiring funds to an account named GCRC Cupertino Fund L.P. as instructed by Liou, according to the SEC. Neither Liou nor her attorney responded to requests for comment.

The settlement requires Liou to pay $48.2M in the 10 days following the settlement notice released on Nov. 4, and the remainder in several installments over the next year.