Green cards: Company in $50 million settlement promises to pay back would-be immigrant-investors, but some remain unsatisfied 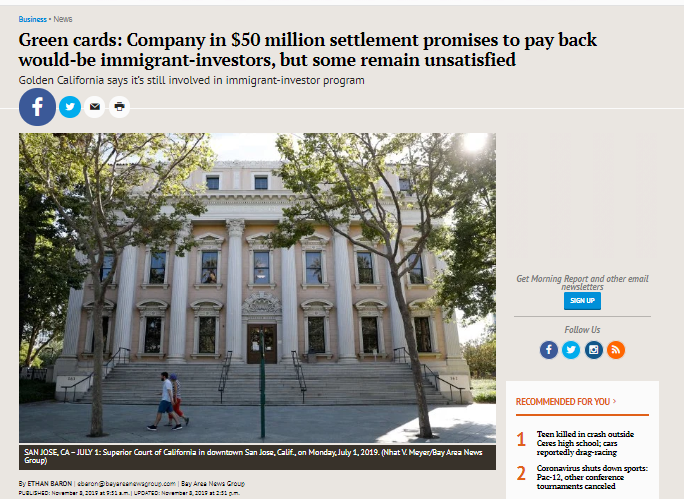 In a case centered on a controversial visa program that gives green cards to foreign investors, a company owned by a San Mateo county businesswoman hit with a $50 million settlement over allegedly misappropriated funds promises it will pay the money back — but a group of investors says the deal doesn’t address all their claims or all the damages they’ve suffered.

Bethany Liou, and her company Golden California Regional Center, earlier this week settled with the Securities and Exchange Commission, which accused her of diverting into her own accounts at least $45 million from foreign citizens intending to invest in a Cupertino real estate development, to qualify for green cards under the EB-5 immigrant-investor program.

At the time Liou’s investors handed over their money in 2016, the program required a minimum $1 million investment in a new commercial enterprise creating or preserving at least 10 full-time jobs, or $500,000 for enterprises in rural or high-unemployment areas deemed “targeted employment areas.”

Golden California, in a statement to this news organization, said it has been working with the SEC on an arrangement designed to return “100 percent of investors’ principal investments in the Cupertino Fund, and even a portion of their administrative fees.”

The company, solely owned by Liou, 55, said it did not admit to or deny the SEC’s allegations, but noted that the regulator has not accused it or its employees of any “intentional fraud,” and is not requiring it to pay a civil penalty. Golden California is not facing any suspension or barrier to its business, the company added.

“Through its other ongoing projects, (Golden California) remains committed to the EB-5 process, and helping foreign investment in the United States,” the company said.

In arriving at the settlement, the SEC considered Liou’s “meaningful cooperation,” the agency said.

A lawyer for a group of investors who are suing Liou and Golden California in Santa Clara County Superior Court for alleged fraud said Thursday she was confident Liou will pay back at least the $48 million the settlement said she must hand over within 10 days. But she said the deal falls short of compensating her clients for everything they lost.

“The arrogance of Ms. Liou in believing she can simply turn over the investment funds and a portion of the administrative fees to the SEC in late 2019 which were entrusted to her in good faith in 2016 by innocent investors without further ramification is concerning,” attorney Julie Bonnel-Rogers said in an email.

Her clients are seeking the right to inspect all records held by Golden California and Liou concerning the purported real-estate development they intended to fund to find out what was done with the money after they invested it, Bonnel-Rogers said.

“We have a right to understand how the funds were used and whether the funds generated any investment profit,” she said.

Possibly more important to her clients is the fact that requirements for the EB-5 program are soon to change, she said. Created in 1990 “to stimulate the U.S. economy through job creation and capital investment,” according to the SEC, the program will soon be more costly after the administration of President Donald Trump in July hiked the minimum investment amounts to $1.8 million and $900,000, effective Nov. 21.

Bonnel-Rogers said her clients may now be “priced out” of the program, and are deciding whether to add additional damage claims to their lawsuit as a result.

Their $500,000 investments were made to meet the specifications of the EB-5 program’s provision for funding projects in high-unemployment areas. It remains unclear how Golden California’s purported Cupertino project, which the SEC said was to include a residential, commercial and hotel complex, would meet those specifications.

U.S. Citizenship and Immigration, in an advisory explaining the coming changes to the EB-5 program, said gaming of the “targeted employment area” designation was usually accomplished by “gerrymandering” census tracts to link a “prosperous project location” to a “distressed community.”

Sen. Chuck Grassley (R-IA), applauding the program’s changes after they were announced, said the program had allowed “big-money” real estate interests to guide designation of high-unemployment areas so that “investment dollars intended for communities in need were being sucked up for glitzy projects in America’s most well-to-do neighborhoods.”

The program changes also include shifting authority for designating high-unemployment areas to the federal government from state and local governments.

Grassley and Sen. Dianne Feinstein (D-CA) in 2017 introduced legislation to scrap the EB-5 program, with Feinstein writing, “It is wrong to have a special pathway to citizenship for the wealthy while millions wait in line for visas.”

Stephen Yale-Loehr, a professor of immigration law at Cornell University who founded and formerly ran an EB-5 trade organization, noted to this news organization earlier this year that while most of the 10,000 EB-5 visas issued annually go to investors’ family members, thousands of investors put at least $500,000 into U.S. companies. “That’s a lot of money that helps, or at least can help, stimulate the U.S. economy and create jobs for U.S. workers,” Yale-Loehr said. “But it is complex and it has to be done well.”

In April, the federal government charged a man and woman with fraud, identity theft and obstruction of justice in connection with a housing, retail and restaurant development in Fremont and a housing development in Santa Rosa that were to be funded through the EB-5 program.

Liou in 2013 settled a civil lawsuit in federal court accusing her of fraud and elder abuse in relation to investments by three Chinese nationals in housing developments. She currently faces at least three other lawsuits in Santa Clara County Superior Court, one by other investors in the purported Cupertino project, one related to a loan dispute and another related to a contract dispute.