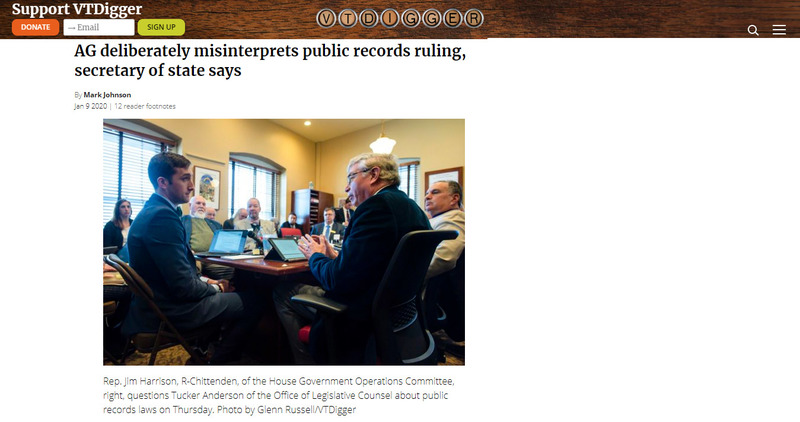 Attorney General TJ Donovan is using a “twisted interpretation” to improperly charge some who request public records, according to Secretary of State Jim Condos.

Condos told lawmakers Thursday that Donovan is deliberately misinterpreting a recent Supreme Court ruling that reaffirmed the public has a right to “inspect” documents for free and can only be charged when a “copy” is requested.

Since the ruling, Donovan has maintained taking a cellphone photo of a document constitutes a “copy,” which opens up the requester to charges for state officials’ time to prepare the document, including reviewing and blacking out protected or exempted information. Under state statutes, charges cannot be levied to “inspect” documents. In those cases, the preparation time is considered a cost of state government.

“I hate to, I’m not trying to throw TJ under the bus, but frankly, he looked for a way around the law,” Condos said in an interview during a break in the House Government Operations Committee hearing.

Donovan said Condos was being “naive” that a “copy” in the digital age could only be a paper record. The attorney general contends courts have defined a copy as “a record the requestor could keep and review wherever and whenever they choose.”

In an interview, the attorney general said he hoped lawmakers would clarify what constituted a copy. He insisted he had no intention to ask lawmakers to expand the statutes and allow charges for inspection only. However, he complained that private law firms can inspect records for free for information they can later use to sue the state.

“If they’re going to take stuff with them to sue us, I’m not paying for a private law firm to sue the state of Vermont,” he said. About half of the 150 public records requests the Attorney General’s Office received in 2019 were from “firms,” including law firms, according to Charity Clark, the attorney general’s chief of staff.

Donovan said he hoped the Legislature would clarify what constituted a copy.

“I want the Legislature to write a law that everybody understands and everybody can follow,” Donovan said. “That’s why we need clarity so we don’t engage in these kinds of hypotheticals about what constitutes a copy” and “what is reimbursable and not reimbursable.”

He said the lawmakers should draw “bright lines.”

VTDigger Editor Anne Galloway told committee members Donovan had been obstructionist on public records requests that, if granted, could have prevented further harm. She cited documents connected with the EB-5 fraud in the Northeast Kingdom and recent allegations of misconduct at the state’s only women’s prison as examples of requests for information the Attorney General’s Office had denied. VTDigger has sued the Attorney General’s Office multiple times over access to records.

Charging fees can limit access to records, Galloway and Condos testified. In the EB-5 case, Galloway said the Attorney General’s Office quoted a charge of $200,000 to review records of state officials to find out what and when they knew about the fraud.

“Vermont state government and municipalities are in the habit of hiding bad behavior, mistakes and embarrassing situations the public has a right to know about,” Galloway said. In the EB-5 case, records disclosure when originally requested could have helped contractors and investors who lost money, she said. Galloway called the need for full public records disclosure “a moral issue” more than a legal one.

Condos and Galloway said better management of records, removing personal information ahead of time, for example, would make responding to records requests simpler.

Condos also reiterated his call for an ombudsperson, who could hear appeals from the public, including media organizations, when requests are denied before they go to court. The ombudsman, he said, could also help state agencies better understand how to respond to requests. He and others also called for eliminating or condensing the more than 270 exemptions to the records act.

Chairs of the House and Senate committees that deal with public records issues were noncommittal on whether they would weigh in on the controversy, including clarifying the definition of a “copy.”

“This is an exploration,” said Rep. Sarah Copeland Hanzas, D-Bradford, chair of the House Government Operations Committee, after its hearing Thursday.

“We need to take a look at all the issues and if there’s language change that is warranted after we’ve taken a look at the landscape and heard all the questions and the interpretations, we may explore that. No decisions have been made about that,” she said.

One Government Operations Committee member, Rep. Jim Harrison, R-North Chittenden, said he spoke to Supreme Court Justice Paul Reiber shortly after the Doyle vs. the City of Burlington Police Department ruling, which upheld a citizen’s right to “inspect” police body cam footage free of charge. It was a 3-2 split decision and Harrison said he asked if Reiber was trying to make more work for his committee.

Harrison also raised concerns about how to prevent “fishing expeditions” that can tie up public officials fulfilling complicated requests.

Earlier in the week, Sen. Jeanette White, D-Windham, who chairs the Senate Government Operations Committee, said “all sides” would be heard and that if any action on public records was taken, she wanted her committee members to draft a bill together. Sen. Alison Clarkson, D-Windsor, promised the debate would be robust.

When Condos appeared before Senate Government Operations on Tuesday, he pulled out his cellphone and took a picture of his prepared testimony and asked: “What’s the cost to the government? Zero.”

“That’s the discussion that’s up in the air,” Condos said.