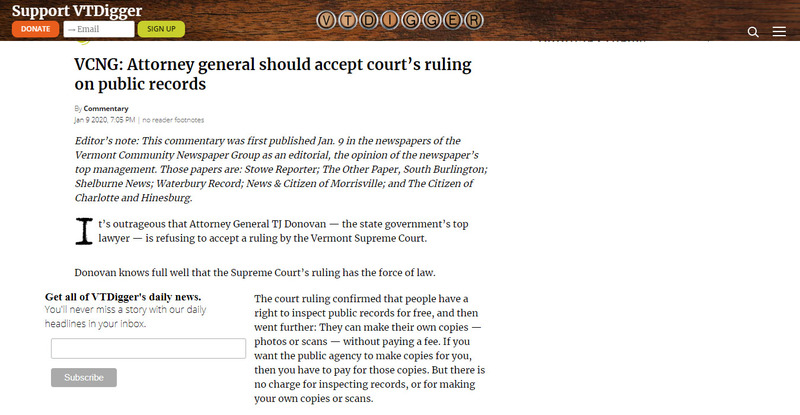 It’s outrageous that Attorney General TJ Donovan — the state government’s top lawyer — is refusing to accept a ruling by the Vermont Supreme Court.

Donovan knows full well that the Supreme Court’s ruling has the force of law.

The court ruling confirmed that people have a right to inspect public records for free, and then went further: They can make their own copies — photos or scans — without paying a fee. If you want the public agency to make copies for you, then you have to pay for those copies. But there is no charge for inspecting records, or for making your own copies or scans.

Donovan says the court is wrong. He says his office handles a lot of tricky cases and lawyers have to spend hours and hours poring through documents to make sure no secrets are improperly disclosed. He wants the people requesting those records to pay for that lawyer time.

Problem is, these are the public’s records — people have a right to easy access, so they can understand what their government is doing. An informed citizen is the key to our democracy. Is the recordkeeping so bad in Donovan’s office that public records can’t be separated from records exempt from disclosure? Vermont’s courts do it with ease, and so do most of the school, municipal and state agencies we deal with.

Exhibit A is VTDigger, which fought a lonely battle to prove that the Jay Peak EB-5 expansion projects were a fraud. A fraud indeed: Millions of investors’ dollars were swindled, the chief architect of the scam went to jail and had to forfeit $81 million, and the federal government shut down the Vermont EB-5 Regional Center for utter incompetence. All this emerged from Digger’s reporting over a period of years when the state fought tooth and nail to avoid handing over documents in the case. It took request after request, and heavy legal fees, for Digger to get part of what it needed.

When the facts finally started to emerge, you’d think the attorney general’s office would have smelled the rat, and investigated what happened. It didn’t. Rather, it was federal officials who pursued the details about the scandal that occurred right under the noses of Vermont’s most prominent politicians.

Meanwhile, the state used a lawsuit filed in the case as an excuse not to disclose documents detailing how the fraud went on for a decade. Once that lawsuit was settled, Donovan still kept the records secret, because the screwed-over investors in Jay Peak had filed a suit of their own. Litigation, now.

Also conveniently, the case was settled before any sworn statements were taken from witnesses, so state officials involved in the EB-5 program did not have to testify under oath about their actions. Those depositions also would have become public.

And now, after years of foot-dragging, the state says some crucial records have vanished.

But, to the contrary, Donovan not only has the gall to defy the Supreme Court, but he’s lobbying the Legislature to enact fees for viewing and copying public records.

Access to public records should not be an issue at all. They’re the public’s records, and they should be managed for the public. Most public agencies in Vermont already do it. And, since most public records are electronic, it’s easy to store them properly. All it requires is good management. If an agency’s recordkeeping is sloppy, the public shouldn’t have to pay for that incompetence.

TJ Donovan thinks that making public records readily available is somehow a diversion from the attorney general’s work. In fact, it’s part of the job.