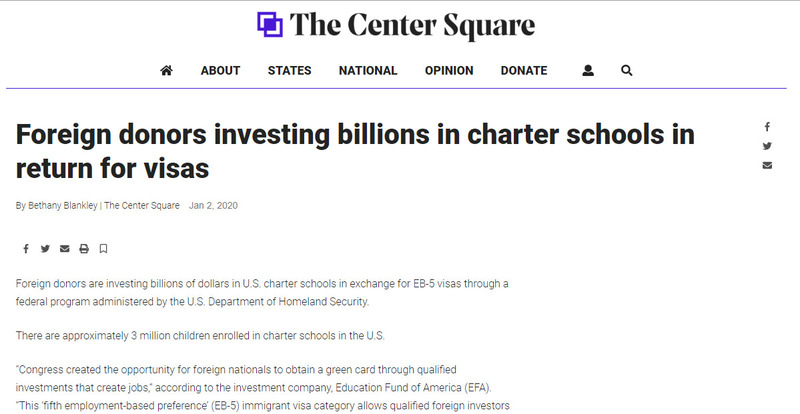 Foreign donors are investing billions of dollars in U.S. charter schools in exchange for EB-5 visas through a federal program administered by the U.S. Department of Homeland Security.

There are approximately 3 million children enrolled in charter schools in the U.S.

“Congress created the opportunity for foreign nationals to obtain a green card through qualified investments that create jobs,” according to the investment company, Education Fund of America (EFA). “This ‘fifth employment-based preference’ (EB-5) immigrant visa category allows qualified foreign investors to invest in a business that benefits the U.S. economy by creating or preserving at least 10 full-time jobs.”

The rule change also clarifies that only cities and towns with a population of 20,000 or more outside of metropolitan statistical areas may qualify as a targeted employment area (TEA).

The minimum amount required for investment is $900,000 if the foreign investment is directed to a rural and/or high unemployment area. Approximately 10,000 green cards are available through the EB-5 program every year. According to the Center for Immigration Studies (CIS), the eligibility list is “heavily backlogged for EB-5 investors from China.”

CIS argues the EB-5 program is ripe for embezzlement, “controversial and fraud-flecked,” while EFA argues it “is one of the most flexible paths to obtaining a green card.”

The program allows foreign investors to target real estate markets in need of funds for land and construction, furniture and equipment, start-up costs, or working capital. EFA and other offices of CIS help facilitate the process. In return, they can apply for EB-5 visas, and ultimately, green cards.

Foreign investors are neither required to manage the day-to-day operations of the businesses they invest in nor to live in the region where they invest. Foreign fund sources can also be legally given in the form of gifts, loans, and divorce settlement money. Borrowed investment funds qualify as long as the assets of the targeted U.S business does not secure the loan.

According to EFA’s website, half of the 28 campuses in eight states it helped build through the EB-5 program report significant financial losses due to high rents imposed by the development partner of the fund.

One new school in Charlotte, North Carolina, Lake Charter Academy, received $3 million from Chinese investors, and parents are questioning where the money went, according to a report by the Arizona Republic. The school has no cafeteria or gym and its small library contains donated books.

The report followed an investigation into millions of Chinese dollars pouring into Arizona charter schools and a San Diego charter school company charged with $50 million in fraud.

Reports of other charter schools experiencing similar problems occur nationwide. According to KUTV in Salt Lake City, the American International School of Utah, initially funded with $5 million in EB-5 investments, closed this year and fired its executive director after an audit revealed $500,000 in federal and state special education money was missing.

CIS reported on mysterious deaths of officials allegedly linked to unresolved EB-5 corruption and financial crimes in South Dakota. In California, it reported on several EB-5 investors who were recently indicted on several counts of conspiracy and wire fraud for the misuse of hundreds of millions of dollars.

This May, a federal grand jury in Vermont filed a series of criminal indictments against four individuals for misusing $200 million in EB-5 funds.

This September, $40 million in EB-5 investment funds planned to convert an abandoned rayon manufacturing plant into a job-creating, new-era enterprise in Front Royal, Virginia, ended with the entire top tier of the Warren County government (20 people) being indicted after $21 million went missing and the local sheriff committed suicide.

CIS argues the EB-5 program should be shut down. Companies committed to investing foreign dollars into expanding charter schools argue such financing is the only source of revenue to help the schools initially break ground.