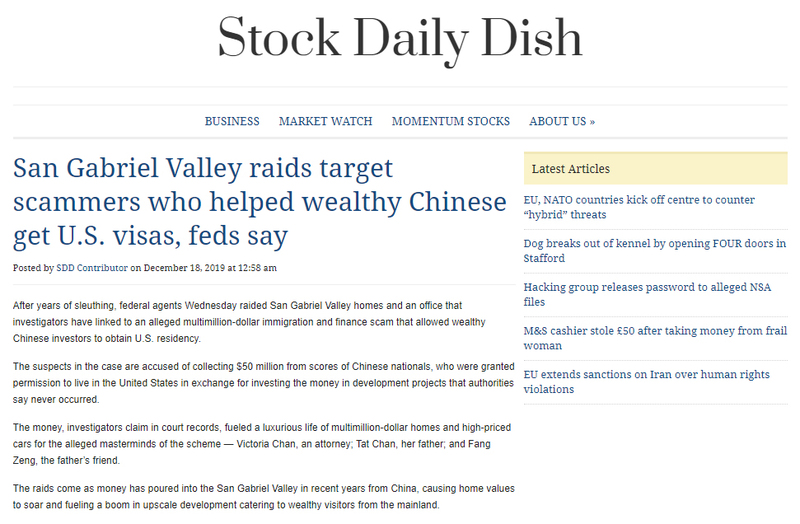 After years of sleuthing, federal agents Wednesday raided San Gabriel Valley homes and an office that investigators have linked to an alleged multimillion-dollar immigration and finance scam that allowed wealthy Chinese investors to obtain U.S. residency.

The suspects in the case are accused of collecting $50 million from scores of Chinese nationals, who were granted permission to live in the United States in exchange for investing the money in development projects that authorities say never occurred.

The money, investigators claim in court records, fueled a luxurious life of multimillion-dollar homes and high-priced cars for the alleged masterminds of the scheme — Victoria Chan, an attorney; Tat Chan, her father; and Fang Zeng, the father’s friend.

The raids come as money has poured into the San Gabriel Valley in recent years from China, causing home values to soar and fueling a boom in upscale development catering to wealthy visitors from the mainland.

Investigators said Wednesday’s searches targeted a scheme that exploited a little-known type of immigration visa reserved for high-end investors that has been beset by poor oversight and claims of fraud.

Each year, the government issues thousands of temporary residence visas through its Immigrant Investor Program. To qualify for the visas, immigrants must typically invest at least $1 million into a U.S. business venture, but the amount required is cut by half if an investment project is located in an area of high unemployment and is designed to create full-time jobs. If a project ultimately meets the visa program’s requirements, the investors are granted permanent legal residence in the U.S.

Over the last several years, the Chans and Zeng have collected the half-million-dollar ante from more than 100 Chinese nationals and submitted plans to federal officials for several development projects that didn’t exist, according to an affidavit agents submitted to a judge who granted warrants to search the properties.

No one has been arrested or charged in the investigation. The Chans and Zeng could not be reached for comment.

Wednesday’s raids centered on the small office of the California Investment Immigration Fund — a corporation the Chans set up in 2008 under the visa program to solicit investors. The office is located inside the Hilton San Gabriel on a bustling stretch of Valley Boulevard lined with Chinese businesses.

The front windows of the office were decorated with red and gold Chinese good-luck symbols alongside miniature American flags. Several copies of a Chinese book, “Into the United States,” featuring a red, white and blue American flag cover, were displayed.

In addition to a sign advertising the visas, Chinese lettering on the windows offered services including school admissions, real estate investment, life insurance and legal services. Two homes in Arcadia and South El Monte owned by the Chans were searched as well.

With the raids, investigators hoped to confiscate computer files, banking records and other documents they said would shed more light on a tangle of six- and seven-figure financial transactions among dozens of bank accounts in China and the U.S.

One outstanding question is which of the Chinese investors were either complicit or victims in the alleged fraud, authorities said. Several people who contributed money have raised investigators’ suspicions.

Some of the investors, for example, are on a Chinese government list of most-wanted fugitives, accused of bribery and other crimes, according to the affidavit. Others did not invest their own money but allegedly used funds loaned to them from the suspects’ investment fund.

Interest in obtaining EB-5 visas, as they are known, has , in large part because of demand from wealthy Chinese citizens. After issuing only 350 of the visas in 2005, the government granted 9,500 of them in 2015, and 85% of those went to Chinese people, the affidavit said.

A 2013 report by the watchdog arm of the Department of Homeland Security found serious problems with the oversight of the EB-5 program. Immigration officials, the report found, had failed to effectively manage the part of the program that the Chans and Feng were allegedly exploiting.

U.S. Citizenship and Immigration Services is “limited in its ability to prevent fraud or national security threats that could harm the U.S., and it cannot demonstrate that the EB-5 program is improving the U.S. economy and creating jobs for U.S. citizens as intended by Congress,” the Office of Inspector General report concluded.

Such concerns over poor oversight and some highly publicized scams led the North American Securities Administrators Assn., an advocacy group, to label EB-5-related fraud as to investors.

And earlier this year, Sens. Dianne Feinstein (D-Calif.) and Charles E. Grassley (R-Iowa) cited the problems while introducing legislation that would eliminate the program.

In their affidavit, agents from the FBI and an investigative arm of the Department of Homeland Security laid out the case against the Chans and Zeng, which appears to have been going on for years.

In seeking approval for their investment fund in 2008, the father and daughter said their projects would focus on real estate developments, especially in the restaurant and hotel industries.

As part of the investigation, agents found 72 bank accounts linked to the investment fund or one of many holding companies affiliated with it. From 2009 to 2016, approximately $50 million was wired or deposited into the accounts, the affidavit said. Most of the money originated from accounts in mainland China or Hong Kong.

About $15 million of the money was used to purchase several personal homes for the Chans and Zeng, including a four-bedroom home in Arcadia that was bought in Zeng’s name in 2011 for $3.2 million, according to the affidavit.

The trio also used the money to purchase an array of business properties, such as $2.25 million they spent in 2012 for a vacant lot off Highway 111 in Indio and $5.2 million in 2015 for vacant land in Rancho Cucamonga.

Despite the purchases of open land, agents found no significant work was ever done on any of the proposed projects.

“No real construction took place at any of the proposed project locations and very few, if any, actual full time American jobs were created,” an FBI agent wrote in the affidavit.

Photographs that investigators snapped of some of the locations of proposed projects in 2013 and again in 2016 showed no progress, the agent said.

One site on South Hacienda Boulevard in the City of Industry remains a vacant lot surrounded by a chain-link fence, the agent wrote. Signs in Chinese and English read “retail shops for lease” and “partnerships welcome.”

About 30 of the investors received some or all their money back — amounting to about $10 million — but concealed the refunds from U.S. officials and have continued to pursue legal permanent residence in the country, agents found.

In June, investigators sent an undercover informant into the office to meet with Victoria Chan. Posing as a representative of an interested investor and wearing a concealed recorder, the informant was charged $200 before he was allowed to see Chan, who told him a $500,000 investment would be returned within five years, the affidavit said.

Surveillance teams also followed Tat Chan and Zeng when they traveled earlier this year from China to the U.S. for a few weeks’ stay. Agents also trailed Victoria Chan as she moved between the office and her home in her Porsche SUV, according to the affidavit.