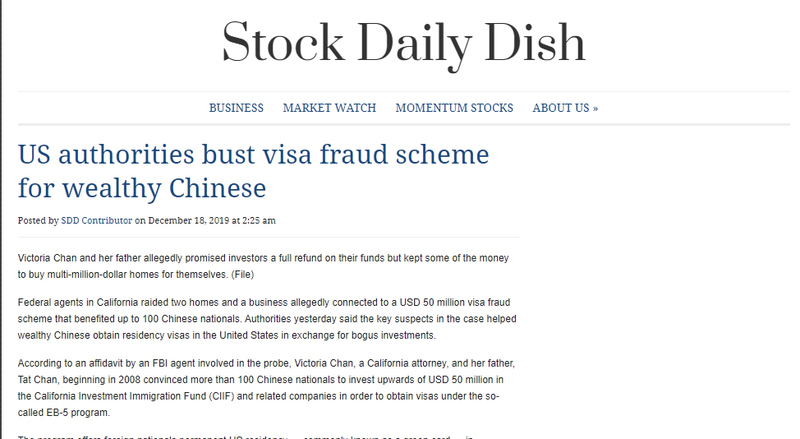 Victoria Chan and her father allegedly promised investors a full refund on their funds but kept some of the money to buy multi-million-dollar homes for themselves. (File)

Federal agents in California raided two homes and a business allegedly connected to a USD 50 million visa fraud scheme that benefited up to 100 Chinese nationals. Authorities yesterday said the key suspects in the case helped wealthy Chinese obtain residency visas in the United States in exchange for bogus investments.

According to an affidavit by an FBI agent involved in the probe, Victoria Chan, a California attorney, and her father, Tat Chan, beginning in 2008 convinced more than 100 Chinese nationals to invest upwards of USD 50 million in the California Investment Immigration Fund (CIIF) and related companies in order to obtain visas under the so-called EB-5 program.

The program offers foreign nationals permanent US residency — commonly known as a green card — in exchange for investments of at least USD 500,000 in a US business that must also create 10 American jobs.

“As a result of the fraudulent scheme, many foreign nationals were able to improperly obtain US green cards through the EB-5 visa program, even though those foreigners did not in fact truly invest in US businesses, nor were new American jobs created,” FBI special agent Gary Chen wrote in the affidavit.

Chen said several of those who benefited from the program were fugitives on China’s 100 most wanted list, charged with crimes such as bribery and abuse of power.

Nevertheless, at least three of the bogus investors were able to obtain green cards even though their applications contained false information, Chen said. Victoria Chan and her father allegedly promised investors a full refund on their funds but kept some of the money to buy multi-million-dollar homes for themselves and for Tat Chan’s female companion, Fang Zeng, a Chinese national.

They also submitted plans to federal authorities for various development projects that never got off the ground. Officials said no arrests have been made yet in the case and no formal charges have been filed. The EB-5 program was created in 1990 to help stimulate the US economy through job creation and capital investment from foreign nationals.

Nearly 90 percent of EB-5 visas were issued to Chinese nationals in 2014, when the program reached its quota of 10,000 visas and had to stop accepting applications.