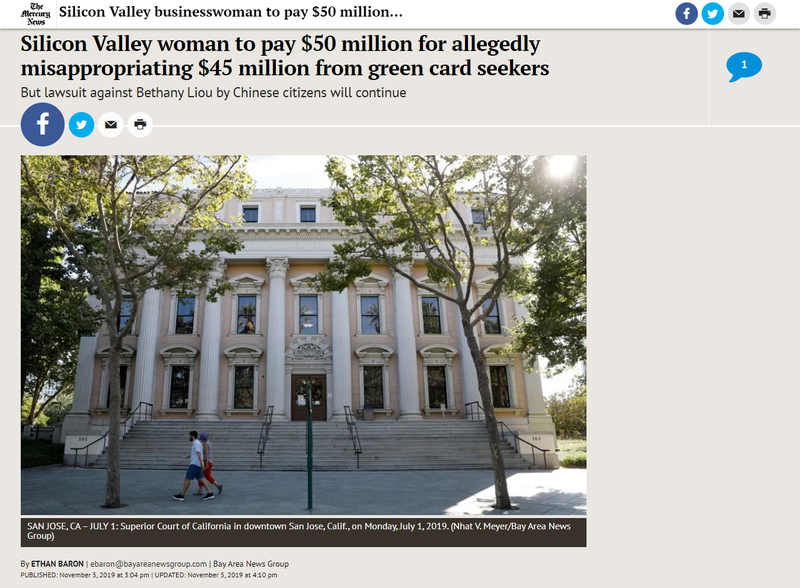 But lawsuit against Bethany Liou by Chinese citizens will continue

San Mateo County businesswoman Bethany Liou has agreed to pay $50 million in a settlement with federal regulators who accused her of misappropriating at least $45 million from foreign citizens who were seeking U.S. green cards through investments in a Cupertino real estate development.

Instead, the money went into accounts in Liou’s name, according to the Securities and Exchange Commission’s notice of the settlement. Liou did not admit wrongdoing.

Central to the case is the controversial EB-5 visa program, which allows foreign citizens to put money into U.S. companies in exchange for highly prized permanent-resident cards that provide a path to citizenship. At the time Liou’s investors handed over their money in 2016, the program required a minimum $1 million investment in a new commercial enterprise creating or preserving at least 10 full-time jobs, or $500,000 for enterprises in rural or high-unemployment areas deemed “targeted employment areas.”

The EB-5 program was created in 1990 “to stimulate the U.S. economy through job creation and capital investment,” according to the SEC. In July, the administration of President Donald Trump jacked up the minimum investment amounts to $1.8 million and $900,000, and shifted authority for designating high-unemployment areas to the federal government from state and local governments.

Sen. Chuck Grassley (R-IA), applauding changes that will take effect Nov. 21, said the EB-5 program had allowed “big-money” real estate interests to guide designation of high-unemployment areas so that “investment dollars intended for communities in need were being sucked up for glitzy projects in America’s most well-to-do neighborhoods.”

U.S. Citizenship and Immigration, in an advisory explaining the EB-5 changes, said gaming of the “targeted employment area” designation was usually accomplished by “gerrymandering” census tracts to link a “prosperous project location” to a “distressed community.”

Liou, according to a lawsuit filed this summer by a group of Chinese investors accusing her of fraud, took their $500,000 each under the targeted employment area provision of the EB-5 program, purportedly putting the cash into the “Cupertino Fund” to pay for a real-estate development.

The Securities and Exchange Commission, in announcing this week’s settlement with Liou, said money in the Cupertino Fund was to go into a “mixed-use residential, commercial, and hotel development in Cupertino.” But Liou, 55, directed the investors’ money into accounts in her name and then “pledged those funds as collateral for a line of credit,” according to the SEC.

“Liou never transferred the investment funds to the developer of the Cupertino-based project,” the SEC notice said, adding that her handling of the funds broke securities law against misleading investors through untrue statements or omissions of material facts.

Under the settlement’s terms, Liou is to pay $48 million within 10 days, and the remainder over the next year. The SEC said it would “seek to distribute the money to the Cupertino Fund investors.”

Representing the two dozen investors suing Liou — who are among at least 90 investors whose funds are at issue in the SEC settlement — said the law firm would cooperate with the SEC to expedite return of the money. The lawsuit will continue, as many questions remain unanswered, lawyer Julie Rogers of Structure Law Group said in an email. “We are seeking further damages, a forensic accounting and complete access to the books and records of the Cupertino Fund,” she said.

But, Rogers added, “I believe my clients’ life-long hopes of receiving a green card and gaining residency legally through a government-sanctioned program have been permanently thwarted.”