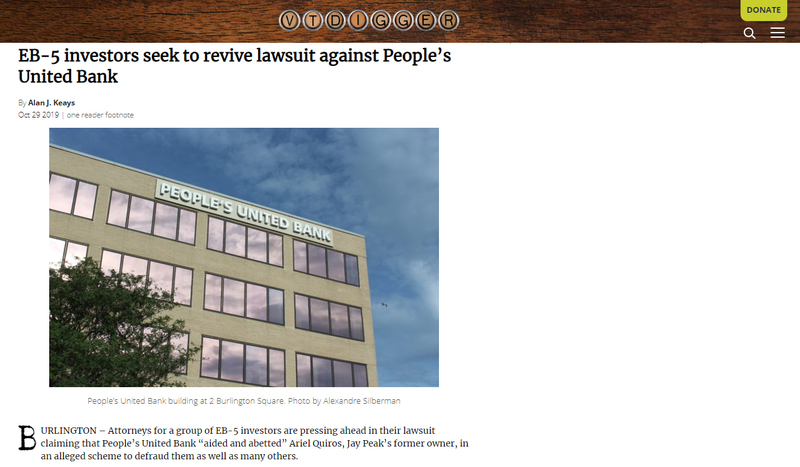 Attorneys for a group of EB-5 investors are pressing ahead in their lawsuit claiming that People’s United Bank “aided and abetted” Ariel Quiros, Jay Peak’s former owner, in an alleged scheme to defraud them as well as many others.

Legal teams for both the investors as well as the Connecticut-based bank spent all day Tuesday in federal court in Burlington arguing about whether the latest lawsuit brought by the investors should be allowed to move forward.

Judge Christina Reiss’ repeated questioning of the attorneys on both sides at times led to comparisons of the claims in the case to actions that could be taken after purchase of a termite-infested home or a car that is a lemon.

Attorneys cited other cases to back up their arguments, with frequent references to Bernie Madoff, the New York City financier busted in one of the largest Ponzi schemes in history.

Reiss in March had thrown out a previous lawsuit brought by the EB-5 investors against the bank, but allowed their attorneys to file an “amended complaint” to revive their claims. The judge at that time said she was struggling with the “generalized” nature of the allegations.

That amended complaint was filed, and a lawyer for People’s United Bank again moved to have it tossed out, prompting the marathon court hearing Tuesday.

Reiss, speaking as the hearing drew to a close late in the afternoon, said she would take the arguments under advisement before issuing a written ruling.

“We made a lot of effort to try to get it right,” Harley Tropin, a lawyer for the investors, told the judge of the changes in the most recent lawsuit. ”We tried to answer your questions.”

At that March hearing, Reiss had said she had trouble tying the claims in the filing to specific investors and then determining what damages, if any, each may have suffered as a result.

The alleged fraud scheme involved more than 800 foreign EB-5 investors who each put $500,000, plus administrative fees, into a series of eight development projects in Vermont’s Northeast Kingdom.

Bill Stenger, the former CEO of Jay Peak, deposited investor monies in the Burlington branch of People’s United Bank and transferred funds to a Raymond James Financial Services account controlled by his partner, Ariel Quiros in Florida. Through Raymond James, Quiros put the money in treasury notes and leveraged the notes for as much as $100 million in margin loans, federal regulators say. Under agreements with investors, the money was supposed to be held in escrow for EB-5 development projects in the Northeast Kingdom.

Raymond James settled with the Jay Peak receivership in 2017 for $150 million.

Quiros and Stenger have pled no contest to 52 counts of securities fraud brought by the Securities and Exchange Commission.

Reiss said at the hearing Thursday that the investors’ attorneys “did separate out who is bringing what claim and for what reasons.”

“That is something that I asked you to do,” she added, “because it seemed unlikely to me that everybody had the same damages and I think you accomplished that.”

James Stricker, an attorney representing People’s United Bank, reiterated throughout the hearing that the case should be dismissed because the lawsuit still lacked specifics.

“We shouldn’t have to guess what the plaintiffs are claiming,” he said.

Stricker repeatedly asked who it was at People’s United Bank that the investors’ lawsuit allege engaged in illegal activity. “They don’t say,” Stricker said.

Tropin countered that a written confession is rare. He argued that there was plenty of circumstantial evidence for his clients to prove their case, or at least let it proceed to a trial for a jury or judge to decide.

He said many red flags were raised over several years about the EB-5 projects that should have alerted People’s United Bank of the alleged fraud by the developers.

He cited concerns raised in February 2012 by Douglas Hulme who blew the whistle on the alleged Ponzi scheme, informing 100 immigrant attorneys that Jay Peak’s financials were not on solid ground.

Hulme, owner of Rapid USA, an EB-5 middleman, had worked for Jay Peak at that time. He later broke away after alerting others to what he saw going on.

The proposed class-action lawsuit currently has seven investors as plaintiffs.

Among the accusations in the filing is an allegation that People’s United Bank allowed Quiros to use investors funds that had been in escrow accounts for certain Jay Peak development projects to purchase the northern Vermont ski resort in 2008.

At the time of the bank transfer, Mont Saint-Sauveur International, which owned Jay Peak, said in a letter that the funds meant for developments at the resort, known as Phase I and Phase II, “may not be used in any manner, including as collateral or a guarantee, to fund the purchase of the Jay Peak Resort.”

“In reality,” the lawsuit brought by Tropin stated, “Quiros diverted over $20 million in funds raised from investors in the first two Projects to purchase the resort, which rendered the Phase I and Phase II Partnerships insolvent.”

The filing added, “Each earlier offering depended on transfers of cash from later offerings to cover its insolvency – the hallmark of a Ponzi-scheme.”

In addition to the People’s United Bank, the lawsuit names as defendants, David Gordon, a lawyer who worked for Quiros who has since been terminated and the firm Gordon worked for, MSK of New York City.

Both Gordon and the law firm are seeking to have the lawsuit dismissed.

Quiros was indicted by a federal grand jury in Vermont in May along with his former business partner, Bill Stenger, who had been the resort’s CEO and president, as well as two of their associates.

They face charges of wire fraud and making false statements to the government regarding another EB-5 project in Vermont they led, called AnC Bio Vermont.

That failed $110 million proposal called for the construction and operation of a biomedical research center in Newport.

The criminal charges came more than three years after federal and state regulators brought civil lawsuits against Stenger and Quiros alleging the two men misused $200 million of the more than $350 million they raised from EB-5 investors for their development projects.

The Hotel Jay at Jay Peak Resort in June.

Both Stenger and Quiros have since reached financial settlements to those civil actions, with both neither admitting or denying the investor fraud allegations leveled against them.

The criminal case against each remains pending, and they both have pleaded not guilty.

He pointed to settlements with various parties that had been reached by a court-appointed receiver now overseeing Jay Peak, including the Raymond James settlement.

In addition, some investors, Stricker said, have been allowed to “redeploy” their $500,000 EB-5 investments into other projects.

“They have not pled damages,” Stricker said, later adding, “I don’t know exactly what they are claiming, other than they want damages.”

Tropin, the investors’ attorney, had said earlier in the hearing that even with the Raymond James settlement and the sale of the properties at the center of the case, including Jay Peak, there is still expected to a “shortfall” to investors of more than $200 million.

He added that any money recovered by investors would be an “offset,” that could be determined at a later time. Investors, Tropin said, wouldn’t be “double-dipping” as a result of this case, adding that the judge wouldn’t allow such a thing to happen.

“We appreciate the time you’ve given us today,” Tropin told Reiss at one point in the daylong hearing.