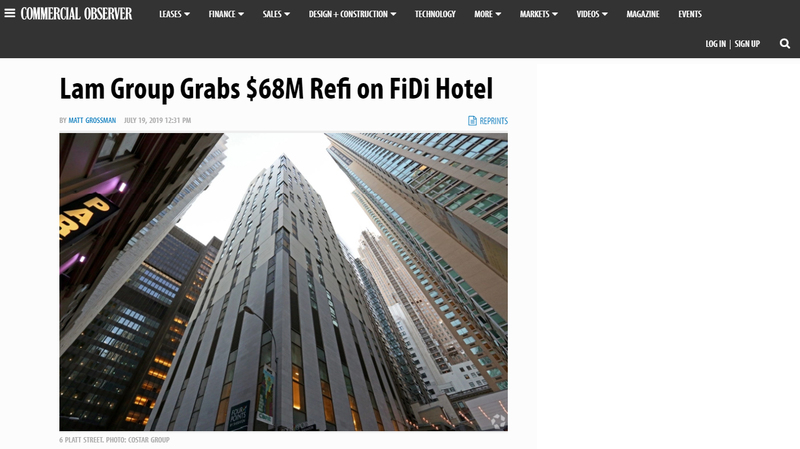 In a deal that closed earlier this week, Lam Group, led by investor John Lam, refinanced the outstanding debt on its Four Points by Sheraton New York Downtown, which opened in February 2016. The new deal includes $1.3 million in fresh debt, as well as a refresh of the $66.2 million of loans that are outstanding on the building. The most recent previous round of financing came from Shanghai Commercial Bank, which lent $70 million on the building in late 2016.

The 261-room property stands at 6 Platt Street between Gold and Pearl Streets, a few blocks away from the New York Stock Exchange. A restaurant, Ketch Brewhouse, operates on the hotel’s top floor adjacent to a rooftop patio, and the site also features a gym and a fitness center for guests.

Real Hospitality Group manages the property on behalf of Lam, which has emphasized the use of funding under the EB-5 visa program to draw Chinese investment to its New York City development projects. Other lodgings it controls in the city include another Sheraton in Brooklyn, an Aloft hotel in Manhattan and a Marriott Residence Inn blocks from the Four Points at the corner of Broadway and Maiden Lane.

The company is also on the verge of opening a Virgin Hotel at 1225 Broadway in NoMad, in a new 28-story building that topped out earlier this year.

Rooms this weekend at the Four Points by Sheraton start at $159 per night, according to rates available on the hotel’s website

Representatives for Lam Group and Investors Bank didn’t immediately respond to an inquiry for this article.

In a 2015 interview with Commercial Observer, Lam, who grew up in mainland China and Hong Kong, described how his real estate business grew out of a successful garment-industry enterprise.

“The garment industry started shrinking and I converted factories to office condos. So then when the market [was] down, I bought a lot of real estate at foreclosure from the bank,” the founder explained.

That year, Lam Group was responsible for seven in 10 newly built hotels in the city, Lam said.