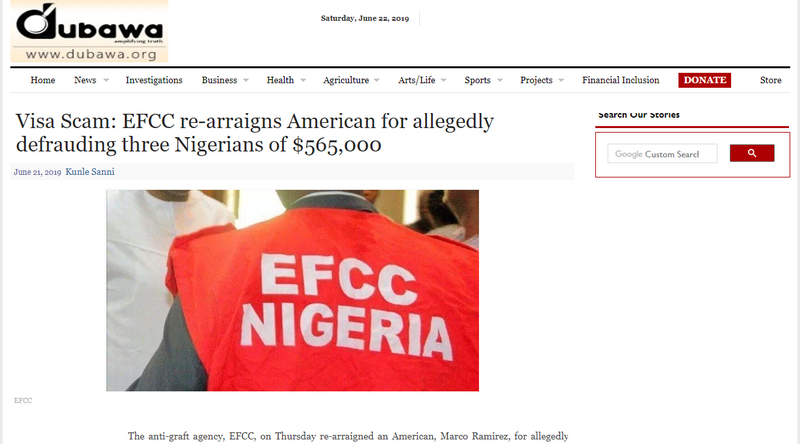 The Economic and Financial Crimes Commission (EFCC) said it charged Mr Ramirez before a judge, Mojisola Dada, on an amended 12-count charge of conspiracy and obtaining under false pretence.

The American and his companies were previously arraigned on June 22, 2017, before another judge, Josephine Oyefeso, on a 16-count charge but was granted bail in the sum of $25,000.

His case file was later transferred while he was subsequently re-arraigned before Judge Dada.

Mr Ramirez is alleged to have defrauded Godson Echejue, Abubakar Umar and Olukayode Sodimu of their money promising them that he would invest this under the Citizenship and Immigration Services Employment-Based Fifth Preference (EB-5).

He was also arraigned in a separate court before Peter Affen of the Federal Capital Territory High Court, sitting in Maitama on April 18, 2016, for defrauding two Nigerians Ejikeme Mgbemena and Frank Egbon of $2.3m after he promised to provide American Green Card for members of their families below 18 years.

According to the agency, his offences contravene Section 1 (3) of the Advance Fee Fraud and Other Fraud Related Offences Act, No. 14 of 2006.

Mr Ramirez’s counsel, Ademola Adefolaju, urged the court to allow his client continue with the bail terms earlier granted to him by Judge Oyefeso.

Mr Dada asked the defendant if he had complied with the bail terms. Mr Adefolaju confirmed that his client had fully complied and had been going to the EFCC’s office as directed by the court.

“Having not breached the bail terms granted by my brother judge, the defendant is hereby allowed to continue with the terms,” the judge ruled.