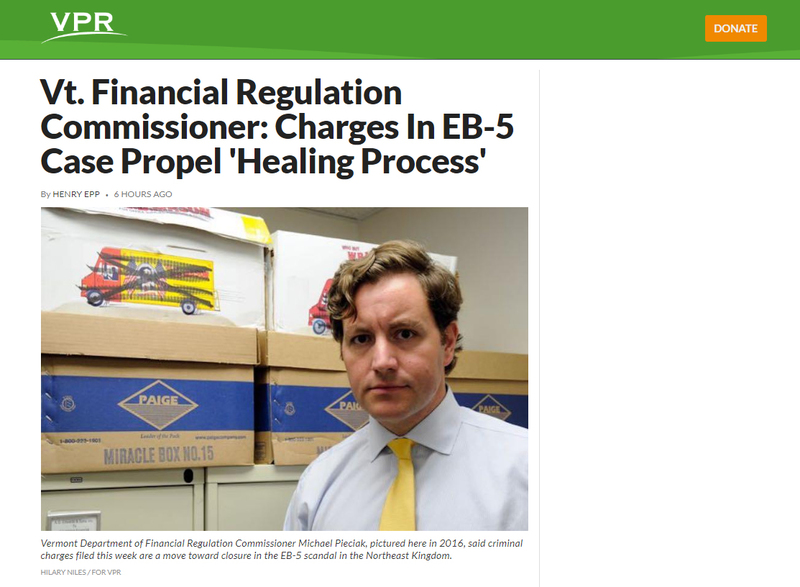 Vermont Department of Financial Regulation Commissioner Michael Pieciak, pictured here in 2016, said criminal charges filed this week are a move toward closure in the EB-5 scandal in the Northeast Kingdom.

Criminal fraud charges filed this week against four defendants over their involvement in an EB-5 investment scheme in the Northeast Kingdom are a step toward closure, according to Vermont Commissioner of Financial Regulation Michael Pieciak.

Pieciak was part of the state investigation that led to the uncovering of the EB-5 scandal in 2016. His office also oversees the Vermont Regional Center, the state-run entity charged with regulating EB-5 projects.

Federal regulators ordered the regional center to shut down last year, but the state appealed that decision. While on appeal, the center is still overseeing EB-5 projects launched before fraud allegations involving Jay Peak surfaced.

"But other than that, other than continuing to monitor the projects from a financial standpoint and from an operational standpoint, there's not a whole lot that the regional center is up to," Pieciak told VPR.

Pieciak said he hopes his department's appeal to an administrative law judge will come down in their favor; if not, "we'll look to the federal court system," he said.

Pieciak's office has argued the Vermont Regional Center should be allowed to wind down its work on existing EB-5 projects, rather than shutting down abruptly.