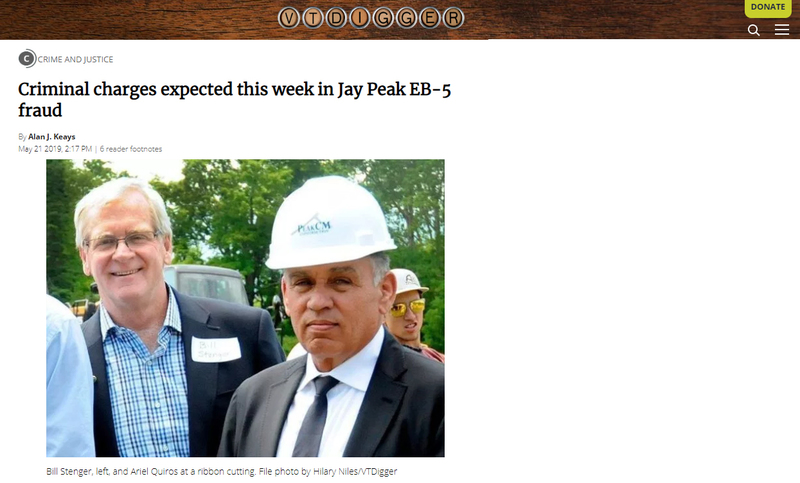 Apress conference is set for Wednesday in Newport, where federal criminal charges are expected to be announced against Jay Peak developers Ariel Quiros and Bill Stenger in connection with the largest fraud case in the history of Vermont.

According to that notice, Nolan “will announce charges related to a major criminal fraud case,” though it doesn’t specify which case.

Nolan was not available Tuesday to comment, according to Kraig LaPorte, a spokesperson for the U.S. Attorney’s Office in Vermont. LaPorte declined comment when asked for further details.

According to a source with knowledge of the federal probe, criminal charges against both Quiros and Stenger are expected to be announced at that press conference Wednesday in Newport. The source did not know the specific charges expected to be filed, and added that other individuals may also be indicted.

Court hearings in the criminal cases are expected to take place earlier Wednesday in federal court in Burlington.

No charges against either Stenger or Quiros were publicly listed Tuesday afternoon in the federal court system’s online filing system for the district of Vermont.

Newport, where the press conference Wednesday is set to take place, is home to two of the projects headed by Quiros and Stenger that never got off the ground.

One of those projects, a proposed biomedical facility, was deemed “nearly a complete fraud” by the Securities and Exchange Commission, while the other left a large hole in the city’s downtown after buildings were razed for an office project that stalled once state and federal authorities put the brakes on the development in April 2016.

In total, according to court records, Stenger and Quiros solicited more than $450 million in monies from more than 800 foreign investors through the federal EB-5 immigrant investor program.

The money was raised for projects in the Northeast Kingdom, including massive upgrades at Jay Peak resort, a new hotel at Burke Mountain ski and the two planned for Newport.

In addition to misappropriating funds through a “Ponzi-like” scheme over an eight-year period, the lawsuits filed more than three years by regulators alleged that Quiros pocketed $50 million for himself, purchasing a luxury New York City condo and paying off his taxes.

When those two separate civil investor fraud lawsuits were announced in April 2016 by the U.S. Securities and Exchange Commission and the state of Vermont, the U.S. Attorney Eric Miller also said that a federal criminal probe was underway.

Since that time, federal authorities, including the current U.S. attorney, Nolan, have declined to either confirm or deny such an investigation was underway.

Attorneys representing Stenger and Quiros declined to comment on the matter Tuesday.