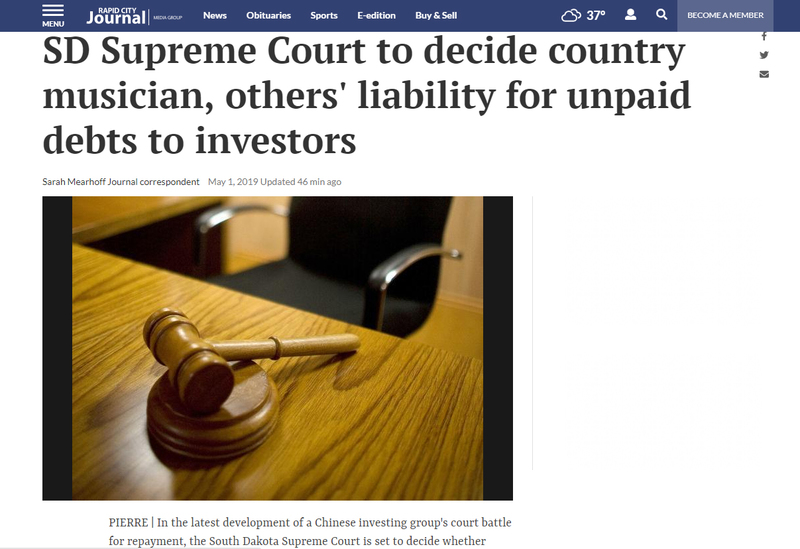 In the latest development of a Chinese investing group's court battle for repayment, the South Dakota Supreme Court is set to decide whether individual loan guarantors — including country musician Kenneth "Big Kenny" Alphin — are personally liable for over $32.5 million in unpaid loans.

SDIF Limited Partnership 2, a group of 65 Chinese investors, invested millions into the construction of the Deadwood Mountain Grand casino-hotel located in western South Dakota as part of a federal EB-5 (employment-based fifth preference visa) program which offers United States citizenship to foreigners who invest more than $500,000 in a U.S.-based project set to create at least 10 jobs.

Of the 65 Deadwood Mountain Grand investors, 64 have received citizenship, according to the Rapid City Journal. But they haven't gotten their money back.

SDIF has since brought forward a lawsuit in South Dakota District's Northern Division federal court to be repaid. U.S. District Judge Charles Kornmann wrote in December that the investors are entitled to a judgement of $32.5 million, plus interest. Rapid City-based attorney Haven Stuck filed a memorandum in September saying that come October, the unpaid balance will be nearly $44 million due to interest.

Now, the South Dakota Supreme Court is involved, too. Kornmann temporarily handed the case to the Supreme Court to decide whether there is state law or case precedent which can answer the question of who is responsible for repaying the debt.

On Tuesday, the Supreme Court heard oral arguments from plaintiffs' and defense attorneys about whether the debt can be collected only from Mountain Grand's corporate ownership Tentexkota, LLC, or from individual members of the LLC which signed onto the loans as guarantors.

SDIF argues that the individuals should be held responsible. The eight LLC members and defendants argue they do not have personal liability.

Stuck said these were guarantees made by "successful businessmen," and their personal liability should be enforceable.

"Clearly, the guarantors all benefited from these loans and they should be held accountable for their actions," Stuck said.

But defense attorney Kasey Olivier argued Tuesday that state statute only provides for personal liability for corporate debt if it is spelled out in the articles of organization, along with written consent.

Olivier said this specific situation isn't defined in state law, but the court "isn't the proper place for us to rewrite the statute": That's up to the Legislature to do.

Olivier said this case has been well-known since before the 2019 legislative session. If the Legislature thought there was an issue with the current law, she said they should have adjusted its statute when it had the chance earlier this year. She pointed to other states like West Virginia that have done this when faced with similar cases.

"The silence speaks volumes," Olivier said. "This court has repeatedly held as closely as a year ago that we have to go by the plain text of the statute. We assume that the Legislature says what it means from the text."

Once the Supreme Court answers Kornmann's three questions, he can use them to make his final ruling on the case.

EB-5 program: It helps to have friends in high places
January 21, 2020
EB5 Processing Time Updates for the I-526 Petition and I-829 Petition
February 11, 2020
Legislation would ease restrictions on EB-5
January 14, 2020
International Students Should Read About These Major EB-5 Visa Advantages
January 21, 2020
Between Two EB-5 Bills, Only One Offers Real Reform
February 04, 2020
Join Professionals on EB5Projects.com →
Securities Disclaimer