Tom Evslin: The state’s failure in EB-5 By Commentary 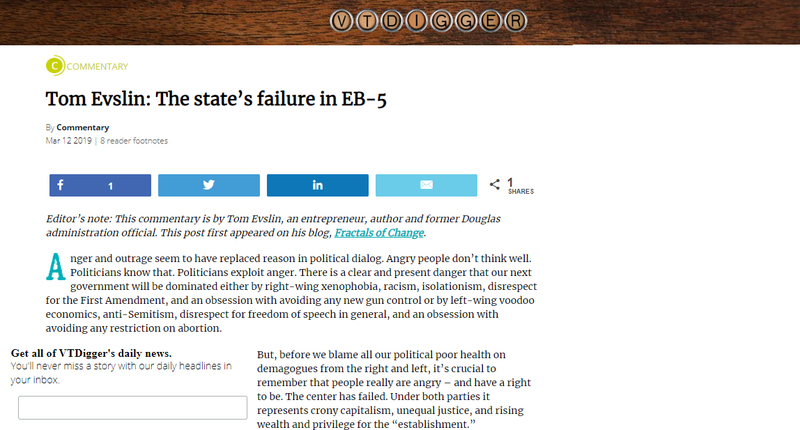 Anger and outrage seem to have replaced reason in political dialog. Angry people don’t think well. Politicians know that. Politicians exploit anger. There is a clear and present danger that our next government will be dominated either by right-wing xenophobia, racism, isolationism, disrespect for the First Amendment, and an obsession with avoiding any new gun control or by left-wing voodoo economics, anti-Semitism, disrespect for freedom of speech in general, and an obsession with avoiding any restriction on abortion.

But, before we blame all our political poor health on demagogues from the right and left, it’s crucial to remember that people really are angry – and have a right to be. The center has failed. Under both parties it represents crony capitalism, unequal justice, and rising wealth and privilege for the “establishment.”

The federal government took away the state’s authority to regulate EB-5 because it was at least incompetent. Was it criminal? Were bribes paid? How did it happen that audits weren’t done? We don’t know because the attorney general says it is its “professional obligation” as a lawyer to defend the state by refusing to release state internal documents related to the scandal. He is the state’s lawyer; is it his obligation to defend the state from accountability or to defend the citizens of the state from wrongdoing? If he is not the citizens’ defender, who is?

One batch of EB-5 documents were just released in a partial settlement of a lawsuit by VTDigger. But this release is just the beginning. Many more records are being withheld than will be released under this settlement. VTDigger founder and editor Anne Galloway is quoted in Seven Days as calling the release “miniscule.” She says it is an “outrage that it takes so much effort to get so little.”

Galloway is not a demagogue of the right or left; but she is outraged. This is just one local example of the establishment protecting its own, of a center which has failed.

There is the relatively light sentence given to Paul Manafort for serious (but white collar) crimes.

There is the carried interest deduction which makes sure that hedge fund managers don’t have to pay as much tax as the rest of us. Somehow neither Republican nor Democratic administrations have managed to repeal it, even though both Obama and Trump promised to do so.

There was the great bank bailout that gave rise to the Tea Party and continuing favors to Wall Street which helped give justification to the “Occupy” movement.

There is the continual corruption of government by grants and tax breaks. Certainly not all grants are corrupt but you can’t expect good government if politicians have the discretion to direct huge sums of our money to potential donors.

The center cannot be a safe refuge for establishment self-interest or the center will cease to exist. We MUST address the just causes of anger or that anger will continue to be the fuel for successful demagoguery which will destroy the country.