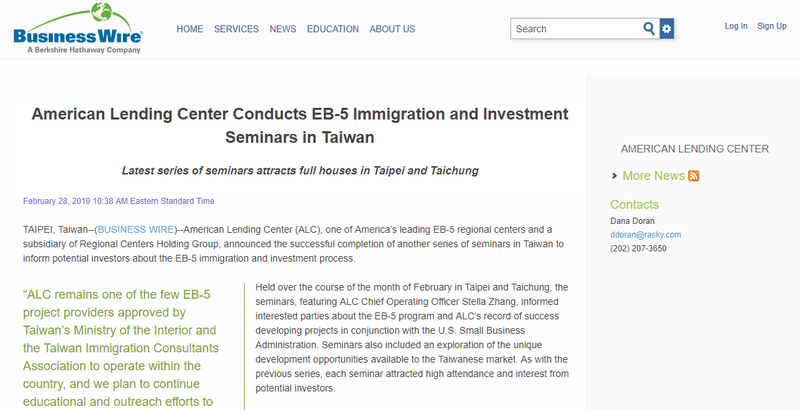 American Lending Center (ALC), one of America’s leading EB-5 regional centers and a subsidiary of Regional Centers Holding Group, announced the successful completion of another series of seminars in Taiwan to inform potential investors about the EB-5 immigration and investment process.

“ALC remains one of the few EB-5 project providers approved by Taiwan’s Ministry of the Interior and the Taiwan Immigration Consultants Association to operate within the country, and we plan to continue educational and outreach efforts to connect with investors across Taiwan.”

Held over the course of the month of February in Taipei and Taichung, the seminars, featuring ALC Chief Operating Officer Stella Zhang, informed interested parties about the EB-5 program and ALC’s record of success developing projects in conjunction with the U.S. Small Business Administration. Seminars also included an exploration of the unique development opportunities available to the Taiwanese market. As with the previous series, each seminar attracted high attendance and interest from potential investors.

“Our Taiwan-based team is thrilled by the continued interest in ALC’s unique business model, which has resulted in the completion of over 70 projects exclusively in the senior loan structure, among potential investors across the country,” remarked Zhang. “ALC remains one of the few EB-5 project providers approved by Taiwan’s Ministry of the Interior and the Taiwan Immigration Consultants Association to operate within the country, and we plan to continue educational and outreach efforts to connect with investors across Taiwan.”

ALC previously completed a seminar series in November 2018 following the announcement of the opening of its new office in Taipei last April, and is now engaged in partnerships with several top immigration consulting firms. The regional center has pursued an active expansion into emerging EB-5 markets in Asia, opening offices in Vietnam and India in the last year in addition to the office in Taipei.