The state’s environmental enforcement agency has imposed pollution control measures on development at the resort since 2006, but several streams have not fully recovered in the past decade, in part due to a wave of expansion since 2009.

According to the environmental group, the state was not enforcing its own water quality standards.

“We were dissatisfied with the way Department of Environmental Conservation (a division within the Agency of Natural Resources) was carrying out that obligation, which is why we appealed the permits,” said Kim Greenwood, director of Water Quality Programs for the VNRC.

The February settlement agreement places restrictions on new development in the watershed of three streams on the resort property – unless Jay Peak can show that those waterways are recovering.

To prove the streams are recovering, Jay Peak must meet interim targets for reducing the amount of sediment entering those streams. The targets, which are in effect for the first two years of the settlement, are meant to incrementally bring the streams back into compliance with the state’s water quality standards.

After the first two years, Jay Peak must meet the state’s water quality standards, or construction projects in the watershed can be halted for up to a year.

Water-quality monitoring reports reveal that the interim targets are not being met.

A memo from the state’s Water Quality Division summarizing the water-quality monitoring reports says two of four monitoring sites on the polluted streams “did not meet the interim biocriteria targets” and another “has slipped back into non-compliance.”

The settlement is a binding agreement, and if Jay Peak doesn’t meet the standards, the VNRC could seek to have the resort held in contempt by an environmental court judge.

“If it appears that things aren’t being followed that’s one of the legal options,” said Brian Shupe, executive director of VNRC, “but we’re not there yet.”

A spokesman for Jay Peak did not respond to multiple requests for comment Wednesday. Officials with the Department of Environmental Conservation say the resort is implementing a water-quality remediation plan as required by the settlement. The state said it is optimistic that the interim targets will be met going forward. 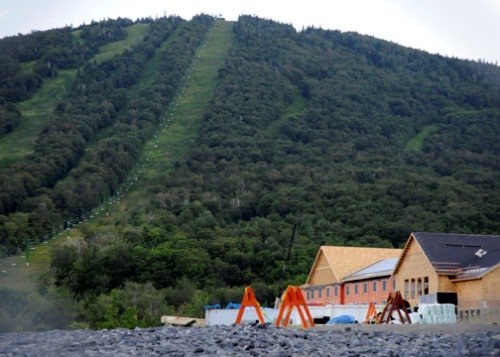 Complicating matters, however, is that the settlement and Jay Peak’s stormwater discharge permits allow it to continue with new construction projects – despite missing targets – as long as pollution is offset with control measures elsewhere along the streams. That means if the resort builds a project that sends sediment into a stream at one location, it can capture sediment at another as long as the net result doesn’t increase pollution.

Specifically exempt from the settlement and pollution offset requirements are 13 new cottages (totaling 84 residential units), a 15,000-square-foot recreation center and a 5,000-square-foot medical center. Those projects are being funded through the federal EB-5 immigrant investor program.

The settlement also says the resort must wait until the streams are restored to state standards before it applies for permits to develop the so-called West Bowl. Jay Peak plans to build six new trails, three chairlifts, glades, a base lodge and a hotel on that land, resort officials have said.

Other “construction-phase and operational-phase” developments in the watershed of the three streams must be offset by pollution easement measures, according to the settlement.The state is not aware of any projects that will rely on pollution offsets, and there are no applications pending at this time, according to Neil Kamman, with the DEC’s Watershed Division.

However, in an August 5 letter, an attorney representing the VNRC asked Jay Peak about developments in 2016 that involved building new pollution control measures, and requested specific details on how those will work — another requirement of the settlement.

In an August 11 response, Jay Peak officials said their plan is to move ahead with their anticipated sedimentation control measures, whether they’re counted as such for purposes of the agreement or not.

The three parties plan to meet in early September to “view projects in the field, look ahead to other 2015 and 2016 projects, and review the (pollution) offset calculation models,” according to Jay Peak’s letter. DEC officials confirmed that meeting is being planned, and that it will be open to the public.

Greenwood, with the VNRC, said it’s an opportunity for everyone to get on the same page.

It’s unclear if a framework that relies on the creation of new pollution offsets to prevent further damage to streams will allow other cleanup efforts to be effective, she said.

“I think that’s the million dollar question, and one that’s being considered across the state. How much development can these waterways support?” Greenwood said. “That balance is quite delicate.”

Jay Peak is not the only ski resort that has damaged high-elevation streams in Vermont. Sugarbush, Killington, Mount Snow and Stowe are all responsible for damaging waterways, according to the state. Some resorts, like Stratton and Sugarbush, have successfully restored streams.

In those instances though, Greenwood said development was mostly curtailed, and restoration didn’t rely heavily on added pollution control measures.