Foreigners Funded Houston Development to Get Green Cards. They Were Duped, SEC Says 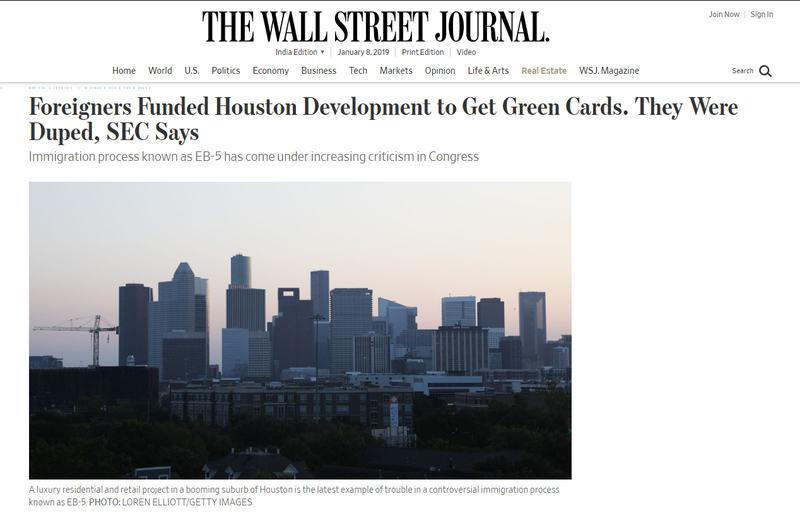 A luxury residential and retail project in a booming suburb of Houston is the latest example of trouble in a controversial immigration process known as EB-5.

Scores of foreign investors in pursuit of U.S. green cards poured nearly $50 million into what they thought was going to be a giant senior housing, luxury residential and retail project in a booming suburb of Houston.

Instead, the developers “improperly transferred” $20.5 million into other real-estate investments, according the Securities and Exchange Commission. None of the investors have obtained visas.

The developers last month settled charges with the SEC and agreed to pay $51.4 million in a penalty and reimbursements to investors. These firms didn’t admit or deny the findings of the civil action, according to the order.

The settlement marks the latest example of trouble in a controversial immigration process known as EB-5. This program has granted more than 100,000 visas to foreigners who have invested at least $500,000 each in real-estate developments or other job-creating businesses in the U.S.

Lately, EB-5 has come under increasing criticism in Congress for improper uses of funds, defrauded investors and projects that don’t accomplish the economic development goals of the program.

The project in Pearland, Texas, also had an unusual twist: Both the developers and Crown Point Regional Center, the firm that marketed the green cards abroad, are owned by the same listed Hong Kong company, Modern Land (China) Co. Ltd., according to documents reviewed by The Wall Street Journal.

This kind of cross-ownership has sparked criticism in the past. Sen. Chuck Grassley (R., Iowa) raised concerns about it in a 2016 letter to the Homeland Security Department, noting that it allows foreign corporations to market U.S. green cards and sell homes in EB-5 developed projects to the same investors.

These projects “have a snake-eating-its-own-tail quality about them that Congress absolutely did not intend,” the letter states.

Representatives of the developers, Crown Point and Modern Land, didn’t respond to requests for comment. A spokeswoman for the U.S. Citizenship and Immigration Services, an arm of the Department of Homeland Security that runs the EB-5 program, declined to comment on the SEC action.

Modern Land’s primary business is developing property in mainland China, according to its regulatory filings in Hong Kong. It reported 22.8 billion yuan ($3.3 billion) in sales in the first nine months of 2018. Modern Land also owns the Seattle Metro Regional Center, which in 2013 was designated by U.S. Citizen and Immigration Services as qualified to raise EB-5 funds.

Chinese investors have been the largest foreign participant in the EB-5 program. But their interest has been waning because applicants may have to wait up to 14 years for a visa.

Experts predict Congress will continue passing short-term extensions. “With so many issues facing Congress, many in the industry believe that the program once again will get extended, without change or reform,” said Mark Edelstein, chair of the real-estate group at law firm Morrison & Foerster.

Between 2015 and 2017, Crown Point raised $49.5 million of capital from 90 immigrant investors for the Houston projects, according to the SEC order. Modern Land’s ownership of Crown Point—which is disclosed on Crown Point’s website—is an arrangement that was approved by U.S. Citizenship and Immigration Services.

But the three developers instead transferred $20.5 million to fund two unrelated real-estate projects, according to the SEC. The developers “should have known those transactions would operate as a fraud or deceit on investors,” the SEC complaint says.

The order said the three developers were all limited liability companies owned by a “foreign real-estate company” without naming it. Other documents identify that foreign company as Modern Land. For example, Lei Zhang, Modern Land’s chairman, is listed on filings with the Texas Secretary of State as the registered agent that formed all three of the limited liability companies.

The SEC order said that the foreign real-estate company that owns the Houston developers “eventually replaced” the $20.5 million that had been improperly transferred.

The projects are part of a larger 48-acre master-planned development in Pearland known as the Ivy District. Work on the roadways, utilities and other infrastructure started about one year ago, according to Matt Buchanan, president of the Pearland Economic Development Corp. None of the buildings planned by the developers named in the SEC action have started to rise, he said in an email.