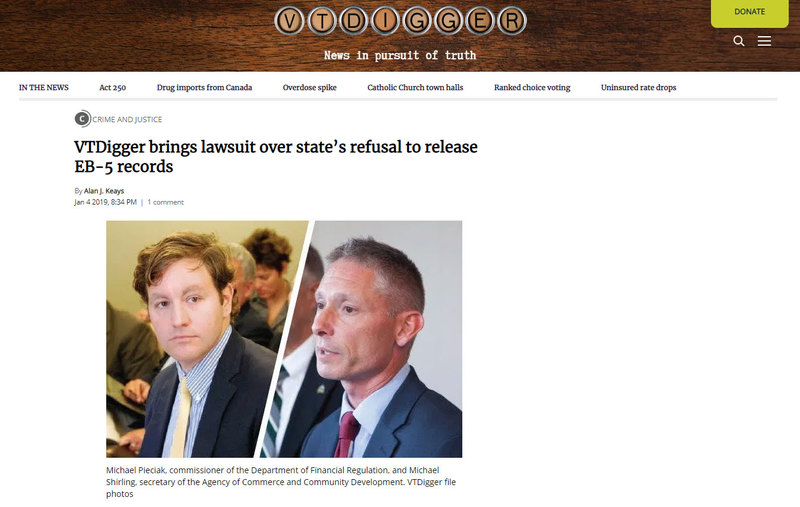 Michael Pieciak, commissioner of the Department of Financial Regulation, and Michael Shirling, secretary of the Agency of Commerce and Community Development.

VTDigger is taking the state of Vermont to court, seeking state EB-5 reports filed with the federal government that officials have repeatedly refused to provide to the news organization.

In a lawsuit filed Friday in Washington County Superior Court in Montpelier, VTDigger is calling on Judge Mary Miles Teachout to order the state to release those documents.

The records are expected to reveal information the state provided to federal authorities when former Jay Peak owner Ariel Quiros and Bill Stenger, the resort’s past CEO, were accused by regulators of misusing $200 million in EB-5 funding.

VTDigger has continually been denied the documents in a series of requests submitted to state agencies over the past several years.

The state has contended that the documents being sought are “relevant” to ongoing litigation involving the state related to the EB-5 scandal, and are, therefore, exempt from the Vermont Public Records Act.

“We are pursuing this case because we believe the State should not be able to suppress documents that rightly belong to the public on the grounds of lawsuits the public has no involvement in,” Cornell and Kenney said in an emailed statement.

Defendants in the suit are the Vermont Agency of Commerce and Community Development and the Vermont Department of Financial Regulation. Michael Shirling, secretary of ACCD, and Michael Pieciak, DFR commissioner, are also named as defendants.

Pieciak and Shirling provided a joint response to the lawsuit when contacted Friday.

“We are as eager as anyone to have these documents made public as soon as the relevant legal proceedings are fully resolved,” they wrote.

The Attorney General’s Office, which has advised the departments not to release the 924s or any other documents related to the Jay Peak fraud, did not respond to an email seeking comment Friday afternoon.

The governor’s office in a recent break with the attorney general has advocated for the records to be released, but for now is continuing to follow the advice of those lawyers.

The lawsuit cites an email from Jaye Pershing Johnson, the general counsel for the governor, arguing that the 924s should be released. The email was obtained by VTDigger in a public request, and involves an exchange Johnson had with attorneys from the involved agencies and the Vermont attorney general’s office.

Johnson cites a central contradiction in the refusing the release the documents.

The agency attorneys trying to blame Quiros and Stenger for any misrepresentation and asserting that the state had no legal obligation to vet the information coming from the developers. However, the state lawyers also argue if the documents are released and the records show state officials failed in their duty, the state would face liability as a result of the damage to defrauded investors.

The lawsuit traces work the news organization has done over the years in uncovering and unraveling the roles of many of the players in the largest alleged fraud case in the history of the EB-5 program.

“Despite these numerous investigations and press coverage, the public at large remains in the dark about how the State has handled this scandal, even though it implicates the actions of several Vermont Agencies and current and former Vermont politicians and officials,” the lawsuit states.

“With the facts hidden from view,” the lawsuit adds, “the public is unable to examine the issues in a meaningful way and hold its officials accountable for any roles they may have had in the fraud.”

The records the news organization is seeking were submitted from 2008 to 2016 by the state-run Vermont EB-5 Regional Center to the U.S. Citizenship and Immigration Services. The forms include the annual reports from the regional center, known as I-924s, and forms for specific EB-5 financed projects, called I-924As.

Quiros and Stenger had been raising money through the immigrant investment program to finance massive upgrades at the northern Vermont ski resort as well as other projects in the state’s Northeast Kingdom.

One of those projects, AnC Bio Vermont, a proposed $110 million biomedical research facility planned for Newport, had been deemed by regulators “nearly a complete fraud.”

Lawsuits brought by state and federal regulators in April 2016 against Quiros and Stenger alleged they operated a “Ponzi-like scheme” with money raised through the EB-5 visa program from foreign investors.

More than 800 investors put up $500,000 each into the project, with many still out money and more than half unable to obtain the green cards and the U.S. residency that were promised through the EB-5 program.

The news organization, in the lawsuit, takes issue with the state’s “relevant to litigation” claim regarding the documents it is seeking.

“By broadly construing the word ‘relevant’ under the litigation exemption, the State threatens to cut off valuable information to all Vermonters,” the lawsuit states.

“As such,” the filing adds, “a narrow interpretation of this exemption is warranted and is in keeping with the Vermont Supreme Court’s repeated admonitions to narrowly construe the exemptions lest they swallow the disclosure principle.”

In denying access to the records, the state cites its own ongoing litigation involving the developers, as well as another lawsuit brought by a group of investors against the state.

Those investors, led by Anthony Sutton of Great Britain, sued several state agencies and several current and past state employees and officials claiming they were complicit in the alleged fraud carried out by the two developers.

The state has recently settled its civil case brought by DFR against Quiros and Stenger, with Quiros agreeing to turn over to the state an estimated $2 million in property in Vermont, and Stenger paying $100,000 to the state.

The Vermont Attorney General’s office argued that state agencies, officials and employees had acted in “good faith.” Stowe attorney Russell Barr, representing Sutton and other investors in the case, has since appealed the case to the Vermont Supreme Court, where it remains pending.

“VTDigger is not a party to these underlying suits invoked by the State in its records denial and should not be subject to that exemption,” says the lawsuit filed Friday. “Release of this information is clearly in the public interest, and disclosure would not prejudice the lawsuits.”

The filing adds, “In the meantime, though, these lawsuits may drag on for years of procedural wrangling without discovery, so that the State’s invocation of the litigation exemption effectively immunizes the State Agencies from accountability to Vermont’s voters and the general public.”

The status of the state-run EB-5 Regional Center remains in doubt.

In July, USCIS issued a notice terminating the center, unleashing a scathing review of the state’s management of the facility.

USCIS criticized the state for its lack of oversight and misrepresentations regarding the series of projects headed by Quiros and Stenger.

The state is appealing that USCIS decision, seeking to “wind down” the center’s operation so it can continue to process the paperwork needed for investors who have already put money into EB-5-funded projects rather than immediately shuttering the facility.