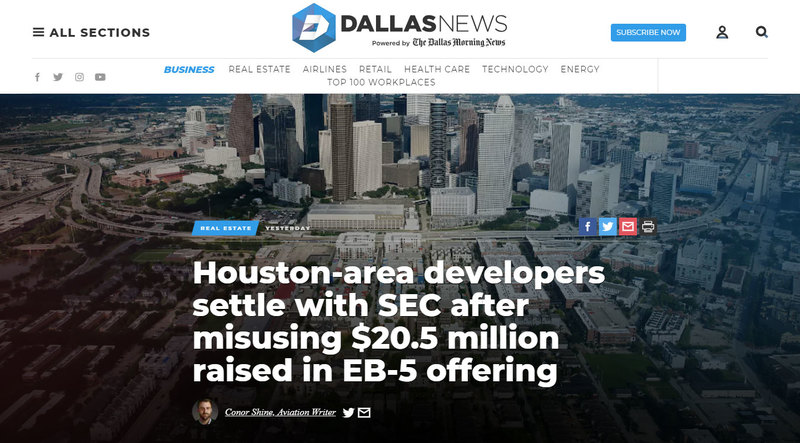 The Securities and Exchange Commission announced a settlement Wednesday with a group of Houston-area developers accused of misusing $20.5 million in funds raised from Chinese investors through the EB-5 program.

The companies said the funds were being used for a mixed-use project near Houston that was to include a senior independent and assisted living facility, townhomes, apartments and condominiums with ground-level retail.

But during 2015 and 2016, $20.5 million was diverted to unrelated real estate projects without investors’ knowledge, according to an investigation by the SEC's Fort Worth regional office. The SEC also found that the companies improperly described the titles and roles of two real estate experts involved in the project.

The developers "should have known the transfer and misuse of investor funds, which were never disclosed, fell outside of the stated use of proceeds detailed in the offering materials,” said an SEC cease-and-desist order released Wednesday.

As part of the settlement, the companies agreed to pay an $800,000 fine. The $49.5 million raised was also returned to investors, along with $1.1 million in interest.

"These developers obtained almost $50 million from investors in connection with an EB-5 offering that was based on misleading statements and involved a misuse of the funds raised," said Shamoil T. Shipchandler, director of the SEC's Fort Worth regional office, in a statement. "Today's resolution provides full relief to all of the affected investors."