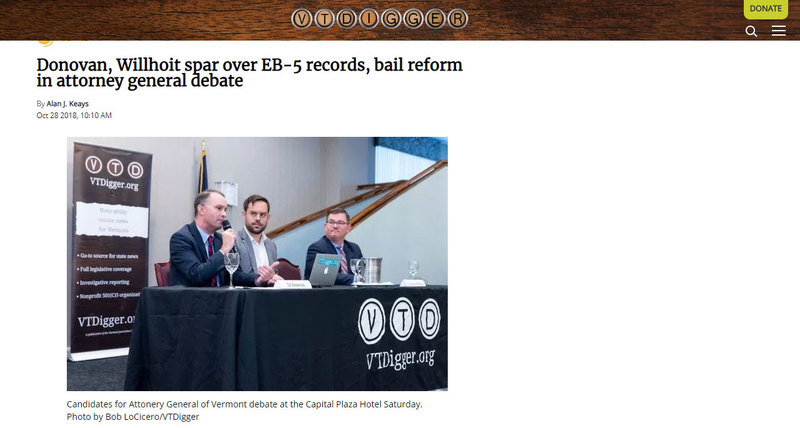 Candidates for Attonery General of Vermont debate at the Capital Plaza Hotel Saturday.

A debate between the two major party candidates for attorney general Saturday featured the challenger professing his love for the incumbent.

However, that didn’t stop Republican Janssen Willhoit, a first-time statewide candidate, from telling his opponent, incumbent Attorney General TJ Donovan, that he should change his stance and release more information about the EB-5 scandal that played out in northern Vermont.

“I love TJ Donovan,” Willhoit said, referring to the sitting attorney general as a brother. “I thoroughly enjoyed working on issues with him over the years.”

However, “in that same love,” the St. Johnsbury two-term Republican House member said, he disagreed with Donovan over his blocking the release of state documents related to the fraud. He said Vermonters should be allowed to know who in government knew what and when.

Donovan countered that he had little choice in the matter due to the state facing a lawsuit from angry investors who allege the state’s lax oversight, and possibly even criminal conduct, allowed developers to carry out the fraud in Vermont’s Northeast Kingdom.

Releasing those roughly 2.5 million pages of documents could put the state at risk of a potential large payout while civil litigation on the matter remains pending. As attorney general, Donovan said, he has a duty to protect the state’s and its taxpayers’ interests.

“I know this is particularly unpopular,” he said, “but that’s the job and you can’t walk away from your job.”

While Donovan, a South Burlington Democrat seeking a second two-year term, and Willhoit differed over EB-5 records, the two were in agreement on most other issues raised during the debate at the Capitol Plaza Hotel in Montpelier. 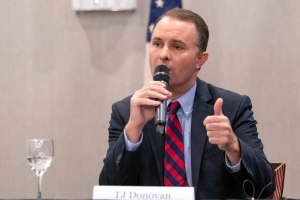 Attorney General TJ Donovan responds to a question during a debate against his Republican opponent, Janssen Willhoit, at the Capital Plaza Hotel.

A VPR-Vermont PBS poll released earlier this week shows Donovan with a 39-point lead over Willhoit.

That wide margin hasn’t stopped both candidates from engaging each other over the issues. Saturday’s debate was the third time the candidates have faced off.

The debates have been civil affairs, but Willhoit hasn’t been shy about going after the incumbent over the need for greater transparency, particularly when it comes to EB-5 records.

“The people in my neck of woods are really upset,” Willhoit said Saturday of the EB-5 scandal that involved a series of developments in northern Vermont, including massive upgrades at Jay Peak. “They want to know what happened. Who did this? Why did they do this?”

Both developers have since resolved their civil cases, though a federal criminal probe remains ongoing.

Media requests, including several by VTDigger, seeking state documents related to the scandal have been met with resistance, with the attorney general’s office arguing against their release, citing an exception to the state’s public records act for pending litigation.

“I think sunshine cures. I really do,” Willhoit said. “I believe that by having public exposure to what really happened that we can not only better protect Vermont from wrongdoing, but we can be better stewards of our responsibility as government officials.”

Donovan said that he has made the documents available to State Auditor Douglas Hoffer, who is conducting an “independent third-party review” of the state’s role in the scandal.

“He’s getting everything,” Donovan said of Hoffer.

“He’s going to conduct an independent review and produce a report about who did what in state government,” Donovan said. “At the same time, I’m going to fulfill my legal obligation and professional responsibility, my ethical obligation, to represent my clients.”

There was little distance on the positions of the two candidates on reducing the state’s inmate population to avoid sending prisoners to facilities outside of Vermont, upholding net neutrality standards, and the need to provide legal protections to undocumented immigrants in state.

Willhoit even said he supported Donovan’s proposal to enshrine Roe v. Wade abortion rights into Vermont law, though he said he is personally “pro-life.” Both Willhoit and Donovan also supported a move to a tax and regulated market for marijuana in the state, though Willhoit was more of an early adopter of the position than Donovan. 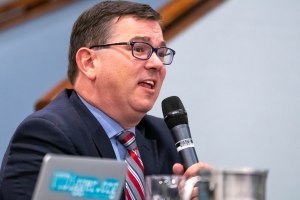 Earlier this year, Gov. Phil Scott signed into law a measure passed by the Legislature allowing for the legal possession and recreational use of marijuana in the state. However, selling marijuana remains illegal.

On the matter of bail reform, a $200 difference separated the two candidates.

Willhoit said that while that may seem like a small amount, for people living in poverty and facing criminal charges it can make the difference between freedom and incarceration — and ultimately how much of an impact an incident has on the rest of someone’s life.

The Republican candidate said he was among those strongly backing legislation last session that would eliminate cash ball for nonviolent drug offenses. However, Donovan eventually recommended setting a cap at $200, which is what passed and became law.

Willhoit said he is aware of cases where people charged with such crimes have been jailed on $200 bail since the legislation went into effect July 1.

“I really wish the attorney general would have stood by me to get that bill through,” Willhoit said, adding, “I believe in my four years that would have been the greatest thing that I did.”

Donovan called the bail reform legislation a “good first step” that can be looked at again if it is not achieving the intended results.

“I think why we asked for the $200 was because the Constitution talks about offenses being bailable,” he said, adding that some cash bail was needed for the law to stand up to legal challenges.

“It was an arbitrary number,” Donovan of the $200 figure. “I couldn’t tell you where $200 came from other than we felt that was a fair compromise.”

Willhoit, who served five years in Kentucky prison for bilking clients out of tens of thousands of dollars when he worked as a broker, said during the debate he wouldn’t step aside from the race for failing to pay back his victims, as suggested in a recent tweet from one his party’s leaders.

Brady Toensing, an attorney vice chair of the Vermont Republican Party, called on Willhoit to drop out as the party’s nominee for the attorney general’s post unless he “commits in writing” to pay back his victims.

“I’m not going to step away from the race,” Willhoit said. “In Kentucky, when one is convicted for the crime I was convicted, if someone completes their entire sentence, there isn’t restitution.”

Speaking about his past during the debate, Willhoit became emotional and looked to be holding back tears.

He talked of work he has done in turning his life around, receiving a pardon from the governor of Kentucky, moving to Vermont and becoming a defense lawyer representing indigent clients, pushing for criminal justice reforms, and serving in the Statehouse.

“I do truly believe I paid my debt,” Willhoit said, “and the governor of Kentucky believed so enough that he even pardoned me.”

Donovan said that he didn’t want to see his opponent withdraw from the race, adding that he “has every right” to run for the post of the state’s top prosecutor.

“He’s an attorney in good standing in our state. He is a member of our state Legislature, he’s a wonderful family man, I met his family earlier today, “ Donovan said of his challenger. “I”m proud to call him my friend, and I’m glad you’re in this race, Janssen.”