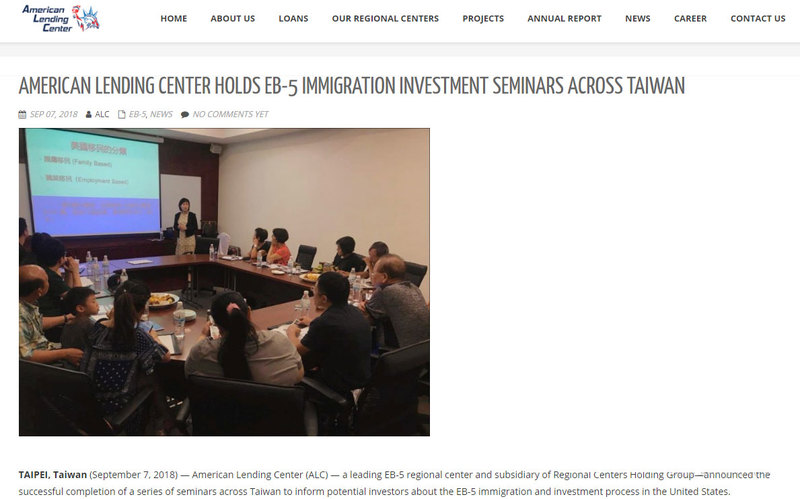 American Lending Center (ALC) — a leading EB-5 regional center and subsidiary of Regional Centers Holding Group—announced the successful completion of a series of seminars across Taiwan to inform potential investors about the EB-5 immigration and investment process in the United States.

Held Sept. 1-7 in the cities of Taipei, Hsinchu, Taichung, Tainan and Kaohsiung, the seminars informed interested parties about ALC’s usage of the EB-5 program and its record of success in developing projects in conjunction with the U.S. Small Business Administration. The seminars, which saw high attendance throughout the week, further explored development and opportunities unique to the Taiwanese market and built upon previous seminars held throughout the year featuring recently approved EB-5 investors’ immigration success stories. “As one of only a handful of EB-5 project providers approved by the Taiwanese government to operate within the country, ALC is excited to share its unique business model with potential investors and gratified by the high levels of interest shown in each city,” said ALC Chief Operating Officer Stella Zhang. “Our newly established Taiwan-based team has been critical to the success of our ongoing educational and outreach efforts.”

ALC announced the opening of its new office in Taipei in April. The expansion into Taiwan is a key part of the company’s broader exploration of emerging EB-5 markets in Asia, which also includes the recent July opening of a new office in Ho Chi Minh City, Vietnam, and the scheduled opening of an additional office in India later this year.