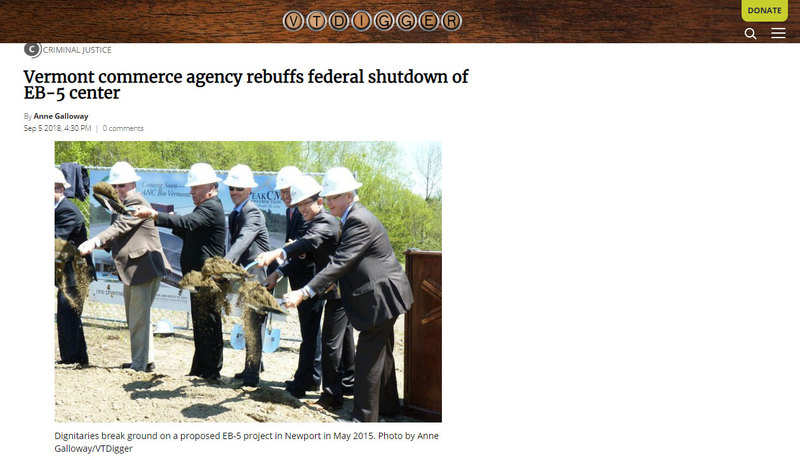 Dignitaries break ground on a proposed EB-5 project in Newport in May 2015.

The state is appealing a federal decision to terminate the Vermont EB-5 Center.

The administrative appeal, filed Wednesday by an outside law firm, alleges that the U.S. Citizenship and Immigration Services termination decision “is not based in federal law or USCIS guidance documents.”

Gov. Phil Scott and his administration have pushed for a “wind-down” of the center and, as promised, appealed the decision in order to protect Von Trapp Brewery, which is the last EB-5 project operating under the aegis of the state-run program. The brewery has sought to raise $22 million in immigrant investor funds.

Lawyers from Baker Donelson representing the Vermont commerce agency allege that the USCIS decision to shut down the state-run EB-5 center was “inappropriately supported by press articles rather than more reliable evidence.”

USCIS in July determined that state officials misled federal officials and investors when they signed off on documents attesting that a biomedical company had FDA approvals for artificial organs — E-Liver, C-Pack and TLPS to replace liver, kidney and heart and lung functions — that were to be manufactured in a Newport plant paid for with immigrant investor funds.

Baker Donelson argues that the Vermont EB-5 Regional Center has “consistently made comprehensive and accurate representations” in its filings and “helped to stop the fraud when it was discovered.”

The state-run EB-5 program was responsible for management and oversight of a $400 million development of AnC Bio Vermont, Jay Peak Resort and Burke Mountain, which the Securities and Exchange Commission determined in April 2016 were part of a massive Ponzi-like fraud scheme.

More than 800 investors put up $500,000 each in the developments in exchange for green cards.

The federal immigration agency says the state did not adequately monitor the projects, that the fraud stymied economic development, and that regulations do not allow for a wind-down scenario for the center, as the state has proposed.

In its appeal of the decision, the state’s lawyers say that abruptly terminating the center is “arbitrary and capricious, and outside of legislative authorization.”

Further, the state says the shutdown would further hinder economic growth and inflict harm on innocent investors. Investors in Von Trapp Brewery, and more than 400 in Jay Peak Resort projects, have not yet been able to obtain green cards because of the fraud.

Under federal policy, the shutdown of a regional center automatically results in the denial or revocation of green card petitions for investors.

Upon announcing its decision to close the center, the USCIS said the fallout from the decision was the state’s problem to deal with, as it had failed to ensure proper oversight in the first place.

Baker Donelson says it is “arbitrary” of the federal government to destroy “the immigration process for innocent investors and projects.”

Termination of the center could make legal residency for these investors a distant hope.

The state says EB-5 projects have resulted in an investment of more than $500 million in foreign capital in Vermont and the creation of 3,700 jobs. Lawyers tout economic growth at Von Trapp’s and Mount Snow, which has formed its own EB-5 regional center in the wake of the fraud.

In addition, Baker Donelson writes that USCIS did not impose specific obligations on regional centers “to administer, oversee or manage” EB-5 projects.

In the next breath, the lawyers say the Vermont EB-5 Regional Center “engaged in a robust program of both investor and project-specific oversight.”