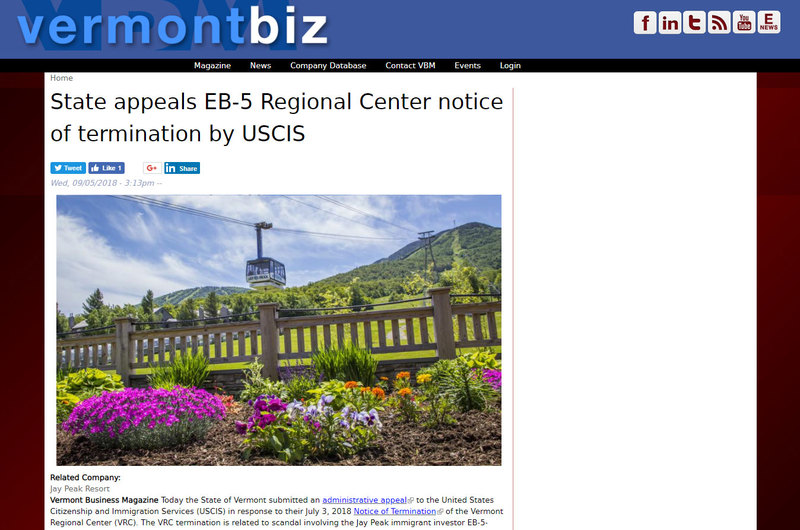 Vermont Business Magazine Today the State of Vermont submitted an administrative appeal (link is external) to the United States Citizenship and Immigration Services (USCIS) in response to their July 3, 2018 Notice of Termination of the Vermont Regional Center (VRC). The VRC termination is related to scandal involving the Jay Peak immigrant investor EB-5-funded projects. The administrative appeal continues to advocate for an orderly wind-down of the VRC to best preserve the economic benefits while also protecting those immigrant investors whose immigration status remains unresolved.

The state maintains that termination is contrary to USCIS' own goals of economic development and investor resolution, saying both would be harmed by a summary termination. The state cites projects at Trapp Family Lodge and Mount Snow that are completely unrelated to the scandal that could be undermined by the termination.

The state said in part in its filing: "The success of the Mount Snow and Trapp Family Lodge projects is strong evidence that significant economic growth and job creation was achieved and is continuing as a result of the EB-5 program, and that VRC oversight was effective."

The fraud is related to about $200 million in investor money that was diverted in what the US Securities & Exchange Commission called a "Ponzi-like" scheme when charges against resort principals Ariel Quiros and Bill Stenger were revealed in April 2016. The state and federal charges have since been settled against the two, with Quiros, as owner, paying millions in order to make investors whole and complete the projects if possible.

The VRC said in a press release that it will continue to communicate and engage with projects related to the VRC and with other stakeholders to apprise them of the status of the appeal.

"The VRC now files this brief in support of its appeal. The bases for VRC termination cited in the Notice are not grounded in federal law or USCIS guidance documents and are inappropriately supported by press articles rather than more reliable evidence. Furthermore, the VRC has engaged in adequate supervision of both investor activities and the progress of associated EB-5 projects, has consistently made comprehensive and accurate representations in its annual filings and in response to direct USCIS inquiries, has consistently represented the data it had accurately to USCIS in annual filings and in response to inquiries, and took action and helped to stop the fraud when it was discovered. Terminating the VRC abruptly would, far from promoting economic growth, predictably and substantially hinder such growth. The Notice also ignores the significant and permanent harm that USCIS termination of the VRC would inflict on innocent investors. The VRC continues to serve the purpose of promoting economic growth consistent with USCIS regional center program requirements. Thus, VRC requests that USCIS vacate the termination and work with VRC to appropriately wind-down the regional center."

Questions relating to the decision should be directed to Stephanie Brackin at the Department of Financial Regulation.