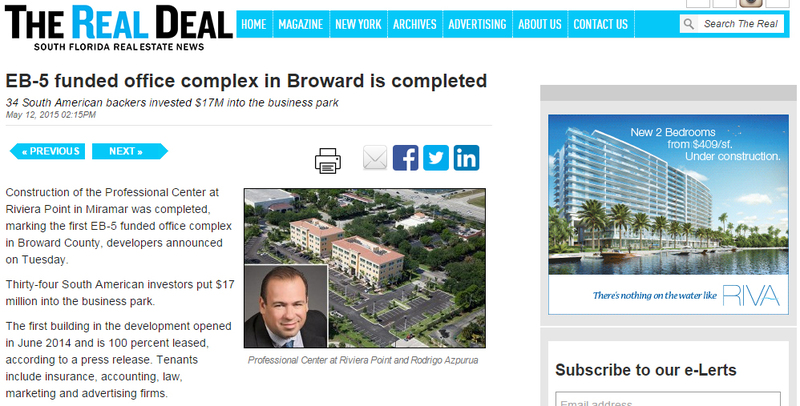 Construction of the Professional Center at Riviera Point in Miramar was completed, marking the first EB-5 funded office complex in Broward County, developers announced on Tuesday.

The first building in the development opened in June 2014 and is 100 percent leased, according to a press release. Tenants include insurance, accounting, law, marketing and advertising firms.

Riviera Point is also behind another EB-5-funded office complex — a 41,000-square-foot Riviera Point Business Center at Doral — for $9.5 million. The office condos are expected to be completed by November.

The qualifying investment for Riviera Point’s Miramar and Doral office centers, each located within a government-designated Targeted Employment Area (TEA), is $500,000.

Since Congress enacted the program in 1990, EB-5 visas have been a path to permanent U.S. residency for foreign nationals who create at least 10 domestic jobs and invest at least $500,000 to $1 million in a U.S. business venture. Nearly half of the regional centers in the Sunshine State are based in South Florida’s tri-county region. Miami-Dade has 17, Palm Beach has 13 and Broward has four.