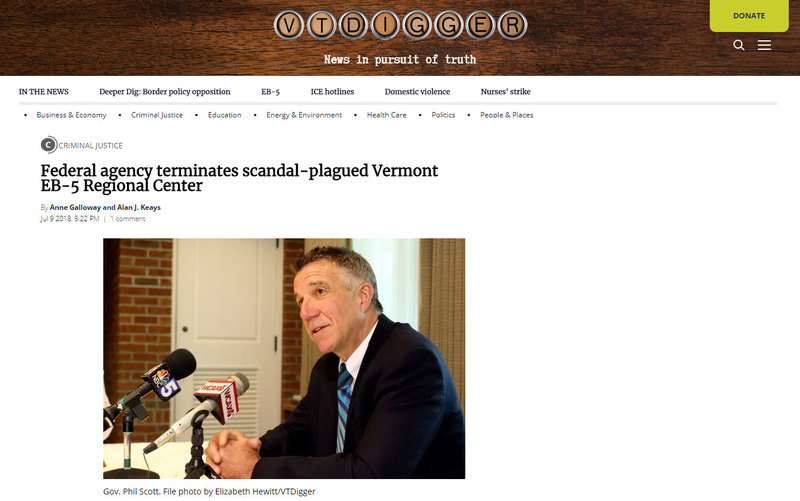 The U.S. Citizenship and Immigration Services notified state officials on July 3 that the program must be shut down immediately.

it intended to terminate the center. In August 2017, Gov. Phil Scott asked the federal agency to consider a gradual wind down of the program.

That request was rejected.

USCIS determined that the Vermont Agency of Commerce and Community Development made material misrepresentations to EB-5 investors and to the USCIS, and failed to address some of those discrepancies in their response to the feds’ notice of intent to terminate last year.

For example, investment documents for the biomedical facility did not state that the project was contingent on products obtaining the approval of the Federal Drug Administration.

In addition, the federal agency pointed to their responses to the biomedical facility in Newport and said that the state was warned of financial red flags in mid-2013, and upon becoming aware failed to notify USCIS and “remained silent in their concerns and took no action as over 83 petitions were approved” in 2014 and 2015.

“These discrepancies and misrepresentations cast doubt on the credibility of [the commerce agency’s] filings and call into question the legitimacy of its operations,” wrote Juliette Harrison, acting chief of the Immigrant Investor Program.

“For these reasons, USCIS has determined by a preponderance of the evidence that the Regional Center no longer serves the purpose of promoting economic growth in compliance with the Program.”

The federal agency cited the diversion of EB-5 investor funds by Ariel Quiros, the owner of Jay Peak, for other purposes, including his own use. Quiros, and Bill Stenger, the developers of Jay Peak Resort have settled with the Securities and Exchange Commission for defrauding 800 investors over an eight year period, from 2008 to 2016.

Shortfalls caused by the Ponzi-like scheme “jeopardized the eligibility of some EB-5 investors” to obtain permanent residency in the U.S.

Hundreds of EB-5 investors who have not yet received green cards in the wake of the fraud at Jay Peak Resort could be negatively impacted, according to TJ Donovan, the Vermont Attorney General. The Von Trapp Family Brewery project, which is in the middle of an EB-5 project, could also be adversely affected, Donovan said. State officials previoulsy opposed the immediate shut down of the center because they have said it could result in the brewery having to refund immigrant investors who would no longer be able to obtain green cards through the Vermont EB-5 Regional Center.

“I was surprised, given the state’s decision to wind down the program in order to honor our commitments,” Donovan said. “We need to get out of the business of the regional center as a state and we need to stop the bleeding and hit the reset button.”

The immigration status of 400 of the 800 defrauded investors has been in limbo since the Securities and Exchange Commission brought 52 securities fraud charges in April 2016 against Stenger and Quiros, the developers of Jay Peak Resort.

That filing stifled development of three projects that were incomplete. It also stalled the approval of green cards for hundreds of investors who must prove that their investments have resulted in job creation. Under the EB-5 program, each investment of at least $500,000 must create 10 direct or indirect jobs.

The largest EB-5 fraud case in the program’s history that played out in the mountains of northern Vermont has tarnished the image of the state and set off a rush to the courthouse. A slew of investor fraud lawsuits have been filed in the past two years against the developers, and even state agencies and officials.

It has also led to some staggering settlements, including one that Raymond James & Associates reached over its role for $150 million, and another for $81 million Quiros reached with the SEC.

In its notice of termination, the USCIS recognizes these concerns over the negative impact on other businesses, but says the EB-5 center can not continue operating if it is not actively promoting economic development. It blames the fallout for the termination on the officials running the center.

“Thus, any harm to businesses which were not listed in the SEC or State complaint is attributable to the Regional Center’s lack of management and oversight which resulted in the diversion of EB-5 funds,” USCIS said.

However, it adds that “problems with the projects are not alleged to have been perpetrated” by state officials or employees of the EB-5 regional center. And while the USCIS gave the state credit for helping to investigate the fraud, it chided officials for the “lax oversight” of the state-run regional center that “allowed the fraud to occur in the first place.”

Michael Schirling, the secretary of the Agency of Commerce and Community Development, which is responsible for the Vermont EB-5 Regional Center, said EB-5 projects have “contributed tens of millions of dollars in economic development including current construction at Mt. Snow and recently completed construction at the Jay Peak Stateside Project.”

“The wind-down plan allows that money to remain invested in Vermont and preserves the many jobs that have been created,” Schirling said in a statement, referring to the plan that USCIS unequivocally rejected.

USCIS says in its termination letter that “job creation and project completion is severely undermined and outweighed by the diversion of funds that the occurred while the Regional Center failed to conduct adequate monitoring and oversight.”

Several companies have already backed out of the state-run program as a result of the fraud at Jay Peak, including Stowe Aviation, which planned an expansion of facilities at the Morrisville airport and Peak Resorts to expand the Mount Snow resort in Dover.

Pieciak said in a statement that “an abrupt termination is not warranted.” In his response to USCIS last year, the commissioner said his department and the center had taken steps to prevent investors from being defrauded in future.

“A slower closure process would better protect investors in VRC-related projects and we will articulate this position on appeal,” he said.

Michael Goldberg, Jay Peak’s receiver, declined to say Monday afternoon what effect the termination of the state-run regional center would have on investors still pursuing their green cards.

“I’m not going to speculate right now because it’s far from over,” Goldberg said. “We’re still analyzing it, but I understand the process is not done and I see the state of Vermont intends to contest it and we fully support that.”

The Vermont EB-5 Regional Center started its “wind down” last year. The hope was that the gradual closure of the center would enable defrauded investors in the Jay Peak projects to obtain green cards through reinvestments in the EB-5 program in existing projects like the Stateside condos which are now complete or in projects in other states.

The wind-down proposal didn’t fly with USCIS. The federal agency said that despite stepped-up oversight, shortcomings with the regional center still remain.

For example, USCIS stated, three years after “this new process was supposedly put in place,” the state was still unable to answer many of the questions posed back in July 2016 and again in August 2017.

USCIS considered “remedial” actions taken by state officials and Goldberg, including the Department of Financial Regulation’s launch of a rigorous compliance program for EB-5 in December 2014, and the recovery of $150 million in a settlement with Raymond James Financial Services, but determined that the effort was too little, too late.