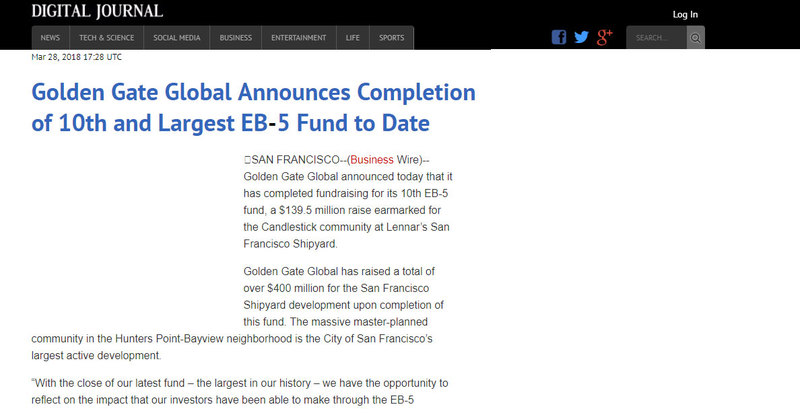 Golden Gate Global announced today that it has completed fundraising for its 10th EB-5 fund, a $139.5 million raise earmarked for the Candlestick community at Lennar’s San Francisco Shipyard.

Golden Gate Global has raised a total of over $400 million for the San Francisco Shipyard development upon completion of this fund. The massive master-planned community in the Hunters Point-Bayview neighborhood is the City of San Francisco’s largest active development.

“With the close of our latest fund – the largest in our history – we have the opportunity to reflect on the impact that our investors have been able to make through the EB-5 program,” said Steven Kay, President and CEO of Golden Gate Global. “Across California, our clients’ investments grow local economies and build communities. We have achieved such goals while maintaining an exacting standard for quality in fund management and quality in client services.”

Over its six years of operation, Golden Gate Global has raised over $600 million from 1,200+ investors across its ten funds, which span projects throughout Northern California. These funds are expected to generate over 20,000 American jobs – thousands of which have already been created.

“Having a partner with the capabilities and track record of Golden Gate Global has been invaluable to us in making the transformative San Francisco Shipyard dream a reality,” said Chris Marlin, President of Lennar International. “We congratulate them on closing their 10th fund and look forward to additional productive partnerships with them in the future.”

Golden Gate Global is a leading EB-5 Immigrant Investment Regional Center based in San Francisco, and is licensed by United States Citizenship and Immigration Services to help facilitate EB-5 immigrant investment into high-economic-impact projects in multiple regions in the United States. The company is founded upon its distinguished executive leadership, successful project partners with demonstrated records, and noteworthy projects with exceptional economic opportunity and return.