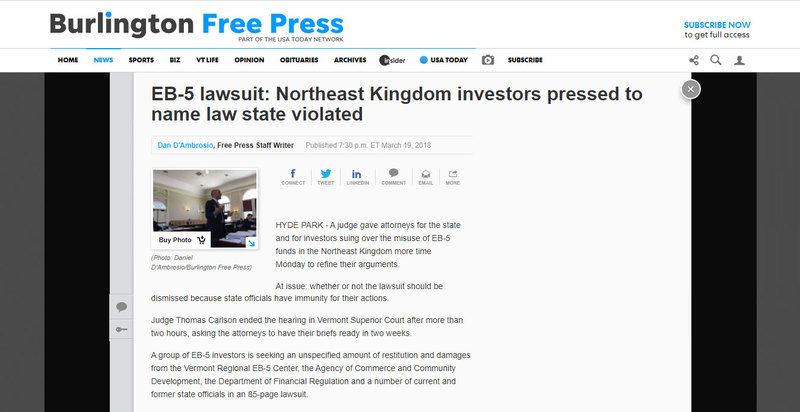 A judge gave attorneys for the state and for investors suing over the misuse of EB-5 funds in the Northeast Kingdom more time Monday to refine their arguments.

At issue: whether or not the lawsuit should be dismissed because state officials have immunity for their actions.

Judge Thomas Carlson ended the hearing in Vermont Superior Court after more than two hours, asking the attorneys to have their briefs ready in two weeks.

A group of EB-5 investors is seeking an unspecified amount of restitution and damages from the Vermont Regional EB-5 Center, the Agency of Commerce and Community Development, the Department of Financial Regulation and a number of current and former state officials in an 85-page lawsuit.

The lawsuit, filed last May in Vermont Superior Court in Hyde Park by Stowe lawyers Barr Law Group says the Vermont Regional Center and Jay Peak essentially were "partners in the largest fraud in Vermont history and the largest EB-5 fraud in U.S. history." 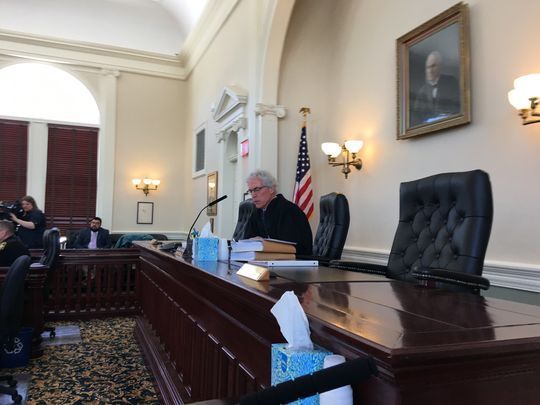 The federal EB-5 program offers a pathway to citizenship for foreign nationals who invest $500,000 in projects that create jobs in economically depressed regions of the country.

Ariel Quiros, former owner of Jay Peak resort, along with partner Bill Stenger, was accused by the U.S. Securities and Exchange Commission in April 2016 of misusing $200 million raised from foreign investors. Quiros was accused of personally profiting from more than $50 million.

In February, Quiros reached a settlement with the SEC that holds him liable for paying back $81.3 million and fines him an additional $1 million. The settlement also requires Stenger to pay a $75,000 civil penalty. Stenger was not alleged to have personally profited from the fraud as Quiros did, officials said.

Both Quiros and Stenger still face lawsuits from the state of Vermont. The U.S. Attorney's Office in Vermont also acknowledged in April 2016 that a criminal investigation was underway.

The lawsuit filed by the Barr Law Group claims the Vermont EB-5 Regional Center failed to prevent the fraud perpetrated by Quiros and Stenger, despite the state's repeated assurances that it would provide uniquely rigorous oversight. The lawsuit goes on to argue that state officials attempted to cover up the misconduct.

On Monday, Solicitor General Ben Battles argued that the investors' lawsuit has not identified any statute that state officials violated. Battles said the claim of breach of contract in the lawsuit is invalid because "there is no contract between any plaintiffs and defendants and without a contract, there can't be a breach."

Battles said a number of the defendants named in the lawsuit were entitled to absolute immunity because they were the highest executive officers in their agencies.

Russell Barr, attorney for the investors, said the state's arguments were "irrelevant and flawed," and that sovereign immunity doesn't apply in this case "because of a situation created by them," referring to state officials.

"You can't promote economic growth if you allow funds to be stolen," Barr said, referring to the mission of the Agency of Commerce and Community Development to bring investment into the state.

Judge Carlson repeatedly pressed Barr and his co-counsel, Chandler Matson, to cite the statutes that state officials had violated. Carlson said "there's nothing in the pleadings so far that lays out the statutory requirements."

Barr answered that U.S Citizenship and Immigration Services, which runs the EB-5 program, issued a notice of intent in August to terminate the Vermont Regional Center because it "failed to comply with the rules, filings and forms" required by the agency.

In its notice, the immigration services agency accused the state of failing to supervise the Jay Peak project sufficiently, saying this "allowed the alleged malfeasance by Quiros and Stenger to occur."

Carlson said Barr's argument would be a good one for a jury to consider, but that even the immigration agency's notice of intent to terminate "doesn't refer to a statute."

"If plaintiffs have a federal statute to do audits that weren't done, please file that," Carlson said.

Barr answered that "those duties are embodied in filings sent to the USCIS."