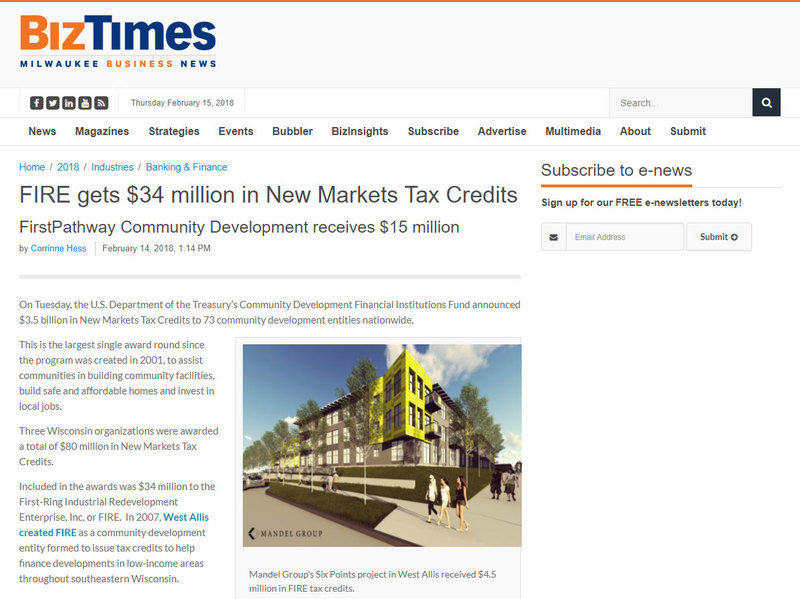 This is the largest single award round since the program was created in 2001, to assist communities in building community facilities, build safe and affordable homes and invest in local jobs.

Included in the awards was $34 million to the First-Ring Industrial Redevelopment Enterprise, Inc. or FIRE.  In 2007, West Allis created FIRE as a community development entity formed to issue tax credits to help finance developments in low-income areas throughout southeastern Wisconsin.

“This is a huge win for West Allis and southeastern Wisconsin,” said John Stibal, president of FIRE. “With this capital we will be able to bring a number of projects to life that can provide long-term, meaningful benefits to some of our most neglected communities.”

The credit provided to the investor totals 39 percent of the cost of the investment and is claimed over a seven-year period. Substantially all of the taxpayer’s investment must in turn be used by the entity to make qualified investments in low-income communities.

“This is great news for the region,” said Bob Kraft, CEO and president of FirstPathway Partners. “We’re excited to once again have the opportunity to continue to use our knowledge and talents in serving communities in need, creating jobs, and growing the economy.”