Auditor to investigate role of state officials in EB-5 scandal 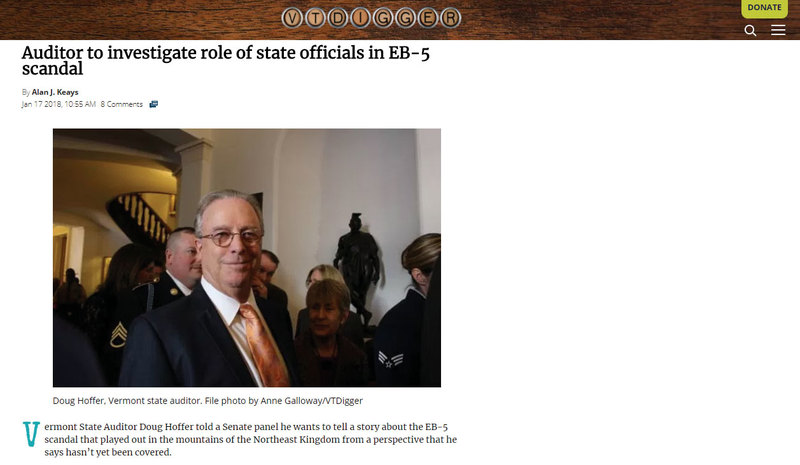 Vermont State Auditor Doug Hoffer told a Senate panel he wants to tell a story about the EB-5 scandal that played out in the mountains of the Northeast Kingdom from a perspective that he says hasn’t yet been covered.

“What did they know, when did they know it, how did they respond?” he said of state employees, officials and appointees. “What we don’t know is how particular officials responded at the time.”

The auditor told the Senate Finance Committee he wanted to conduct an audit of the EB-5 program, looking specifically at the roles played by those entities.

“Obviously, this is a fascinating story but we’re kind of looking at the rearview mirror,” he said. “To me, it’s more interesting as a cautionary tale.”

Hoffer was the first of several speakers Tuesday testifying before the Senate panel during a session titled, “EB-5 in Vermont, Lessons Learned and What’s Next.”

“We’re trying to figure out if there is legislation required to ensure that something like this doesn’t happen again,” said Sen. Ann Cummings, D-Washington, the chair of the Senate Finance Committee.

Cummings added that she wasn’t interested in getting involved in a “blame game,” but instead wanted to see what could be learned.

She said that Hoffer’s proposal had merit. “I think it would be a good thing for him to be investigating,” she added.

Cummings said that she did have a concern that his work not interfere with litigation the state is currently involved with regarding EB-5-related matters.

“We’re trying to protect individual rights and at the same time protect the public’s right to know, and there is a point at which that conflicts,” she said.

Hoffer compared the audit he envisioned to telling a story, without passing judgment on the characters.

“I’m not interested in negligence and malfeasance,” he said, adding he wasn’t conducting a criminal probe. Again, Hoffer said, he saw it as telling the story.

The auditor said that he had the “bodies” within his office to complete such an audit, adding that it would focus “only the actions of state officials.” He declined to provide a specific timeline for conducting the review, adding that it wasn’t something that could be “turned around in a couple months.”

He said he understood he would have to discuss the matter further with the Vermont Attorney General’s Office to ensure that his work did not interfere or jeopardize any pending litigation involving the state that revolves around the EB-5 program.

The state is currently involved in two court cases. The Vermont Attorney General’s Office sued Ariel Quiros and Bill Stenger, the developers of Jay Peak Resort, for defrauding investors in April 2016. The two men raised more than $400 million and are accused of misusing about half of the money as they developed hotels, condos and other amenities at the ski resort on the Canadian border. After nearly two years, that case has stalled in the discovery process.

The EB-5 program allows foreign investors to put $500,000, plus administrative fees, into qualified projects. If that project meets job creation requirements, the U.S. Citizenship and Immigration Service gives eligible investors permanent U.S. residency. USCIS last summer issued a Notice of Intent to Terminate the EB-5 program because of the state failed to protect investors from the fraud.

The state is also facing a class-action lawsuit filed by five EB-5 investors who accuse 10 former and current state officials of complicity in the fraud case. The lawsuit alleges that officials with the state Agency of Commerce and Community Development essentially acted as partners in the fraud.

Without the stamp of approval from the state of Vermont, which ran the EB-5 Regional Center, many of the investors have said they would not have invested. The lawsuit claims state officials ignored allegations of financial wrongdoing and actively promoted Jay Peak projects overseas on behalf of the developers.

The state has filed a motion to dismiss the lawsuit outright, citing sovereign immunity as a defense. Attorney General TJ Donovan has said the state employees were acting in good faith as they carried out their duties.

Chief Assistant Vermont Attorney General Bill Griffin, testified that while he didn’t have all the details on what the auditor was proposing, he thought it would be a massive undertaking.

That’s because the state has collected about 1 million documents related to one of the pending lawsuits, and expects that number to increase by another 500,000 records.

Griffin said the Attorney General’s Office has a “very good” relationship with the auditor and “we’re committed to working with him.”

Records have already been released to defense attorneys as part of the discovery process, but those documents have not been released to the public. The state has provided only a smattering of documents to VTDigger and other media organizations since April 2016. Griffin has repeatedly cited a relevant litigation exemption in refusing to release email correspondence and other records from state officials who were directly involved in overseeing the EB-5 program during the time in which the fraud occurred. The most recent denial for a narrow request for documents was issued to VTDigger in December.

Both Griffin and Michael Pieciak, commissioner of the state Department of Financial Regulation, provided the panel Thursday with an update on the public release of records in the state’s case against Quiros and Stenger.

Pieciak said the state was close to hiring a firm to redact “personally identifying information,” such as Social Security numbers and bank account routing numbers, from the documents before they could be released.

Once those documents are redacted, Griffin said the state will file a motion in Washington County Superior Court, where the case is pending, seeking approval of the judge to publicly release the records. Such filings and the release of records will take place on a “rolling basis,” following the discovery process in the case.

Quiros and Stenger would then have the opportunity to object, Griffin said, though he expected the judge would grant the request to make the documents public.

The most recent schedule in the state’s case against Quiros and Stenger pushed the deadline to complete discovery back nearly a year, from December 2017 to Nov. 15, 2018, with the state citing the large number of documents that need to be produced and reviewed.

Asked earlier during the meeting if he believed he would get access to the documents needed to conduct his review, Hoffer replied, “By statute we have access to every single document produced by state government in service of state government.”