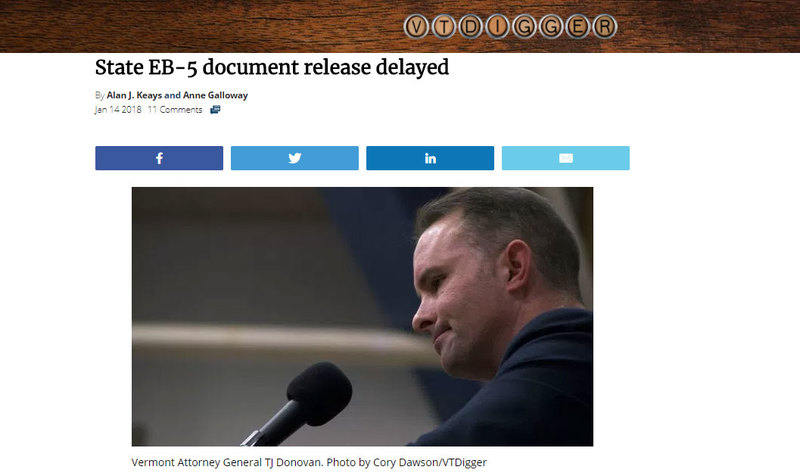 The state is taking longer than expected to release documents in the EB-5 investor fraud case against Jay Peak Resort developers.

The deadline was originally Dec. 31. The Vermont Attorney General’s office recently asked the court to extend the deadline to Nov. 15, 2018.

By the time all of the records are released, more than two and a half years will have passed since the case was originally filed in April 2016, and nearly a year since Gov. Phil Scott called for an “expedited” plan to release the records in March 2017.

The latest justification for the hold up is a delay in the hiring of a company to redact personal information from as many as 1.5 million documents.

While records were supposed to be released on a rolling basis starting as early as last month, the Vermont Attorney General’s office will now have until Nov. 15 to release all of the discovery documents, according to the latest court filing in the state case.

Vermont Attorney General TJ Donovan did not respond to requests for comment.

Washington County Superior Judge Mary Teachout has approved the attorney general’s request, which the defendants, Ariel Quiros and Bill Stenger, the developers of Jay Peak, also signed off on.

The court filing indicates that some records have already been released to the defense.

Nevertheless, a VTDigger request for specific records made in December was rejected on the basis of the relevant litigation exemption, which was cited for the state’s case against the developers and a case brought by the investors against state officials brought by Barr Law Group.

Portions of records that would be released to the public, possibly months hence, would be blacked out.

The redaction and delay is tied to the Vermont Attorney General’s office footdragging in the state’s case regarding the release of information that could provide details about how officials from the Vermont EB-5 Regional Center allowed the fraud at Jay Peak to continue from 2008 to 2016, despite warnings from an immigration attorney, an EB-5 expert and a former Jay Peak business partner.

Asked Thursday at his weekly press conference about the status of the search for a redaction contractor, the governor said he would need to look into the matter further before providing an answer.

The state Department of Financial Regulation in early November posted online a request for proposals for a company to go through more than 800,000 pages of “scanned materials,” with that number of documents expected to increase.

According to the original RFP, bids were due Nov. 21, with the “selection notification” to take place Nov. 27. The redaction project, according to the initial RFP, was set to start Dec. 4.

But, as of this week, the state has still not hired a firm. 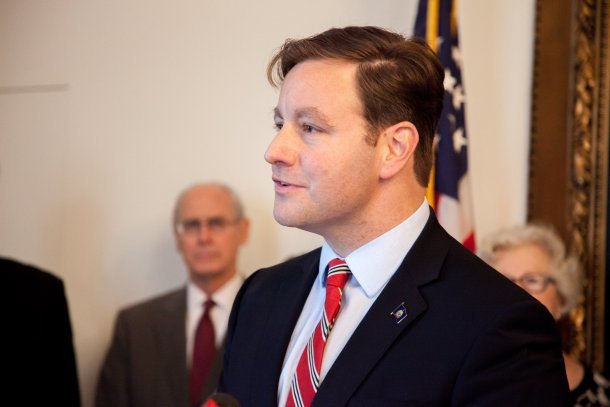 Michael Pieciak commissioner of the state Department of Financial Regulation, said this week the state had two companies interested in submitting bids.

The process was delayed, he added, when work started on firming up the numbers, requiring the state to send the potential bidders a sampling of the types of documents that would need to be redacted to remove any “personally identifying information.”

“Then they came back and said, “There’s PII over these things,’” and provided their “best final offer,” Pieciak said. Work then started out hammering out a final contract, according to the commissioner.

Also, Pieciak said, because it is a contract involving sensitive data, the state had to ensure the company brought on board met the appropriate requirements in terms of cybersecurity.

“That sort of slowed us down a little bit,” he said. “All of that has now been cleared up.”

This week the state sent and “offer” to a company and is awaiting a response, according to Pieciak. The commissioner said he hoped to have the contract in place with the vendor by early next week, at which time he could reveal more contract details, including the company’s name and financial parameters.

In November when it was announced the state would be hiring a redaction company, the planned called for filing a motion with the court in December to release the first batch of 5,000
documents.

Once the court approved that release, the documents would become public.

Pieciak said this week that he was “hopeful” that first batch of documents can be done and motion filed with the court by late this month or early next month.

According to a press release when that expedited plan was announced a discovery process had not been set in the state case. However, the release stated, “This process is likely to continue through the end of 2017.”

The latest schedule approved late last year by Judge Mary Miles Teachout, presiding in the case pending in Washington County Superior Court, shows the date for the completion of discovery has been pushed back considerably – to Nov. 15, 2018.

“The state has been working diligently to complete the production, and to date, has produced over one million pages of documents,” a court filing submitted jointly by the state and attorneys for Quiros and Stenger. “However, many documents remain to be reviewed and produced.”

That number, according to the filing, is at least another half-million records leading to the need for the additional time to complete the discovery.

“The parties understand that this is an unusual request, but believe additional time is absolutely necessary to complete the responsive discovery in this important matter,” the filing read.

State and federal regulators brought separate lawsuits in April 2016 against Quiros and Stenger alleging they operated a “Ponzi-like scheme” with money raised through the EB-5 visa program from foreign investors.

The lawsuits alleging violations of state and federal securities laws, claim Quiros and Stenger misused $200 million in EB-5 funds, with Quiros accused of looting $50 million for his personal use.

The money had been raised to fund a series of development projects in Vermont’s Northeast Kingdom, including massive upgrades at Jay Peak as well as other projects in Burke and Newport.

The state had kept records related to the case from public view, despite requests rom VTDigger for the release of the documents. The documents could shed light on what state officials knew and when about the fraud.

Former Attorney General Bill Sorrell said the documents would not be made available to the public until after the state’s lawsuit against Stenger and Quiros ended, citing an exemption in the Vermont Public Records Act for relevant litigation.

Court documents don’t yet list a trial date for the state’s lawsuit against Stenger and Quiros, but it wouldn’t take place until sometime after the discovery deadline in November 2018.