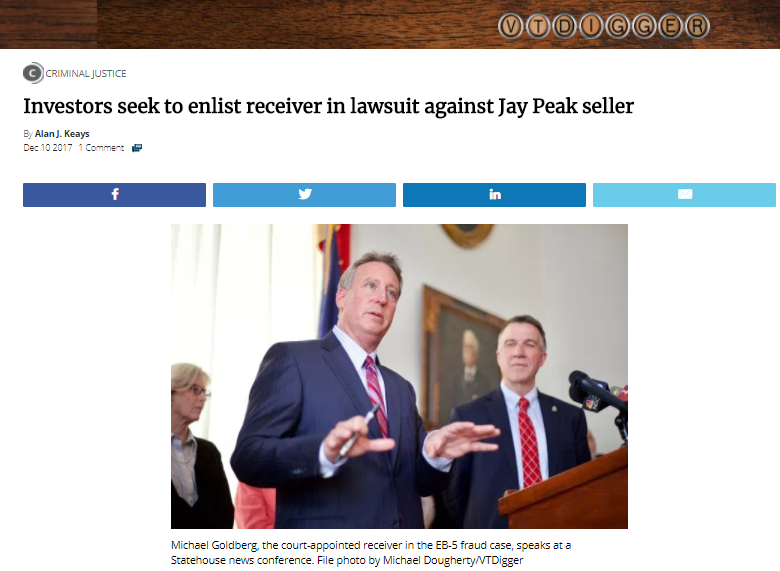 A lawsuit brought by EB-5 investors claiming that a Canadian company “aided and abetted” an alleged fraud scheme at Jay Peak Resort may be clearing a big hurdle.

The investors say Saint-Sauveur Valley Resorts Inc. knowingly and improperly accepted $15 million in EB-5 funds from Miami businessman Ariel Quiros as payment for Jay Peak in 2008. Attorneys for the company have denied those allegations.

The parties in the case have disagreed over whether the investors could even sue the Canadian company. Jay Peak is in receivership, as are other properties at the center of the alleged Northeast Kingdom investor fraud scandal. Saint-Sauveur has argued in court that the lawsuit should be dismissed because the authority to sue rests with Michael Goldberg, the court-appointed receiver overseeing those entities.

Keith Miller, an attorney for the investors, submitted a filing recently aimed at addressing that concern by adding Goldberg as a plaintiff.

Miller asked the judge to allow him to amend his complaint to add Goldberg. U.S. District Judge Christina Reiss, of the District of Vermont, has yet to rule on that request or the motion to dismiss the case.

Goldberg has not objected to becoming a plaintiff, according to Miller.

Goldberg was appointed the receiver in the fraud case by a federal judge after the U.S. Securities and Exchange Commission and state regulators brought lawsuits in April 2016 against Jay Peak owner Ariel Quiros and Bill Stenger, the resort’s former CEO and president.

The lawsuits alleged the two men misused $200 million of the more than $350 million they raised from foreign investors via the federal EB-5 visa program to fund massive developments, including upgrades at Jay Peak, a hotel at Burke Mountain and two failed efforts in Newport.

The EB-5 program provides U.S. residency to foreign investors who put at least $500,000 into a qualified project that creates a required number of U.S. jobs.

In the SEC case, federal regulators say the two men orchestrated a “Ponzi-like” scheme that began by using investor money, which was supposed to be held in escrow for two hotel projects, to buy Jay Peak Resort from Saint-Sauveur Valley Resorts.

Quiros and Stenger used money from investors for Tram House Lodge and Hotel Jay for the purchase of the resort then had to seek more investors for future developments to backfill the two hotel projects, federal regulators have said.

The plaintiffs suing Saint-Sauveur are EB-5 investors Tony Sutton, Glyn Moser and Patrick Tawil, all of whom said at the time they believed they were investing in the first construction projects at Jay Peak. They were not aware that their money had been used to buy the resort instead.

The lawsuit alleges the Canadian company had knowledge of what the two developers were doing and illegally accepted as payment for the resort the money that was supposed to go to the hotel projects.

The Canadian company, in an affidavit, denied knowledge of the alleged fraud as well as any use of EB-5 money by Quiros to purchase the resort.

The SEC, in its case against Quiros and Stenger, blamed those two for the transaction and did not accuse Saint-Sauveur of playing any improper role.

The investors’ lawsuit claims otherwise. The suit says the Canadian company did not have “a written letter of intent or other agreement” and did not ask for proof that Quiros had the money to make the $23.5 million purchase, which included $8 million in assumed debt.

Attorneys for the EB-5 investors suing Saint-Sauveur say they had been trying for some time to get Goldberg to agree to serve as a plaintiff.

Late last month a federal judge in Florida, where the SEC case against the two developers is pending, signed off on a motion allowing Goldberg to join the lawsuit brought by those EB-5 investors in federal court in Vermont.

The SEC case was brought in Florida because that’s where Quiros resides and many of his businesses are based.

According to a filing by Miller, Goldberg and the SEC did not oppose being named as an “indispensable party plaintiff” in the investor lawsuit in Vermont.

The order from the Florida court allowing Goldberg to join the Vermont lawsuit does have some conditions, including that “absent the Receiver’s consent, the extent of the Receiver’s involvement in the Vermont Action shall be limited to cooperating on discovery matters.”

Also, according to that order, the receiver and the receivership estate will not be on the hook for any costs or fees associated with the Vermont action.

And, the order stated, any proceeds or settlement funds from the case in Vermont will be “deemed property of the receivership estate,” with the Florida court having the say over how that money would be distributed.

Neither Goldberg nor David Pocius, a Burlington attorney representing Saint-Sauveur, could be reached Friday for comment.