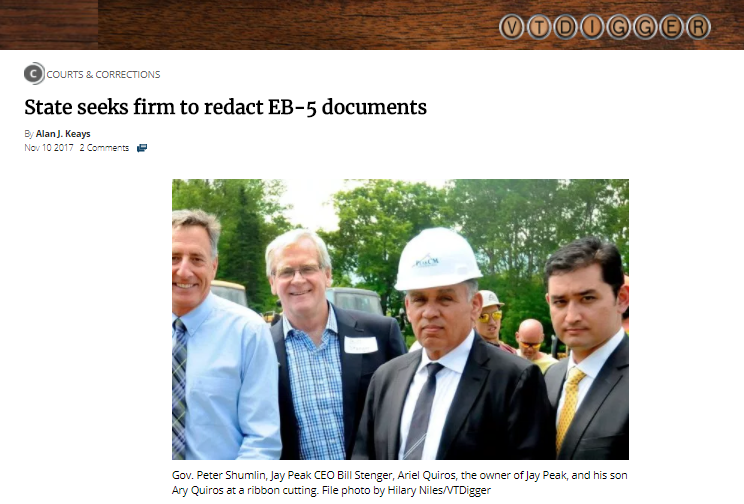 The state of Vermont is seeking a company to redact personal identifying information from hundreds of thousands of documents in its EB-5 investor fraud case against Jay Peak developers before releasing them to the public.

The state Department of Financial of Regulation posted online this week a Request for Proposals for a company to go through what is currently 800,000 pages of “scanned materials,” though the number of pages is expected to rise.

“The de-identification process would entail the Contractor deleting and/or redacting (personal identifiable information) from the records so that they can be disclosed to the public,” the RFP states. “Contractor will need to ensure that no (personal identifiable information) is disclosed in the records to be made public and to provide expert-level certification of de-identification.”

Gov. Phil Scott earlier this year called on the Department of Financial of Regulations to develop a plan for the “expedited” release of documents in its EB-5 investor fraud lawsuit against Jay Peak owner Ariel Quiros and the resort’s former president, Bill Stenger.

The plan calls for releasing the documents as they become part of the discovery process in the state lawsuit against Quiros and Stenger.

State and federal regulators brought separate lawsuits in April 2016 against the two men, alleging they operated a “Ponzi-like scheme” with money raised through the EB-5 visa program from foreign investors.

The lawsuits alleging violations of state and federal securities laws, claim Quiros and Stenger misused $200 million in EB-5 funds, with Quiros accused of looting $50 million for his personal use.

The money had been raised to fund a series of development projects in Vermont’s Northeast Kingdom, including massive upgrades at Jay Peak as well as other projects in Burke and Newport.

The state had kept records related to the case from public view, despite requestfs rom VTDigger for the release of the documents. The documents could shed light on what state officials knew and when about the fraud.

Former Attorney General Bill Sorrell said the documents would not be made available to the public until after the state’s lawsuit against Stenger and Quiros ended, citing an exemption in the Vermont Public Records Act for relevant litigation.

The state Department of Financial Regulations has since made available to attorneys for Quiros and Stenger about 800,000 pages of documents through the court process. Before publicly releasing those documents as part of the “expedited’ plan, the state wants personal identifiable information removed.

Michael Pieciak, DFR commissioner, said Thursday that the department had looked at doing the redaction work themselves, but estimated that it would take two attorneys a year and a half working full-time to go through all the documents.

That led to the decision to seek an outside company, which uses special “sophisticated litigation software,” to do the redacting work, he said. By using such a contractor, he said, he expects a faster timeline for the release of the documents, as well as having the work done more accurately at a lower cost.

He called the move of hiring an outside contractor to do the redacting work unusual.

“We never had a situation where we had a case of this magnitude, both in terms of the underlying fraud but also in terms of the number of documents,” the commissioner said. “In a normal cases, you might have 10 pages of documents and we could could easily have a lawyer do the (personal identifiable information) review.”

He said given the 800,000 in documents just from his department, which he said are “riddled” with personal identifiable information, it made sense to seek an outside company specializing in such work.

Pieciak said he wasn’t sure how much it will cost the state for the company to do the redacting work.

“We’ll see what the responses are,” he said, adding that the state could seek to recoup that expense from the defendants as part of any resolution of the case.

Once redacted, the commissioner said, the documents would made available for public release.

A person’s name, Pieciak said, is not something that would be redacted.

“Names are not PII,” he said, using shorthand for personal identifiable information.

The plan calls for a contractor to work through “a batch” of 5,000 of documents first, and then the state will see how effective the process is working.

“It will give us the sense of the quality, the control and all that,” Pieciak said. “It will allows us to take those 5,000 documents and file a motion with the judge asking to lift the seal of discovery and allow the documents to become public.”

Attorney General TJ Donovan said Thursday that “sometime in December” he expects to file a motion with the court to release that first batch of 5,000 documents.

“When they’re actually released and the court approves it, I can’t give you that specific date because that’s up to the court process,” he said.

Both Donovan and Pieciak said they expect the public release of the documents will take place on a “rolling” basis, with the documents to be posted on DFR’s website.

“Those are not things that a defendant gets to have during the litigation,” Pieciak said. “Everything else that’s discoverable that’s being released as part of the litigation will be made public, presuming the the judge agrees to that.”

“I think it’s just important to remember the genesis of this transparency plan,” Pieciak said, “which was to balance this tremendous data drift and public disclosure of every last document that can be disclosed weighed against the other tremendous public interest of ensuring the enforcement case is successfully brought.”