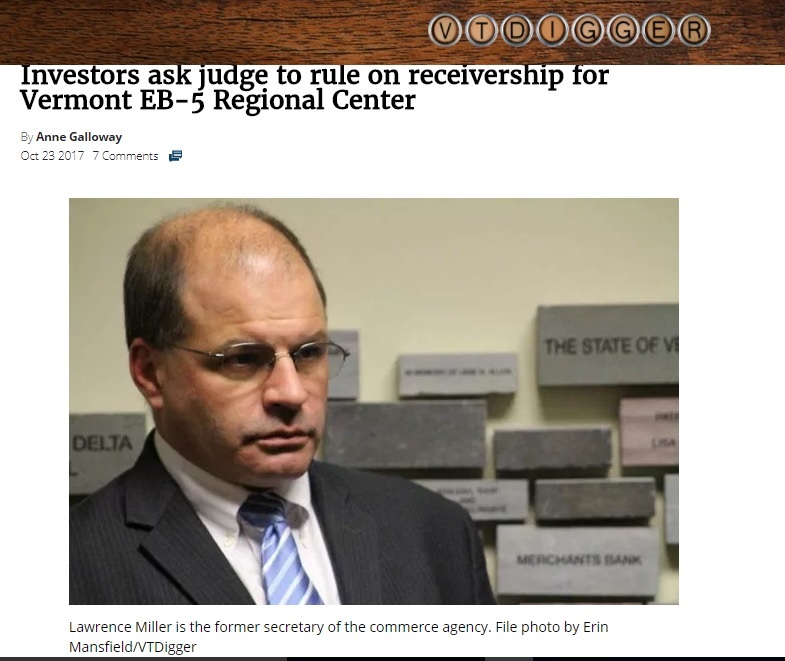 A group of EB-5 investors has asked a superior court judge to put the Vermont EB-5 Regional Center in receivership because the state has demonstrated that it cannot protect investors.

The motion, filed Friday in Lamoille County Superior Court, says the appointment of an independent receiver is “essential” for the protection of defrauded investors in Jay Peak Resort who have not yet received green cards and investors in other projects.

The state is claiming a sovereign immunity defense. TJ Donovan, the Vermont attorney general, who is defending the state agencies and 10 former and current state officials named in the suit, has said state employees were acting in good faith and were simply carrying out their duties.

The investors say the Vermont EB-5 Regional Center should be managed by a receiver because state officials have not taken responsibility for their failure to prevent the fraud at Jay Peak. The plaintiffs allege that the center falsely claimed the projects were audited by the state, actively promoted the projects to new potential investors after state officials were made aware that investor monies had been misused, and engaged in a coverup.

The investors say the state “directly sold” the Jay Peak projects to investors by promising faster green card approvals, quarterly reports and an assurance of compliance. Legal agreements between the state and the developers that were given to investors included guarantees that state officials would be responsible for oversight, management and compliance.

They cite an example of the state’s alleged complicity in a new affidavit from an EB-5 expert who claims that the state knew in 2012 about kickbacks to Jay Peak immigration attorneys.

The motion is the latest twist in a class action case brought by investors against the state commerce agency, the Vermont EB-5 center and state financial regulators for failing to protect them from the largest fraud in the history of the EB-5 program.

Barr Law Group of Stowe, which is representing the investors, argues that a receivership is the logical next step in light of the state’s refusal to accept any obligation for oversight, management or administration of the Jay Peak projects and a decision by the federal government to close the Vermont center. The U.S. Citizenship and Immigration Service issued a notice of termination in August, citing a “preponderance of the evidence” that state officials failed to properly monitor and manage the Jay Peak projects for many years, effectively looking the other way as the developers allegedly stole money from investors. The Vermont Department of Financial Regulation put regulatory controls in place in 2015 that officials say are sufficient to protect investors.

State officials, who were supposed to be overseeing the projects and ensuring that investor funds were protected, deflected and ignored questions about the finances at Jay Peak raised in 2012 by EB-5 experts, former business partners and investors, according to documents in the public record. The director of the Vermont EB-5 Regional Center questioned the motives of the people who raised red flags and instead of investigating allegations of financial improprieties, actively promoted the Jay Peak projects to investors, communications show.

Four years later, Jay Peak’s former owner Ariel Quiros and former CEO and president Bill Stenger were accused of using investor funds to buy the resort. They then allegedly perpetrated a “Ponzi-like” scheme in which they used money from new investors to backfill the cost of projects for previous investors. The Securities and Exchange Commission brought 52 counts of securities fraud against Quiros and Stenger who are accused of misusing $200 million in investor funds in eight projects through the EB-5 program. The investments were meant for massive improvements at the Northeast Kingdom ski resort, another resort in the region and a biomedical facility. The projects are now being managed through a receivership.

Green cards for about 400 out of about 900 investors have been in jeopardy because of the fraud. Each foreign investor put up $500,000, plus an administrative fee, in the Jay Peak projects in exchange for U.S. residency.

The receivership motion features new allegations that the Vermont EB-5 Regional Center promised investors fast-track approval for green cards. An official flier promoting the Vermont center as the only state-run EB-5 program in the nation claims that investors in Vermont projects “would be given priority” by U.S. Citizenship and Immigration Service. (In an email communication obtained by Barr Law Group, USCIS said it did not give preferential treatment to investors in the Vermont regional center.)

The investors also cite an affidavit from an EB-5 expert who says there was “clear coordination” between Vermont EB-5 Regional Center and Jay Peak representatives.

From the booth, Jay Peak “packets” were distributed to immigration lawyers. The packets included agreements for payouts to attorneys who brought new investors to Jay Peak, Gibson says. One fill-in-the-blank form obtained by Barr Law Group featured a kickback of $25,000 for Shen Law.

Gibson says “there is no chance” that the Vermont Regional Center was not aware of the referral agreements, which gave Jay Peak an “illegitimate” competitive edge over other EB-5 projects around the country “because the immigration lawyers who received the financial incentive pushed investors to a project that otherwise could not compete.”

He also says that Jay Peak made representations in front of state officials to immigration lawyers and investors that the state audited the financials and operations at the resort.

The state auditing statements were a “pivotal” selling point, he said. Gibson said he had analyzed the business prospects of Jay Peak and found that “Jay Peak’s projects and plans presented almost no chance of making money and producing a return on the enormous amount of capital being invested.

“However, to compensate for the foundational and obvious deficiencies in its business model, Jay Peak provided assurances to its investors by claiming that their promises of profit were backed up and audited by the State run Vermont Regional Center,” Gibson said.

Gibson raised concerns about the kickbacks, Jay Peak’s business outlook and coordination between state officials and the EB-5 developers they were supposed to be monitoring. He sent a series of emails in 2012 to Kessler and John Cronin, the former head of the securities division of the Vermont Department of Financial Regulation, alleging that Jay Peak was “systematically engaged in unauthorized unlicensed broker-dealer conduct.” His questions were ignored.

“It was obvious then that the Jay Peak projects represented a gravy train of travel, opportunity, lucrative fees, and opportunity,” Gibson said. “Everyone at the booth, and everyone who received one of those packets wanted to ride the gravy train, but no one wanted to hear anything that I had to say.”

Investors say the receivership is necessary because the state has not owned up to its role in the fraud and several key state officials who were present when the fraud at Jay Peak occurred remain involved in the state’s EB-5 program.

Gov. Phil Scott and the Vermont Department of Financial Regulation have proposed that the state retain control of the center as it “winds down” over the course of a decade.

That’s unacceptable to the investors suing the state. They agree the center should be closed down over time, but they believe that from here on out the state’s EB-5 program should be run by an outside, independent securities firm in order to show USCIS that the regional center can comply with EB-5 laws and regulations. A “premature” termination by USCIS, they argue, would hurt innocent investors in other projects and “erode the public trust in Vermont’s government and expose the State to further liability.”