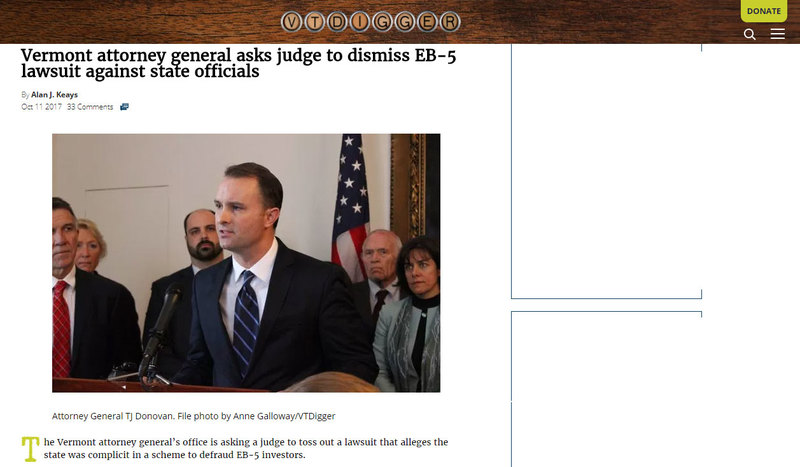 The Vermont attorney general’s office is asking a judge to toss out a lawsuit that alleges the state was complicit in a scheme to defraud EB-5 investors.

In a 100-page filing this week, attorneys for the state refer to the action brought by five EB-investors as a “shotgun” lawsuit with “scattershot” allegations that lacks specifics. The motion to dismiss asserts that the case is barred by the sovereign immunity doctrine, which protects the state and officials against lawsuits.

“Essentially, what you have in this complaint is somebody throwing everything, including the kitchen sink, at the wall, seeing what sticks,” Attorney General TJ Donovan said Tuesday. “In order to go forward, you need a specific allegation of fraud.”

The proposed class-action lawsuit has been filed by five EB-5 investors who accuse state officials of complicity in a $200 million investor fraud at Jay Peak Resort.

The lawsuit alleges that officials with the commerce agency acted as partners in the fraud. The Vermont EB-5 Regional Center, an arm of state government, was responsible for monitoring the projects to ensure that investors were protected.

State officials, however, over an eight-year period ignored allegations of financial wrongdoing and actively promoted Jay Peak projects overseas on behalf of the developers.

Federal regulators say that more than 800 foreign investors from 74 countries were defrauded by the Jay Peak developers.

Without the stamp of approval from the state of Vermont, many of the investors have said they would not have invested $500,000 in Jay Peak to obtain a green card through the EB-5 program.

Russell Barr, principal of the Barr Law Group based in Stowe, represents the investors suing the state. He said Tuesday that the lawsuit is as specific as it can be at this time given that the allegations span a decade and the state has blocked his attempts to obtain depositions of witnesses and subpoena records.

“This is a 10-year fraud, this isn’t somebody slipping on banana,” Barr said. “That complaint is as detailed as you could possibly imagine given the fact that they (the state) are not giving up the information to the public.”

Judge Thomas Carlson previously agreed to a state request to postpone any depositions pending a decision on the motion to dismiss the case.

Donovan said depositions and other discovery cannot be permitted until the judge rules.

“You don’t get to do a fishing expedition,” the attorney general said.

The case is one of several stemming from the largest alleged fraud case in the state’s history. It is the only lawsuit pending, however, that has named state agencies and employees as defendants.

Ariel Quiros, a Miami businessman and Jay Peak’s owner, is no longer contesting the allegations leveled against him by the U.S. Securities and Exchange Commission in a 52-count complaint brought in April 2016. The only matter left to be decided is how much, if anything, he must pay in damages and penalties.

SEC attorneys have said that Quiros took as much as $191.8 million in “ill-gotten” gains through the projects.

Bill Stenger, Jay Peak’s former president and Quiros’ past business partner in the EB-5 funded developments, has also agreed not to contest the charges brought against him by the federal regulators.

Both men are under a federal criminal investigation and face a civil action in state court in Vermont filed by the Vermont Department of Financial Regulation.

The state’s recent filing of the motion to dismiss the lawsuit brought by the five EB-5 investors comes on the heels of a hearing last month in the case in which the state asserted sovereign immunity as protection against the action.

“The State has retained its sovereign immunity for all claims Plaintiffs appear to assert in their Complaint,” the state reiterated in its filing.

At the hearing last month, Chandler Matson, an attorney for Barr Law Group, discounted the notion that the state is protected by immunity in the Jay Peak case.

Matson argued that Vermont EB-5 Regional Center officials marketed securities when they directly solicited investors on behalf of the resort developers and consequently were subject to securities laws requiring them to protect investors from fraud. In 2012, state officials broke the law, Matson contends, when they refused to investigate allegations that the developers had misappropriated money.

The attorney general’s office, in its motion to dismiss the lawsuit, which was filed on Monday, argues that no state employee ever sold securities to investors.

“There is no allegation, nor could there be, that any Defendant ‘transacted business’ with any Plaintiff, because no Plaintiff bought any security from any Defendant,” the filing stated, later adding, “They neither allege that any specific Defendant performed any specific act that amounted to representing either another ‘broker-dealer’ or the issuer of securities, ‘in effecting or attempting to effect purchases or sales of the issuer’s securities.’”

At a press conference last month, Gov. Phil Scott said the attorney general’s immunity arguments in the EB-5 case undermine trust in government. The idea that the state is immune from all litigation “doesn’t give me a good feeling in my soul,” Scott said.

“We would be in constant, constant litigation, I believe, if we didn’t have some immunity, but we have to use that righteously,” Scott said.

Scott was asked Tuesday about the case. “He’s doing what he’s thinks is best to represent the state of Vermont,” the governor said of the attorney general. “At this point in time, I’m relying on his expertise to bring us through this.”

Asked Tuesday if he supported appointing a special prosecutor to probe the EB-5 fraud allegations involving Jay Peak developments, the governor said he didn’t believe now would be the right time, because of the state’s lawsuit pending against the developers, but he didn’t rule it out in future. “That doesn’t mean there won’t be an opportunity, if we don’t get to the bottom of everything, and we need to put the general public at ease, from that perspective, we could still utilize that,” Scott said.

Donovan said immunity should not be used in every case, but the blanket defense is warranted in this lawsuit. State employees were acting in good faith and were simply carrying out their duties, he said.

“In this case it’s being asserted for a very valid reason, there is no specific allegation of fraud,” Donovan said.

Without the long-standing concept of sovereign immunity, he said “you wouldn’t have anybody working in government or anybody willing to make a decision in government exercising their discretion for fear of being sued.”

“Follow the money here, the money didn’t go to the state. What we should be focusing on is the AG’s lawsuit against Stenger and Quiros. That’s where we’re going after the money,” Donovan said. “The AG”s office is alleging fraud against Quiros and Stenger, that’s where we should focus.”

Donovan said no state employee is alleged to have been “lining their pockets.”

Barr, the attorney for the investors, countered that he didn’t believe immunity applied in this case because state officials acted in the same manner as if they were running a private business.

“This is a small group of government actors, who were traveling, promoting, planning, and marketing the biggest fraud in Vermont history,” Barr said. “For the sake of the state, for our credibility as a state, we cannot allow those same actors to hide behind this concept of immunity.”

“They were part and parcel with this fraud and they do not, they should not, and they will not have sovereign immunity, it has to fail for the legitimacy of our state government,” Barr said.

In its filing Monday, the state also argued that the investor lawsuit is barred by an order issued in the SEC case against Quiros and Stenger. That order grants only the court-appointed receiver, who is overseeing Jay Peak Resort and other properties, the authority to bring investor lawsuits, the state contended.

The receiver’s power is “exclusive,” the AG’s office argued. “Investors, whether individually or as a class, are barred from bringing actions to vindicate wrongs allegedly done to them in the course of their investment in the Jay Peak Project limited partnerships,” the state attorneys wrote.

Assistant Attorney General Megan Shafritz, chief of the civil litigation division of the Vermont attorney general’s office, submitted the motion to dismiss on behalf of three state entities and 10 state officials named as defendants in the lawsuit.

The state entities listed as defendants include the Vermont EB-5 Regional Center, the Vermont Agency of Commerce and Community Development and the Department of Financial Regulation.

The lawsuit also names 10 individual defendants, who are or were state officials. They are James Candido, Brent Raymond and Eugene Fullam, the former directors of the regional center; Joan Goldstein, the interim director of the center; William Carrigan, deputy commissioner of the Securities Division; Michael Pieciak and Susan Donegan, the current and former commissioners of the Department of Financial Regulation; Patricia Moulton and Lawrence Miller, former secretaries of the commerce agency; and John Kessler, general counsel for the commerce agency.

Barr said Tuesday he will file a response to the state’s motion to dismiss along with a motion asking the judge to allow the discovery process, including the deposition of witnesses, to get underway as soon as possible.