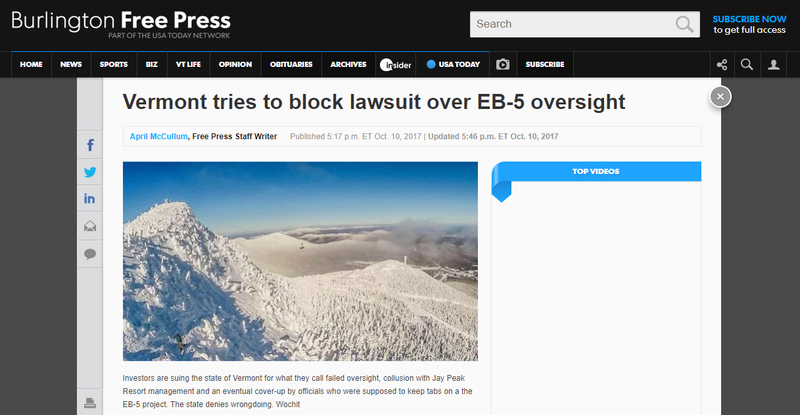 Investors are suing the state of Vermont for what they call failed oversight, collusion with Jay Peak Resort management and an eventual cover-up by officials who were supposed to keep tabs on a the EB-5 project. The state denies wrongdoing.

The state of Vermont says foreign investors who planted $500,000 in Vermont private economic development projects, only to be caught up in an alleged fraud scheme, have no right to sue the government officials who oversaw the projects.

The Vermont Attorney General's Office is asking state Superior Court in Hyde Park to throw out an investor lawsuit, claiming various levels of immunity for the state and its employees.

At issue is whether the state-run Vermont Regional Center, which oversaw EB-5 foreign investment projects in Vermont, can be held responsible for failing to prevent fraud at seven projects connected to Jay Peak, Inc., led by businessmen Ariel Quiros and William Stenger.

The allegations of fraud became public in April 2016, when the U.S. Securities and Exchange Commission and Vermont investigators unveiled parallel complaints against Quiros and Stenger. Stenger has since settled claims with the SEC, while Quiros is no longer contesting the complaints.

Investors followed with their own lawsuit, claiming that for years state officials had willfully ignored red flags at Jay Peak while promoting Vermont's unique state oversight of the EB-5 program as a benefit to investors.

The Vermont Attorney General's Office responded to the investor lawsuit Monday with a motion to dismiss the lawsuit, supported by 170 pages of legal arguments and exhibits.

The state claims that investors are not allowed to file a lawsuit on their own because a federal court has appointed a receiver to represent their interests.

If that isn't enough to end the lawsuit, the state is also arguing that each state agency and state official involved in the EB-5 program is immune from liability in some way.

Absolute immunity protects top government employees when they act within the general authority of their office, regardless of intent.

The investors claim that lower-level state employees ignored serious concerns about the Jay Peak EB-5 projects that were brought to their attention.

In response, the Attorney General's Office says a state employee has discretion over whether to launch an investigation into a complaint. The state claims that ACCD attorney John Kessler and three former directors of the Vermont Regional Center — James Candido, Brent Raymond and Eugene Fullam — have qualified immunity, which protects them as long as they are working in good faith.

"If a state official fails to enforce general safety regulations, he or she is not liable to those injured from the lack of enforcement," the state argues.

An attorney for the EB-5 investors, Russell Barr of Barr Law Group in Stowe, said Tuesday that immunity should not apply to the EB-5 program, which he describes as the state selling securities.

Gov. Phil Scott has suggested that the state's efforts to defend its handling of the EB-5 program may be at odds with transparency and accountability. Scott said late last month that the state's claim of immunity on EB-5 issues "doesn't give me a good feeling in my soul."

At a news conference Tuesday, Scott hedged his concern.

"He’s doing what he thinks is best to properly represent the state of Vermont," Scott said, referring to Attorney General T.J. Donovan.

The governor's legal counsel, Jaye Pershing Johnson, stepped up to the podium to say that the state's immunity protects taxpayers from costly lawsuits every time someone disagrees with a government decision.

Attorneys for the EB-5 investors are expected to respond to the state's arguments by Jan. 8.