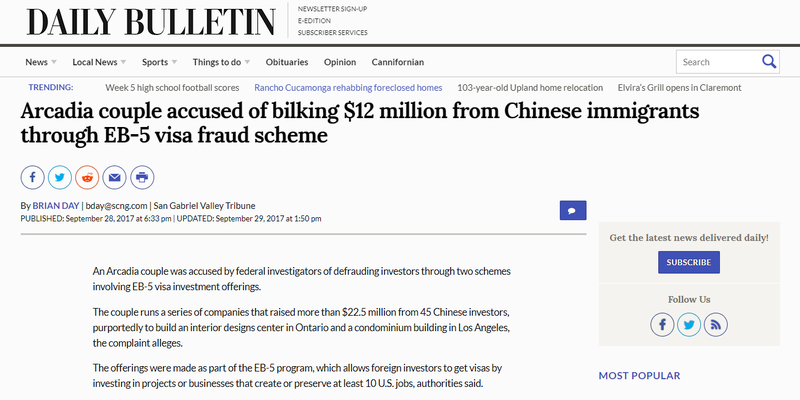 The couple runs a series of companies that raised more than $22.5 million from 45 Chinese investors, purportedly to build an interior designs center in Ontario and a condominium building in Los Angeles, the complaint alleges.

The offerings were made as part of the EB-5 program, which allows foreign investors to get visas by investing in projects or businesses that create or preserve at least 10 U.S. jobs, authorities said.

“But the SEC alleges that the Chens stole more than $12 million out of investor funds by issuing cashier’s checks to Jean Chen, transferring the money to affiliated entities and purchasing residential real estate completely unrelated to the two EB-5 projects,” the statement said. “The Chens allegedly misappropriated more than 91 percent of the money raised from investors in the interior design center project.”

The couple provided fraudulent documents to support the bogus investments and grossly exaggerated the scope of their projects.

“According to the SEC’s complaint, the purported (Ontario) center is an undecorated, half-empty warehouse space with one apparent employee, while reports submitted to (U.S. Citizenship and Immigration Services)  represented that the project is fully functional and has generated 345 jobs,” the statement said.

As a result of the investigation, SEC investigators announced Wednesday that the court had granted an emergency order to freeze the Chens’ bank account pending the ongoing investigation and litigation.

The court also froze the assets of all of the defendants and the four affiliates. A court hearing has been scheduled for Wednesday Oct. 4, on the SEC’s motion for a preliminary injunction.