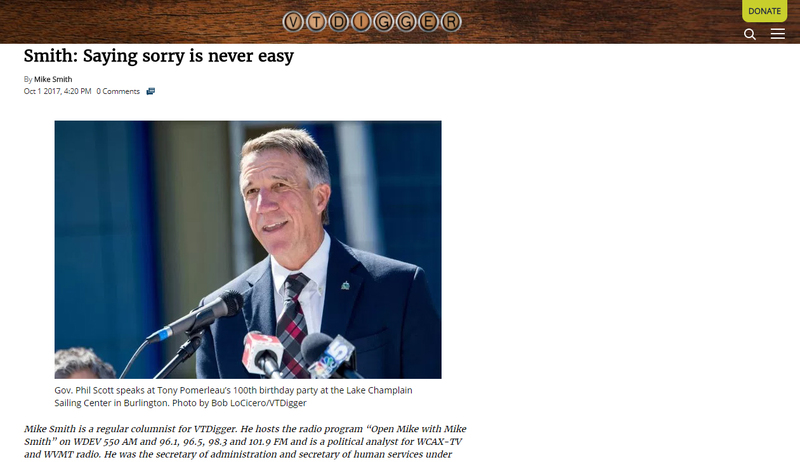 Mike Smith is a regular columnist for VTDigger. He hosts the radio program “Open Mike with Mike Smith” on WDEV 550 AM and 96.1, 96.5, 98.3 and 101.9 FM and is a political analyst for WCAX-TV and WVMT radio. He was the secretary of administration and secretary of human services under former Gov. Jim Douglas.

Here’s the question state officials should be asking themselves: Just because you can do something, should you be doing it?

Defrauded investors in Jay Peak Resort are suing state officials for negligence in their oversight of the EB-5 program.

In a court hearing last week, the Vermont Attorney General’s office argued that the state of Vermont is immune from the lawsuit and, as a result, officials are not required to release pertinent information hidden in state files.

Certainly, state government has enormous power and resources to make a legal argument of immunity —and perhaps win — but a more pertinent question is this: Should they?

Even Gov. Phil Scott questioned the state’s response. “When I read the media reports, when I hear immunity, and that’s the basis for an argument that we won’t know what’s happening — that the state is immune from litigation — that doesn’t give me a good feeling in my soul,” Scott said last week.

The governor could order the immediate release of approximately 50,000 of pages of documents pertaining to the EB-5 program that are still quarantined on state servers.

But he has yet to do so.

The communications, if released to the public, could answer the question that most Vermonters are asking about this scandal: What did state and federal officials know and when did they know it?

Tom Evslin, a former Douglas administration official, argues in a commentary that the state of Vermont is conflicted and that a special prosecutor needs to be appointed.

“Former officials and the state are being defended by the attorney general’s office, which is the state’s internal law firm and usually defends actions against the state; the accused officials are certainly entitled to a defense,” Evslin writes. “However, if the AG’s office role is defense and protecting the state, then who represents the citizens of the state if officials are guilty of wrongdoing? Are we totally dependent on the feds and/or private lawsuits to protect us against state government malfeasance?”

Scott seems to think the idea has merit and hasn’t ruled out the appointment of a special prosecutor.

Ironically, we also saw last week the new interim CEO of Equifax, Rego Barros, issue a public apology for his company’s actions related to a security breach that may have exposed the personal information—including names, social security numbers, and dates of birth—of 143 million Americans. “On behalf of Equifax, I want to express my sincere and total apology to every consumer affected by our recent data breach. People across the country and around the world, including our friends and family members, put their trust in our company. We didn’t live up to expectations,” Barros wrote.

The interim CEO then outlined his company’s failures and promised to fix the problems.

Barros was recently appointed to his position after former Chairman and Chief Executive Richard Smith and other top executives were either asked to leave or resigned from company.

Americans will demand that Barros follow through on his promises, and his apology should not prevent states, including Vermont, from suing Equifax over the breach.

An apology doesn’t get you off the hook, but it starts to restore confidence.

Compare and contrast Barros’ actions to that of Wells Fargo executives a year ago when news broke that employees enrolled as many as 2 million unsuspecting customers into bank products without their permission. In some cases customers were charged fees. All of this was done to meet quotas the bank had established for cross-selling different financial products.

Wells Fargo’s Chairman and Chief Executive Officer John Stumpf testified before Congress that the bank failed to meet its responsibility to customers. But astonishingly, he also revealed that no high level executives had been held accountable. Sen. Elizabeth Warren told Stumpf he should resign and return the money he made from the scam. “It’s gutless leadership,” Warren said. Eventually, Stumpf and other executives were forced to resign in the face of public outrage.

Vermont state officials also have a choice in how they can handle the state’s involvement in the EB-5 scandal.

They can chart a course that looks out for the public, is completely transparent and starts with an apology.

Or, they can protect state officials at the expense of the public, continue to hide information from Vermonters about mistakes made in the EB-5 program and hope that the issue eventually goes away.

The second choice is fraught with danger.

The dreams of 890 foreign investors who sought a pathway to U.S. citizenship and believed Vermont was a safe place to invest were crushed by the fraud. And they were not the only ones who were hurt. Vermonters lost jobs, contractors went bankrupt and lives were disrupted because a few elites allegedly had more of an interest in enriching themselves, or making themselves look better, than adhering to ethical and financial standards.

If Vermonters perceive that different rules apply to people with political connections, confidence in public officials will wane.

Last week I wrote about leadership and included a key tip.

You have to build trust by being honest, even when the news isn’t good. That ability to build trust is undermined by the state’s legal tactics against investors, coupled with the state’s refusal to release emails in a timely fashion and with no one—absolutely no one—in government willing to say to Vermonters, “I’m sorry,” for what happened.

Only when Vermont leaders are willing to do what is morally right, rather than what is legally expedient, will the taint of this scandal begin to fade.