Lawsuit: Jay Peak attorneys got $25,000 ‘kickbacks’ for each new investor 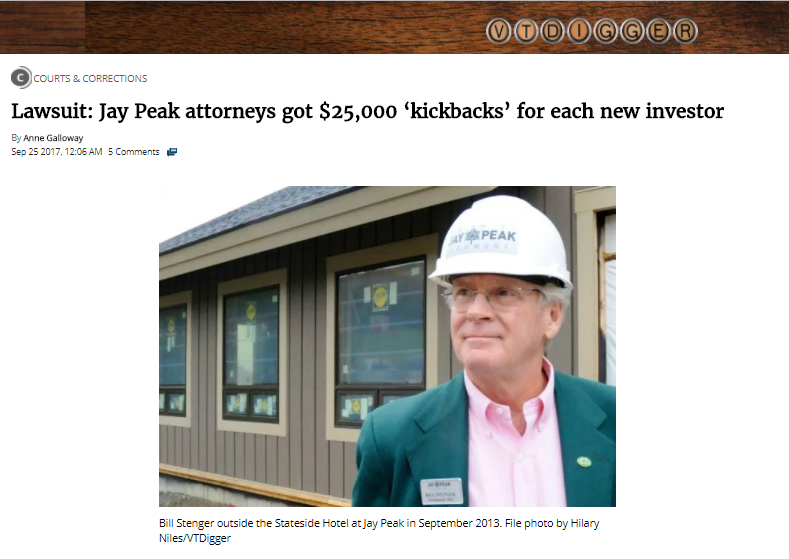 Plaintiffs in a lawsuit against the state allege that Bill Stenger, the former CEO and president of Jay Peak Resort, paid $25,000 to immigration attorneys in “kickbacks” for each new investor the lawyers brought into the projects.

New evidence shows that the $25,000 fee agreement was a fill-in-the-blank form Stenger sent to immigration attorneys. Payment was to be made within seven days of receipt of a copy of an investor’s temporary visa approval by U.S. Citizenship and Immigration Service. In the document provided, Jianming Shen, a New York City attorney, signed an agreement form with Stenger in 2010.

Wei Wang and four other plaintiffs in the lawsuit against the state say they were unaware that the attorneys they hired to help them through the EB-5 visa process were also getting payments from Stenger.

The investors say state officials with the Vermont EB-5 Regional Center, who were responsible for overseeing Jay Peak, never took action to investigate allegations about the so-called “finders fees,” which were brought to their attention in 2012.

Separate lawsuits have been filed by the investors against attorney Anthony Korda, who represented foreigners in early projects, including Hotel Jay and Tram Haus Lodge, and Shen, who was allegedly paid by Stenger to “funnel” 70 investors into a bogus biomedical facility in Newport.

Case against state heads to court

The first hearing in the investors’ case against the state will be Monday morning in Lamoille County Superior Court where arguments regarding discovery will be laid out by the Barr Law Group, on behalf of the investors, and the Vermont Attorney General’s office, which is defending 10 current and former state officials and three state agencies.

Megan Shafritz, the lead lawyer for the state, has said Vermont officials have “absolute immunity” in the case, which protects them “from the burdens of discovery and litigation generally.”

Shafritz has urged the court to block the release of documents and the deposition of a key witness in the investors’ case until after the court has ruled on a motion to dismiss, which the attorney general’s office has yet to file. Attorneys for the state asked for an extension earlier this month.

The Lamoille County Superior Court put a stay on discovery in July.

Russell Barr, the owner of Stowe Aviation and Barr Law Group, is the lead attorney in the class action investor lawsuit against the state, which alleges that the regional center acted as a partner in the Jay Peak fraud.

Unless the court allows discovery, Barr says, the truth will never come out about how state officials allowed Stenger and Jay Peak owner Ariel Quiros to defraud 890 EB-5 investors and ultimately helped to cover up the fraud.

“The state will argue [in court] that they cannot be brought to justice and, more importantly, no fact finding or truth seeking discovery can even take place,” Barr said in an email.

A letter from the U.S. Citizenship and Immigration Service bolsters the plaintiffs’ assertion that the Vermont EB-5 Regional Center officials stood by as the Jay Peak developers defrauded investors over an eight-year period.

Last month, USCIS threatened to terminate the state regional center citing “the Regional Center’s failure to provide adequate oversight and monitoring of its projects allowed the alleged malfeasance by Quiros and Stenger to occur and jeopardize the Regional Center’s ability to promote economic growth within EB-5 program requirements, as well as the EB-5 investors’ investments.”

The investor lawsuit cites the USCIS notice of intent to terminate the Vermont EB-5 Regional Center as proof that the state was complicit in the fraud.

Quiros and Stenger are accused of misusing more than $200 million in foreign investor funds. The two developers collected about $490 million through the Vermont EB-5 program from 2008 through April 13, 2016. On that date, federal regulators brought 52 counts of securities fraud against Quiros and Stenger. Both men remain under criminal investigation, have pleaded no contest to the charges and have agreed to the facts in the Securities and Exchange Commission case.

The Ponzi-like scheme started when Stenger and Quiros used investor money to purchase the resort instead of investing in specific developments as promised, according to the SEC. Quiros is accused of stealing as much as $191.8 million, according to federal regulators who say he couldn’t have perpetrated the fraud without the aid of Stenger, who was the front man for the operation and had direct dealings with investors.

In February 2012, Douglas Hulme, owner of Rapid USA, an EB-5 middleman who worked for Jay Peak, announced to 100 immigration attorneys that he no longer had faith in representations about the finances made by Stenger and Quiros.

In the case against the state, investors say that immediately after Hulme’s announcement, James Candido, the former director of the Vermont EB-5 Regional Center, reassured investors that the Jay Peak projects were a safe investment.

Based on assurances from Candido, investors believed that the state was properly monitoring the projects and protecting their investments.

But Candido was actually protecting the Jay Peak developers from scrutiny, according to the lawsuit. He and other officials with the commerce agency “misrepresented state oversight” and the “viability” of the Jay Peak projects “in order to induce investors into becoming investors,” the Barr Law Group writes.

In March, a month after Hulme’s revelations, an investor wrote to John Cronin, the then-director of the Vermont Department of Financial Regulation, with “deep concerns” about Jay Peak. Cronin responded by email that the Vermont Securities Division “was not conducting an investigation of Jay Peak.”

Not long after, Michael Gibson, of USAadvisors.org, a group that analyzes EB-5 projects, warned state officials that they were failing to properly oversee the marketing of the projects to foreign investors.

Gibson alleged in an April 2012 letter to Cronin, Candido and John Kessler, the general counsel for the commerce agency, that the Jay Peak developers were giving immigration attorneys “finders fees” for new investors in the projects. He warned that the state should investigate the matter immediately, because finders fees violate securities laws, which prohibit immigration attorneys who are supposed to be representing investors from simultaneously representing the interests of developers.

State officials ignored Gibson’s advice and worked “directly with their Jay Peak partners” to engage in a “crusade of obfuscation and frivolous accusations” against Hulme and Rapid USA Visas, “resulting in an outright cover-up,” according to the lawsuit.

“Continuing as if there was nothing wrong, and continuing to concoct the outward appearance of legitimacy,” state officials touted the next phase of the Jay Peak projects, Barr writes.

In September 2012, Gov. Peter Shumlin, Rep. Peter Welch, Sens. Patrick Leahy and Bernie Sanders, participated in a daylong press conferenceat Jay Peak, in which Stenger and Quiros announced that having completed $200 million worth of projects at the Jay Peak Resort, they would use more than $500 million in additional EB-5 funds to bring four more large-scale projects to the Northeast Kingdom, including a biomedical facility (AnC Bio Vermont), a conference center and marina, an office and retail block on Main Street in Newport, a new airport terminal in Coventry, a window manufacturing plant and an indoor and outdoor Olympic athletic center at Burke Mountain Resort.

Four months later, the developers announced the completion of Hotel Jay. The lawsuit alleges that Stenger and Quiros double sold the top floor of the hotel to two separate groups of investors with the blessing of the Vermont EB-5 Regional Center.

Stenger and Quiros seized ownership of the Tram Haus Lodge without the consent or knowledge of investors in 2013. Six months later, investors in the first project at Jay Peak complained that they had been mistreated.

In a memo to state officials, Tony Sutton, a plaintiff in the lawsuit, detailed the failure of the Vermont EB-5 Regional Center to protect investors. Pat Moulton, the commerce secretary at the time, claimed the Vermont EB-5 Regional Center did not have the authority to vet the Jay Peak projects and that Sutton and the other investors had not “identified a violation of any of the federal laws and regulations governing the EB-5 program.”

In an email, Moulton “discounted” the investors concerns and said it was “not only unreasonable, but impossible, to expect reporting of where individual dollars are spent in a multi-investor project.”

Investor funds were supposed to be held in escrow. Instead, the money was commingled from the beginning.

Even then, the state did not put a halt to the Ponzi scheme. Stenger and Quiros continued to bring in new investors right up until the SEC shut them down in April 2016.