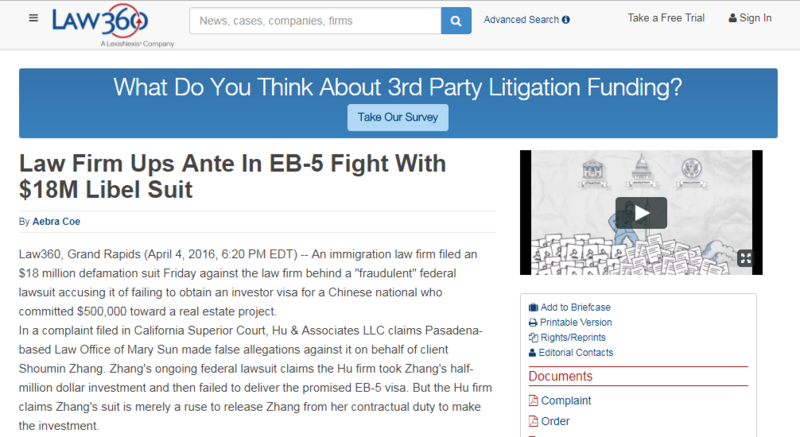 An immigration law firm filed an $18 million defamation suit Friday against the law firm behind a "fraudulent" federal lawsuit accusing it of failing to obtain an investor visa for a Chinese national who committed $500,000 toward a real estate project.
In a complaint filed in California Superior Court, Hu & Associates LLC claims Pasadena-based Law Office of Mary Sun made false allegations against it on behalf of client Shoumin Zhang. Zhang's ongoing federal lawsuit claims the Hu firm took Zhang's half-million dollar investment and then failed to deliver the promised EB-5 visa. But the Hu firm claims Zhang's suit is merely a ruse to release Zhang from her contractual duty to make the investment.

“The fraudulent lawsuit contained 11 false causes of action and plaintiffs have spent valuable time and resources refuting those false charges,” Friday's complaint said. “As a direct and proximate result of the publication of these false allegations and defamatory statements, plaintiffs have suffered general and special damages, the full nature, extent and amount of these damages are currently unknown but are believed to be not less than $18 million, which will be estimated at trial.”

Hu & Associates, which also named a handful of media companies and their employees in its complaint, said that subsequent media reports in Chinese-language publications furthered the alleged defamation of the Hu firm's lawyers named in Zhang's lawsuit.

The litigation in state court escalates what has been a contentious dispute in California federal court in the three months since Zhang, a citizen of China, launched her complaint.

Hu & Associates is currently seeking sanctions in the federal litigation. And on March 30, a California federal judge reversed a default judgment previously entered against the Hu firm after it failed to file a timely response to Zhang's suit.

In his order, U.S. District Judge Manuel L. Real concluded that the law firm “unquestionably” made errors when it came to the timing of its response, but those errors do not appear to have been made in bad faith.

“Defendants also likely have a meritorious defense to this case,” Judge Real said. “To date, this court has granted every motion to dismiss filed by the various defendants against [Zhang].”

Zhang claims to have been “fraudulently induce[d]” to buy a membership unit in the development project “Americana One” for $500,000 to qualify for an EB-5 visa. The EB-5 program offers foreign nationals green cards in exchange for investments in American projects that create at least 10 jobs.

Zhang said attorney John Hu, whose firm she hired to help broker the investment and file the I-526 visa petition, told her the value of the project was $8 million, but she later discovered the project was worth less. She claimed her I-526 petition was subsequently denied and that the investment consortium reneged on an agreement to refund her full investment unless she agreed to use about $38,000 of it to pay legal fees to Hu.

The law firm in the past couple months has aggressively defended against the claims and called the suggestion that Zhang's petition was denied a “big lie.” It says she got cold feet on the project when she realized she wouldn’t be able to substitute her daughter on the visa application.

Per the terms of the investment agreement, she could exit the project and get a full refund if the application were denied, but not if it were withdrawn, the firm said.

Representatives for both sides could not immediately be reached for comment Monday.

Counsel information was not available for the Law Office of Mary Sun.