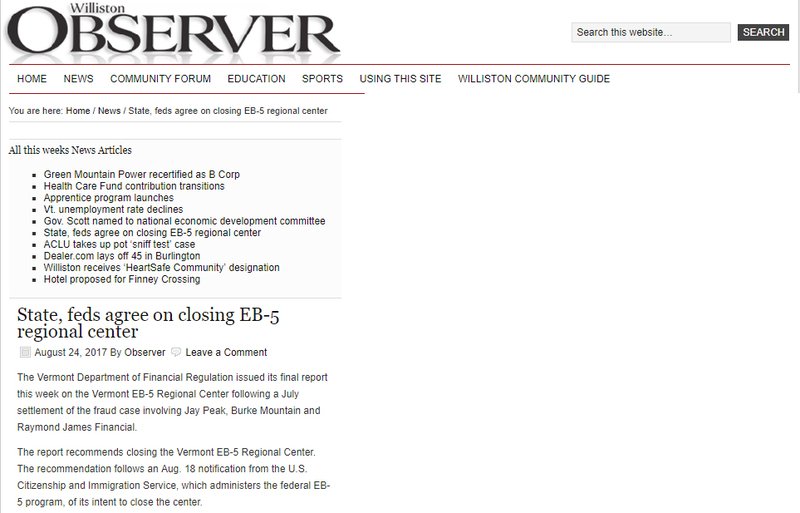 The report recommends closing the Vermont EB-5 Regional Center. The recommendation follows an Aug. 18 notification from the U.S. Citizenship and Immigration Service, which administers the federal EB-5 program, of its intent to close the center.

The Gov. Phil Scott administration plans to coordinate with USCIS on the closure. “It is clear from our review that state government was not, and is not, the best-suited entity for managing the EB-5 program,” said Michael Schirling, secretary of the Vermont Agency of Commerce and Community Development.

“It is our hope that USCIS will agree with our approach for a staggered closure to minimize any adverse economic impact and ensure investors in existing, viable projects are protected.” The state report concludes that Vermont took corrective actions in 2014 and currently has stronger regulatory, compliance and oversight measures in place.

“While the state has taken important steps to improve oversight of the EB-5 program since the alleged fraud was uncovered, the evolution of the EB-5 program across the U.S. and here in Vermont make closing the Vermont Regional Center an appropriate action,” Scott said.

“The alleged fraud at the Jay Peak projects was devastating for the region, investors and contractors and has had a lasting impact on Vermont,” Scott continued. “It was critical as a new administration to have an accounting of the lessons learned, as well as an analysis that could inform whether to continue or end operations of the Vermont Regional Center.