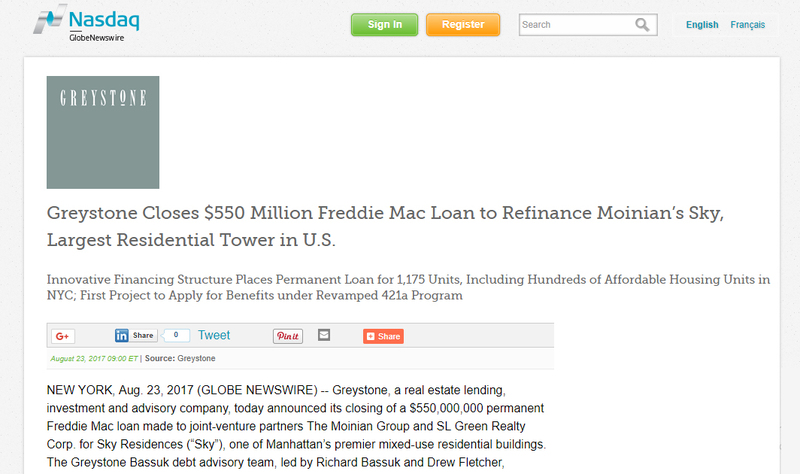 Innovative Financing Structure Places Permanent Loan for 1,175 Units, Including Hundreds of Affordable Housing Units in NYC; First Project to Apply for Benefits under Revamped 421a Program

Greystone, a real estate lending, investment and advisory company, today announced its closing of a $550,000,000 permanent Freddie Mac loan made to joint-venture partners The Moinian Group and SL Green Realty Corp. for Sky Residences (“Sky”), one of Manhattan’s premier mixed-use residential buildings. The Greystone Bassuk debt advisory team, led by Richard Bassuk and Drew Fletcher, represented the Borrower and assisted in obtaining the Freddie Mac loan through Greystone’s Affordable Lending team. The transaction marks the largest-ever single-asset tax-exempt financing completed by Freddie Mac and a first-of-its-kind private placement structure that includes permanent financing for hundreds of affordable housing units in New York City. Steve Rosenberg, CEO of Greystone, together with Billy Posey, Joe Mosley, and Jeff Englund, collaborated with Freddie Mac on the structure for Moinian and SL Green, and spearheaded the loan process for Greystone.

The Freddie Mac loan completes an exit from the original construction financing provided by Bank of China and Union Labor Life Insurance Company in 2014. The permanent loan was structured as a direct purchase by Freddie Mac of the HFA bonds with a pre-stabilized funding and early spread lock. Freddie Mac completed the direct purchase of the bonds with plans to securitize the bonds in a single-asset securitization, a first-of-its-kind structure that provided certainty of execution while also delivering pricing far below a standard bond credit enhancement. The structure was put in place under the Affordable New York Housing Program, the city’s revamped 421-a tax abatement program.

“Sky brings more than 1,100 new apartments—25 percent with long-term affordability restrictions—to the front lines of the affordable housing crisis,” said David D. Leopold, Vice President, Targeted Affordable Sales & Investments at Freddie Mac Multifamily. “Such a large, complex transaction took a strong partnership between Freddie Mac, the New York State Housing Finance Agency, Greystone, and The Moinian Group. I thank them for their dedication to increasing the amount of affordable rental units in an area that critically needs it.”

“The Moinian Group is extremely proud to deepen its relationship with Freddie Mac with this ground-breaking transaction,” said Joseph Moinian, CEO and Founder of The Moinian Group. “David Brickman, David Leopold and the entire senior leadership team at Freddie Mac worked tirelessly alongside Steve Rosenberg and his counterparts at Greystone, to deliver a one-of-a-kind execution for the premier asset in our portfolio. For more than 20 years we have been investors along the Far West Side, where we own more than four million square feet. Our enthusiasm for the neighborhood is greater now than ever before.”

“We are thrilled to have collaborated successfully with Freddie Mac and Greystone’s lending team to deliver such a market-leading execution for Moinian’s premier project, Sky,” said Drew Fletcher, President, Greystone Bassuk. “This financing marks the culmination of over a decade of investment by Joe Moinian which has catalyzed the development of Manhattan’s Far West Side into one of the City’s most dynamic and fastest-growing residential neighborhoods.”

“While mixed-income multifamily lending deals of this size don’t occur every day, it’s truly gratifying to know that Freddie Mac’s commitment to affordable housing can be applied in such an impactful way,” said Jeff Englund, Senior Managing Director of Greystone’s Affordable Lending group. “Affordable housing is desperately needed in New York and nationwide, and Greystone remains committed to helping to finance transactions that create or preserve this housing for the long-term.”

About Freddie Mac
Freddie Mac makes home possible for millions of families and individuals by providing mortgage capital to lenders. Since our creation by Congress in 1970, we've made housing more accessible and affordable for homebuyers and renters in communities nationwide. We are building a better housing finance system for homebuyers, renters, lenders and taxpayers.

About Greystone
Greystone is a real estate lending, investment and advisory company with an established reputation as a leader in multifamily and healthcare finance. Its range of services includes commercial lending across a variety of platforms such as Fannie Mae, Freddie Mac, CMBS, FHA, USDA, bridge and other proprietary loan products. Loans are offered through Greystone Servicing Corporation, Inc., Greystone Funding Corporation and/or other Greystone affiliates.

About Moinian Group
Founded in 1982, The Moinian Group is one of the country’s largest privately-held real estate firms, with diverse holdings in residential, commercial and retail properties covering over 20 million square feet across major cities including New York, Chicago, Dallas and Los Angeles.

Moinian and SL Green are two of the most active and prominent real estate companies in New York City. Moinian is the developer of Sky, with SL Green serving as a 20% equity investor in the project.