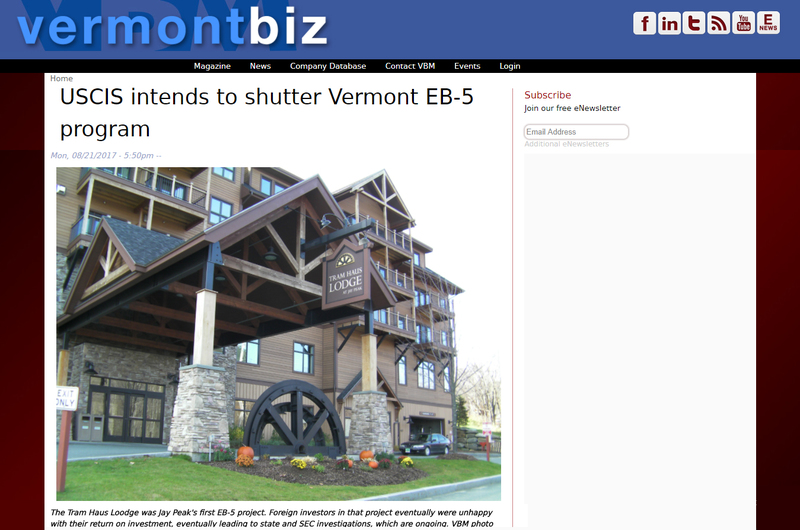 The Tram Haus Lodge was Jay Peak's first EB-5 project. Foreign investors in that project eventually were unhappy with their return on investment, eventually leading to state and SEC investigations, which are ongoing. VBM photo

Vermont Business Magazine The federal government on Friday informed the state that it will seek to close Vermont's foreign investment program, widely known as EB-5, because of the fraud allegations involving Jay Peak and related projects. Federal and state charges of a $200 million fraud against the developers were revealed in April 2016. The Scott Administration separately announced today that it has prepared a report to slowly close the Vermont Regional Center by no longer taking on new projects, but overseeing existing ones. New EB-5 centers would be privately run, as the one at Mount Snow currently is organized. The state would need approval from US Citizenship and Immigration Service (USCIS), which administers the EB-5 program, in order to continue with the VRC in a limited role.

Following the court’s approval of a settlement with Raymond James Financial this past April to reimburse Jay Peak and Burke Mountain creditors, Governor Phil Scott, on July 5, directed the Vermont Department of Financial Regulation (DFR) to conduct a programmatic review of the operations of the Vermont EB-5 Regional Center (VRC). The review focused on assessing the lessons learned from the alleged fraud at Jay Peak projects, determining whether the structural changes made to the program in response were sufficient to protect the Vermont economy and investors, and making recommendations for the future of the VRC.

“The alleged fraud at the Jay Peak projects was devastating for the region, investors and contractors, and has had a lasting impact on Vermont. It was critical as a new Administration to have an accounting of the lessons learned, as well as an analysis that could inform whether to continue or end operations of the Vermont Regional Center,” said Gov. Scott.

The final report outlines the following:

In the report, DFR Commissioner Michael Pieciak, in consultation with Michael Schirling, Secretary of the Agency of Commerce and Community Development (ACCD) – which manages the VRC – concludes that the State took corrective actions in 2014 and currently has stronger regulatory, compliance and oversight measures in place.

However, given the growth of privately-managed EB-5 regional centers across the country, and recognizing that operating a regional center is a function best performed by a private entity, the report recommends winding down the Center’s work. It would continue to oversee existing projects, but would not take on new projects.

On August 18, prior to the scheduled release of the report, the state received notification from the US Citizenship and Immigration Service (USCIS), which administers the EB-5 program federally, of its intent to terminate the Center. USCIS’ concerns centered on the alleged fraud perpetrated by Jay Peak principals Ariel Quiros and Bill Stenger, for which the State is currently pursuing a civil fraud case.

The outcome USCIS seeks is generally aligned with the Scott Administration’s recommendation to close the VRC. The state hopes to coordinate with USCIS to address the closure in a way that ensures stability for Vermont’s economy and protects employees, contractors and investors in the projects. The state will respond to USCIS accordingly, and more information on this process will be issued as available.

“As our report details, the Scott Administration agrees that the Center should ultimately be closed. It is clear from our review that state government was not, and is not, the best-suited entity for managing the EB-5 program,” said Secretary Schirling. “It is our hope that USCIS will agree with our approach for a staggered closure to minimize any adverse economic impact and ensure investors in existing, viable projects are protected.”

“While the State has taken important steps to improve oversight of the EB-5 program since the alleged fraud was uncovered, the evolution of the EB-5 program across the US and here in Vermont make closing the Vermont Regional Center an appropriate action,” said Scott.

EB-5 encourages foreign investment into approved projects that create American jobs.  For each investor a minimum of 10 jobs must be created, which can be direct or indirect.  The minimum investment is $500,000 for nearly all of Vermont. This investment must be “at risk” and cannot be guaranteed. The investors could get their permanent "green card" for themselves and their family, if the project meets the employment goals, and get all their money back with, perhaps, a positive return if the project is financially successful.

Regional centers must be approved by USCIS. Vermont has been the only regional center run by a state government.