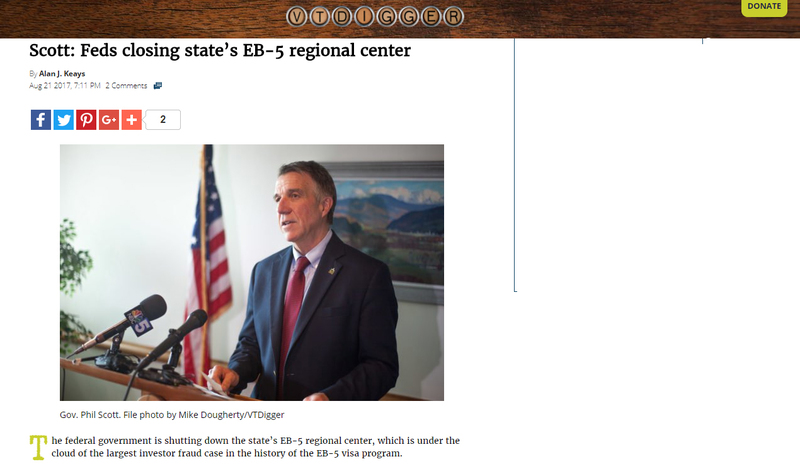 The federal government is shutting down the state’s EB-5 regional center, which is under the cloud of the largest investor fraud case in the history of the EB-5 visa program.

The action is a result of concerns raised by alleged fraud involving hundreds of millions of dollars by two Vermont developers over an eight-year span, according to the notice sent to the state. Jay Peak owner Ariel Quiros and Bill Stenger, the resort’s former president, are accused of misusing money that foreigners invested in several projects through the EB-5 program.

The 27-page notice contains some stinging criticism of past operations of the regional center, including a lack of action and oversight as those developers raised money from immigrant investors. The EB-5 program offers foreigners permanent residency in exchange for investments in qualifying projects.

“It appears that for years (the Vermont Agency of Commerce and Community Development Regional Center) relied excessively — if not primarily — on third party project managers to perform oversight functions rather than taking on those responsibilities itself,” the notice reads.

“Even where a regional center has an outside party providing management services — as occurred here — the ultimate responsibility for compliance with the relevant statutes and regulations, remain with the regional center itself.”

The notice also says the regional center “failed to properly engage in management, monitoring and oversight of the program for many years, as required by the program.”

The notice adds, “USCIS has determined, by a preponderance of the evidence that the Regional Center no longer serves the purpose of promoting economic growth.”

Quiros and Stenger are accused in lawsuits by federal and state regulators of misusing $200 million of $350 million raised from immigrant investors through the EB-5 program.

The money was meant to fund massive upgrades at Jay Peak, a hotel and conference center at Burke Mountain, and two other projects that never got off the ground in Newport, including a $110 million biomedical research center.

The notice of termination by USCIS follows action in July 2016 when the federal agency asked the state to submit an interim application for renewal of the Vermont EB-5 Regional Center designation in light of the fraud allegations against the developers.

The news of the termination came in the same release announcing the results of a review the Scott administration began in July of the EB-5 program and future of the regional center.

That report recommends “winding” down the regional center, the governor’s release stated.

“As our report details, the Scott administration agrees that the center should ultimately be closed. It is clear from our review that state government was not, and is not, the best-suited entity for managing the EB-5 program,” Commerce and Community Development Secretary Michael Schirling said in the statement from the governor’s office.

“It is our hope that USCIS will agree with our approach for a staggered closure to minimize any adverse economic impact and ensure investors in existing, viable projects are protected.”