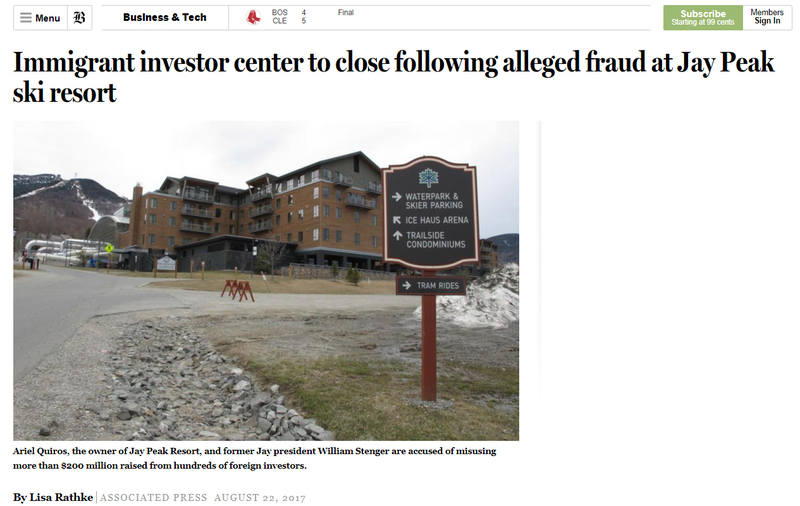 Ariel Quiros, the owner of Jay Peak Resort, and former Jay president William Stenger were accused last year of misusing more than $200 million raised from hundreds of foreign investors through the EB-5 visa program for developments at or near the ski resort.

The USCIS said in an Aug. 14 letter to the state that it intends to close the center because it no longer serves the purpose of promoting economic growth by failing to properly manage, monitor, and oversee EB-5 projects. It also said it appears that the center’s project managers used EB-5 funds for purposes unrelated to the job creating business activities for new commercial enterprises and job creating enterprises.

‘‘Certainly better Regional Center oversight of the projects may have prevented this,’’ the USCIS said.

Scott said Monday that he directed the Vermont Department of Financial Regulation to review the center’s operations in July, after a court approved a settlement with the financial firm Raymond James to reimburse Jay Peak and Burke Mountain creditors.

‘‘The alleged fraud at the Jay Peak projects was devastating for the region, investors and contractors, and has had a lasting impact on Vermont,’’ he said. ‘‘It was critical as a new Administration to have an accounting of the lessons learned, as well as an analysis that could inform whether to continue or end operations of the Vermont Regional Center.’’

In the state report released Monday, DFR Commissioner Michael Pieciak, working with Michael Schirling, secretary of the Agency of Commerce and Community Development, which manages the center, concluded that the state now has stronger regulatory, compliance and oversight measures in place after taking corrective actions in 2014.

But it recommended winding down the center and eventually closing it, and said the function is best performed by a private entity.

‘‘It is our hope that USCIS will agree with our approach for a staggered closure to minimize any adverse economic impact and ensure investors in existing, viable projects are protected,’’ said Schirling.

Stenger has settled civil charges with the US Securities and Exchange Commission. Quiros’s lawyers have said he will be cleared of any wrongdoing.