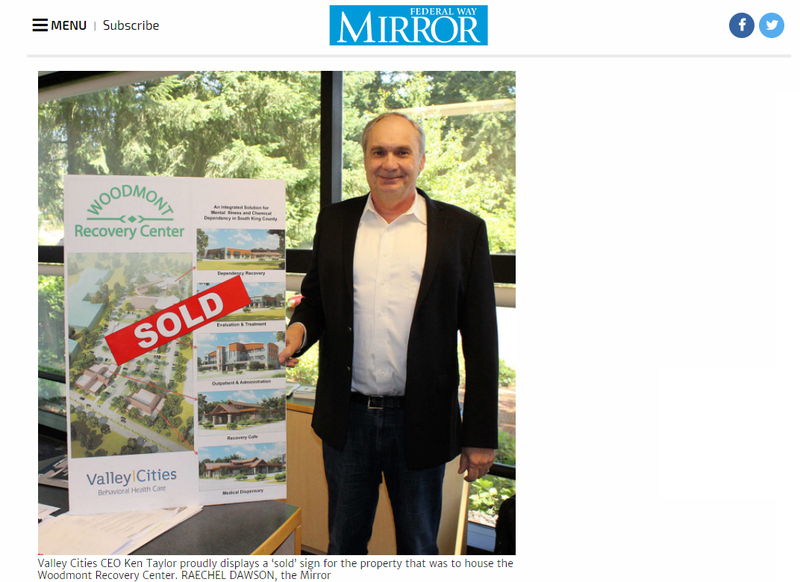 Valley Cities CEO Ken Taylor proudly displays a ‘sold’ sign for the property that was to house the Woodmont Recovery Center.

Two years after 250 angry parents filled a school gym in outrage against a proposed Valley Cities rehab facility that would be near a school, the 8-acre property the campus would have sat on has sold for $6 million.

The Des Moines property at South 272nd Street and Pacific Highway South will instead be home to 760 units of apartments, an extended-stay hotel and senior housing.

“The community really came out and supported us,” Lai said about the multi-family project in which community input was sought early on in the process. “…We wanted to get the community well-informed on what we’ll do.”

When all is said and done, Lai and his companies will have invested $120 million into the project.

The project is quite different from the 2015 proposed Woodmont Recovery Center, a “one-stop shop” campus for those experiencing mental health and drug and alcohol addiction that was initially intended for the site.

And while Valley Cities decided against building the rehab facility, CEO Ken Taylor said administrators been able to turn lemons into lemonade.

“By this not happening, we’ve actually been able to leverage millions of dollars that allows us to create much larger resources than we would have,” Taylor said.

Valley Cities initially proposed the Woodmont Recovery Center to include five buildings: An evaluation and treatment center with 16 involuntary and eight voluntary beds; a three-story outpatient and administration building; a dependency recovery center; a recovery cafe; and a medical methadone dispensary, which was taken out of plans before the backlash, yet still was a cause of concern for many.

But because plans for the campus dissolved, Taylor said Valley Cities will be able to provide 100 beds for those seeking help instead of the original 24. Nearly 70 detox and recovery beds will be at a dependency recovery center in Beacon Hill, set to open in about three months, and 32 beds at an evaluation and treatment center in Kent, set to open in spring 2018.

Valley Cities has been growing rapidly to accommodate the increased need.

Six years ago, Valley Cities was seeing 300-400 people a year but now it sees that amount each month.

That increase stems from a nationwide opioid epidemic but also wider access to health care through the Affordable Care Act.

“We see with the Affordable Care Act are individuals and families, children, teens, young adults all the way to seniors getting services they didn’t have access to before,” Simonsen said. “And that is helping to bring families back together, get people back to work, get people back to school, creating better environments for the family and individuals and our communities.”

In total, once completed, Valley Cities will have increased its eight locations to 18 with a handful in north Seattle. Its reach will extend as far north as Lake City and as far south as Enumclaw.

A continual concern, however, is finding locations for outpatient treatment facilities.

“All of our outpatient locations are literally overrun in terms of, we just don’t have enough space,” Taylor said.

Taylor said six out of seven people will likely fail after they go to a rehab facility, but outpatient counseling following treatment increases the success rate.

Simonsen said the move won’t address the need for more outpatient locations, but it will create a “campus-like” setting as it will be near the Multi-Service Center, King County Public Health, Healthpoint, the Day Center and a new 16-bed evaluation and treatment center run by Telecare.

“The nice thing is it creates a quasi-campus within a couple of blocks and is in pretty easy proximity to the highway for transportation services,” Taylor said.

In the past, owners of local businesses in the area of the “quasi-campus” have been against bringing those services into the area. In 2016, Paula Cloner, owner of Fantasium Comics and Games, said people have come into her store’s bathroom to do drugs. And Fans Miller, the director of operations for Logic Staffing, said he had to impose a special policy for his employees during opening and closing for protection.

Simonsen said their response to the backlash is similar to what they said to those who opposed the Woodmont Recovery Center: Valley Cities, as well as the rest of the organizations in the campus, are providing services to people who are already in the community and in need.

In fact, two women who frequent the day center recognized that clients who utilize those services are looked at very carefully, Simonsen said. To help, they have been showing up early to pick up trash around the area so they could make sure they can continue to have those services.

As for the recovery cafe, Valley Cities opened Phoenix Rising in Auburn, which provides 24 apartment units for formerly homeless youth and young adults.

Taylor describes it as the “coolest thing since sliced bread.”

The 4,000-square-foot facility will also help people get jobs skills and training. They’ll learn to work in a commercial kitchen and eventually make meals for the evaluation and treatment center in Kent that will open next spring.

“So we’re literally going to teach clients or former clients the skills of the culinary arts, if you will, and they will make meals and put them on serving trays and load them on the van and drive them from Auburn to Kent where there is no kitchen facility,” Taylor said. “The 32 people who are staying there will actually get meals prepared [at the recovery cafe] and will be training and actually paying people who are working in the cafe to do that.”

And, as previously mentioned, the medical methadone dispensary was taken out of plans early on in the process. Evergreen Treatment Services, one of Valley Cities’ partner for the proposed campus, opened their dispensary in Renton two years ago.

Yet, the idea for a dispensary has quickly become a thing of the past. Valley Cities, as well as many health care providers, are now opting to prescribe Suboxone or Buprenorphine. Taylor said the two drugs suppress people’s cravings and are “really important” in the treatment of opioid addictions. The drugs even negate the feeling of “getting high” from an opioid if one does use, Simonsen added.

“So we now have almost two-dozen medical staff who are trained to prescribe Suboxone and you’re going to see countywide hundreds of providers being trained to provide Suboxone,” Taylor said. “So, something like a dispensary, while it’s important for some people and greatly controversial for others,

it’s going to become something far less common in the future.”

And while Valley Cities has no current plans to place services in the north Federal Way area, the controversy over the Woodmont Recovery Center’s proposed location did spark a conversation among city officials, legislators and Congress members.

“Just like the opioid crisis and people living in the woods, this whole exercise in Woodmont has raised awareness of the needs in the community for mental health treatment and reaching out to people that are homeless and addicted,” Simonsen said. “And when we get more people in local, city and state governments that recognize this is going on, and they have an opportunity to see and hear people talk about it and the recoveries they’re going through, they become strong proponents of continuing to provide funding so that we can provide these services.” 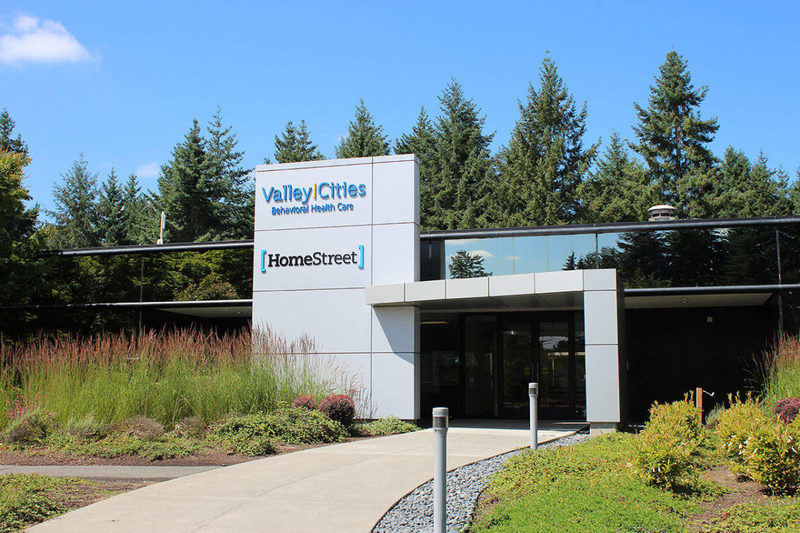 Valley Cities’ administrative offices are located at 33405 Eighth Avenue South in Federal Way. They have currently have eight locations with comprehensive services and expect to have 18 total locations from Lake City to Enumclaw when all projects are complete.